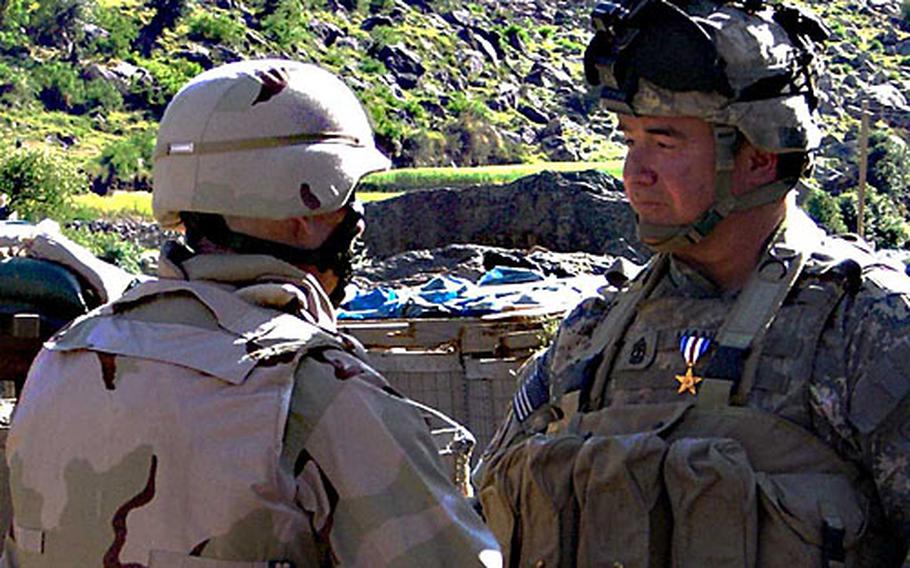 A first sergeant has received the Silver Star for showing courage and determination in an intense firefight in Afghanistan even after he was seriously wounded with shrapnel, officials said.

Mangels was at vehicle patrol base Combat Main in Kunar Province when it came under fire on both sides of the Pech River the night of Oct. 6, 2006, according to a news release from the Combined Joint Task Force-82 Combined Press Information Center.

Mangels directed return fire from a machine gun mounted on his vehicle, officials said. In an ensuing conflict, he was wounded in the head with shrapnel and lost consciousness. Regaining consciousness, he moved between fighting positions to rally his men and provide guidance.

&#8220;He actually still had shrapnel in his head, but he wouldn&#8217;t even let me look at him until he knew all of his soldiers were fine,&#8221; said Army Staff Sgt. Guy Lamb, a fire support noncommissioned officer with the unit.

Mangels allowed himself to be treated and eventually evacuated only after the last wounded soldier was evacuated, officials say.

Silver StarThe Silver Star calls for &#8220;gallantry in action while engaged in combat against an enemy or while serving in combat with friendly foreign forces.&#8221; The required gallantry, &#8220;while less than that of the Distinguished Service Cross, must nevertheless have been performed with marked distinction.&#8221;