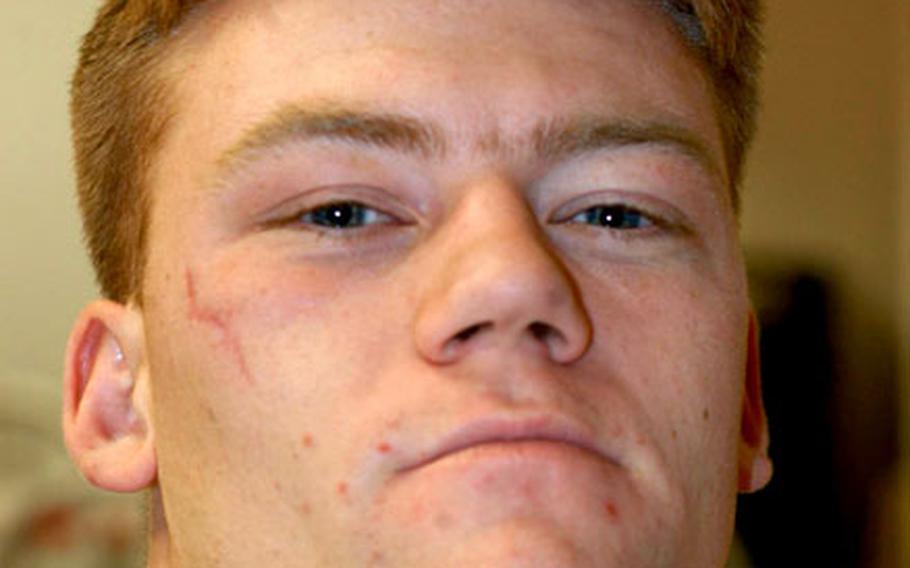 Anthony Hewitt says he thought he was taking Tylenol when he used the Valium pills that led to his discharge. (Kent Harris / S&S)

VICENZA, Italy &#8212; Anthony Hewitt figured he had a few months left to serve in Afghanistan. In fact, he thinks he should still be there.

But he says he made a mistake in September that sent him back to Italy &#8212; and eventually out of the Army. He was set to board a plane back to the States on Wednesday after being administratively discharged.

Hewitt, a member of the 1st Battalion, 508th Infantry Regiment, said in an interview Tuesday that he mistakenly took a pair of Valium pills while stationed at Orgun-E, a forward operating base, in September. He said he believed he was taking Tylenol, because the soldier who gave him the pills handed them to him in a Tylenol bottle.

The 23-year-old said he confronted the soldier who gave him the pills and was told he had been given Valium. He said he then decided to let the medication go through his system and carry on like nothing had happened.

But Hewitt, a specialist at the time, was confronted by a noncommissioned officer who noticed he was looking groggy.

Since he didn&#8217;t have a prescription for Valium, that&#8217;s a violation of Article 112a of the Uniform Code of Military Justice: use of a controlled substance while receiving special pay.

Several other soldiers &#8212; whose names couldn&#8217;t be obtained &#8212; faced Article 15 punishments on base for similar offenses. An Article 15 is a form on nonjudicial punishment that can be given for minor offenses by a servicemember&#8217;s commander.

Hewitt was reduced to E-1, docked two months&#8217; pay, given extra duty and restricted to base. He also was given an other-than-honorable discharge.

When news reached his parents, both retired senior NCOs, they were not happy.

Rick Hewitt, a former sergeant first class who now works as a civilian for the Army Review Boards Agency, wrote a long e-mail to Stars and Stripes detailing his son&#8217;s situation.

In it, he argues that the punishment was too severe, especially considering the circumstances his son was in. And he points out his son received similar medication after being diagnosed with post-traumatic stress disorder once he was sent back to Vicenza following the Article 15 hearing.

Anthony Hewitt said he has never been in trouble in the Army and asked for the Tylenol at Orgun-E because he was having trouble sleeping. A friend had been killed by a roadside bomb three days earlier.

It&#8217;s possible those circumstances did count in his favor, though.

Col. Jeffery McKitrick, the staff judge advocate for Combined Joint Task Force-76, said the Privacy Act of 1974 prohibits the military from discussing details of such a case.

&#8220;There are some aspects to this situation that I can&#8217;t comment on that might be different from what you have might have heard,&#8221; he said in a telephone interview Wednesday from Bagram Air Base.

He said he couldn&#8217;t confirm any details of a punishment Hewitt might have received, but said administrative actions had taken place at Orgun-E.

&#8220;There were other soldiers involved and action has been taken by the command in regards to all the other soldiers,&#8221; he said. He declined to discuss any of the punishments.

McKitrick said in a case such as Hewitt describes, the command could have been more lenient, but it could have been much harsher, too. Charges could have been referred to a court-martial and, if a soldier were found guilty there, he could face 10 years in prison as well as a bad-conduct discharge. A charge of taking illegal prescription drugs &#8212; when a soldier is not deployed &#8212; carries a maximum penalty of five years imprisonment.

He said soldiers could be prescribed such medication if they need it.

&#8220;Those individuals are taken off the line and properly monitored,&#8221; McKitrick said.

Hewitt leaves the military with a general discharge after the command upgraded it while he was in Vicenza. That means he&#8217;ll be able to keep most of the benefits he earned for being a soldier. He also plans to petition soon to upgrade his discharge to honorable.

He said he realizes the dangers of taking prescription medication in such an environment. He said he knows he made a mistake and should have faced some punishment. But he thinks what he got was too severe. And he knows he shouldn&#8217;t have been so trusting.

It turns out, Hewitt said, the other soldier got the Valium from someone outside the wire.