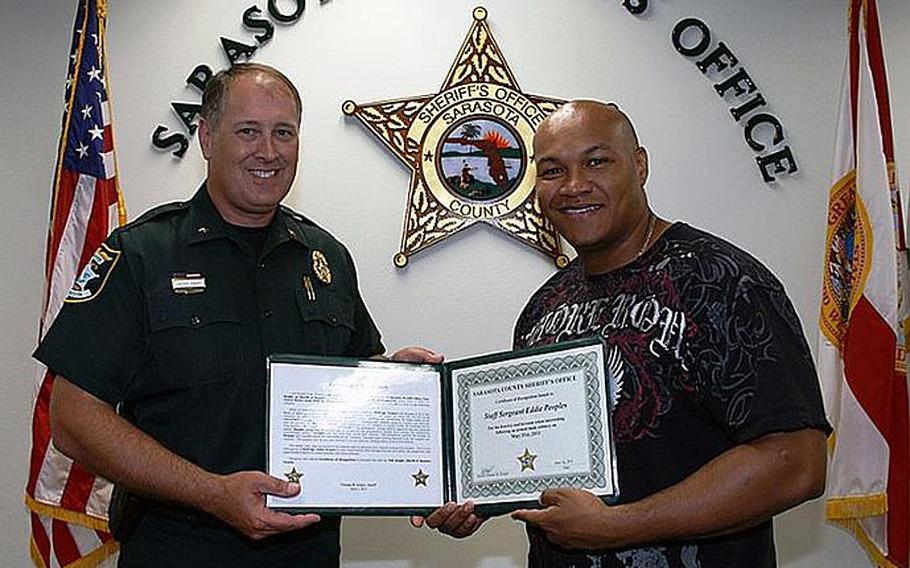 Sheriff Tom Knight,left, presents a Certificate of Recognition to Army Staff Sergeant Eddie Peoples for disarming and subduing the man who robbed a Bank of America, in Sarasota, FL, on Tuesday. Courtesy Sarasota County Sheriff&#39;s Office ()

KAISERSLAUTERN, Germany &mdash; When a soldier sheds his camouflage uniform and takes a vacation, the last thing he wants to set his sights on is the barrel of a gun.

This Tuesday, less than 24 hours after touching U.S. soil again, Staff Sgt. Eddie Peoples stepped into a bank in Sarasota, Fla. In tow were two of his four sons, ages 4 and 6.

&ldquo;I had to do a quick transaction,&rdquo; Peoples, a member of the 386th Movement Control Team in Vicenza, Italy, said in a telephone interview.

Another man walked into the bank, looking for a snappy deal himself. The man, Matthew Rogers suddenly brandished a gun and ordered everyone to hit the ground.

&ldquo;I just remember focusing on the weapon,&rdquo; the 34-year-old soldier said. &ldquo;The bank turned into a mannequin shop. There was dead silence.&rdquo;

Peoples, an Iraq war veteran, tells his boys whenever he deploys he has to leave to &ldquo;go fight the bad guys.&rdquo; On this day, a family day, his guard was up and so he managed in short order to score another one for the good guys.

Peoples displayed his own brand of coolness.

As the robber left and walked toward his get-away car, Peoples followed, leaving his kids in the bank. Peoples&rsquo; van was closer to the entrance and he reached his vehicle first. He said he hurriedly drove at Rogers&rsquo; car and blocked its escape.

After a brief confrontation in which the bank robber trained his weapon on him, Peoples disarmed and subdued Rogers, and grabbed the bank bag. It took police a few minutes to sort out who was who before they arrested Rogers.

&ldquo;All of my deployments, except for the last one, have been hairy,&rdquo; Peoples said. &ldquo;I honestly didn&rsquo;t look at it as a big thing. I really don&rsquo;t consider myself a hero.&rdquo;

The gun was later determined to be a Daisy Powerline BB pistol, said Det. Mark Lefebvre, lead investigator on the case for the Sarasota County Sheriff&rsquo;s Office.

Lefebvre has been in law enforcement for 10 years and said he has never seen a bystander act so well under such adverse circumstances. Peoples &ldquo;was smart, cool and collected,&rdquo; Lefebvre said in a phone interview. &ldquo;He went to work. He knew this individual needed to be stopped. His military training kicked in.&rdquo;

Lefebvre could not disclose how much money was involved, except to say it was &ldquo;a significant amount&rdquo; but less than $50,000.

&ldquo;I&rsquo;m a father,&rdquo; Lefebvre said. &ldquo;I would think twice before putting myself in harm&rsquo;s way&rdquo; with the children present. &ldquo;I don&rsquo;t think that ever crossed his mind.&rdquo;

Once Rogers was in police custody, Peoples returned to the bank to get his two boys. When he entered the lobby, the bank&rsquo;s occupants erupted in cheers.