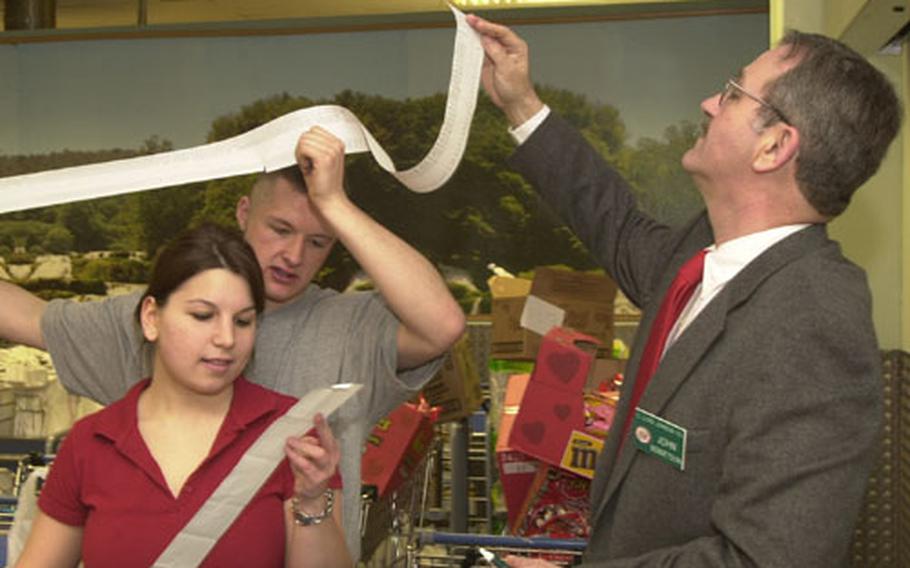 BAUMHOLDER, Germany &#8212; When Spc. Justin Brown gets to the Oreo cookies at Baumholder&#8217;s commissary, he just takes a well-muscled arm and sweeps them into his shopping cart. Some make it in. Some don&#8217;t.

Same in the chips aisle, where Brown leaves behind crumpled casualties littering the floor like corpses on a battlefield.

You can shop like this when someone else is footing the bill.

Last fall, Brown &#8212; a 21-year-old soldier from Mundelein, Ill. &#8212; was named the Army&#8217;s Soldier of the Year. Part of his &#8220;reward&#8221; was a five-minute commissary shopping spree, courtesy of retailers who sell to the Defense Commissary Agency. Only tobacco products were off limits to the 95th Maintenance Battalion soldier.

Being a top troop, Brown approaches the spree as something of a field problem, arriving at the commissary Friday morning an hour early to reconnoiter.

One of his goals was to round up enough prime beef and snacks for a Super Bowl barbecue at a buddie&#8217;s house in nearby Birkenfeld.

Straight down Aisle 9 to the meats, then to the high-dollar items. After that, the nonperishables and finally, the Doritos and cheese dip for the big Super Bowl shindig.

His girlfriend, Rabea Wodniczak, is on hand to help, as is his friend, Staff Sgt. Steven Weber, also from the 95th.

DECA officials are also on hand, because this is a huge deal.

The noncommissioned officer of the year, Sgt. 1st Class Jeffery Stitzel, got a five-minute spree at Fort Belvoir, Va., and racked up $7,272.36 worth of goods. So Brown has a challenge to meet.

At a little past 9 a.m., Brown sprints off, throwing huge cuts of beef into a strategically placed shopping basket. Weber replaces Brown&#8217;s carts as fast as Brown can fill them with wordless, seamless coordination. Wodniczak reminds Brown to double back for forgotten items.

He splurges on some items he wouldn&#8217;t normally buy &#8212; beef and pizzas. But incredibly practical for such a young man, Brown is most pleased with the most mundane items.

DECA officials are stunned. Almost 20 minutes after the scramble, cashiers are at $8,100 and still churning out long strands of register tape, trying to calculate just how much Brown scored.

In five minutes, Brown rounded up groceries that are more than one-third of Baumholder&#8217;s average daily sales total of $26,000.

As he pushes the first of 30 carts &#8212; creaking under the weight &#8212; to the commissary storage area where the food will stay until he&#8217;s ready, Brown takes a moment to dispense tips to the next U.S. Army Solider of the Year.