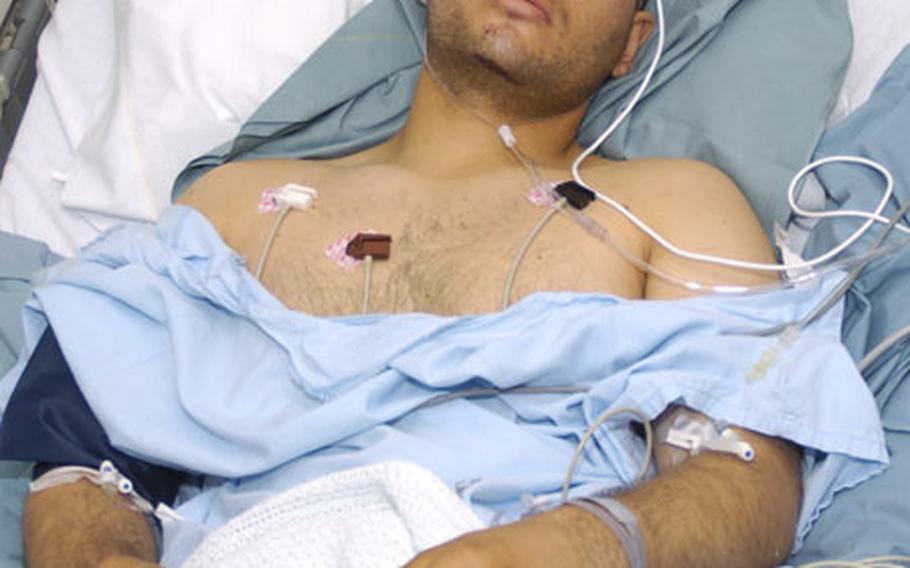 Spc. Joshua Gutierrez discusses the mission he was on late Friday and early Saturday to locate two missing soldiers in Iraq. During the mission, Gutierrez suffered wounds to both his legs when the Bradley he was driving hit a mine or roadside bomb. A portion of Gutierrez’s right leg had to be amputated. The 24-year-old soldier from the 4th Infantry Division was recovering Tuesday at Landstuhl Regional Medical Center, Germany. (Tom Crawford / Courtesy of U.S. Army)

LANDSTUHL, Germany &#8212; Find the missing soldiers and get to them before the worst could happen.

That&#8217;s what was going through the mind of Spc. Joshua Gutierrez late Friday and early Saturday as he was driving a Bradley fighting vehicle during a mission to locate Army Pfc. Kristian Menchaca, 23, of Houston, and Army Pfc. Thomas L. Tucker, 25, of Madras, Ore.

Gutierrez was one of 12 troops wounded in the search for Menchaca and Tucker, who went missing Friday near Youssifiyah, Iraq, in an apparent kidnapping by heavily armed insurgents. The bodies of Menchaca and Tucker were recovered Tuesday near where they were captured, U.S. and Iraqi military officials said.

The 24-year-old Gutierrez, of Mira Loma, Calif., was driving a Bradley early Saturday morning during the search north of Iskandariyah when it hit what he thinks was either a mine or improvised bomb.

Initially, Gutierrez thought he was going to burn to death. He was trying to open the ramp to let soldiers in the back out of the Bradley.

The gunner on the Bradley &#8212; a fellow specialist &#8212; jumped out of his seat, opened the hatch and pulled out Gutierrez.

Gutierrez heard the specialist might get a Bronze Star Medal for saving him.

Gutierrez suffered severe injuries to both his legs. He arrived at Landstuhl Regional Medical Center on Sunday. His left leg is fractured, and a portion of his right leg had to be amputated as a result of the blast.

Gutierrez, who had just learned that the bodies of Menchaca and Tucker had been found, had a message for their families.