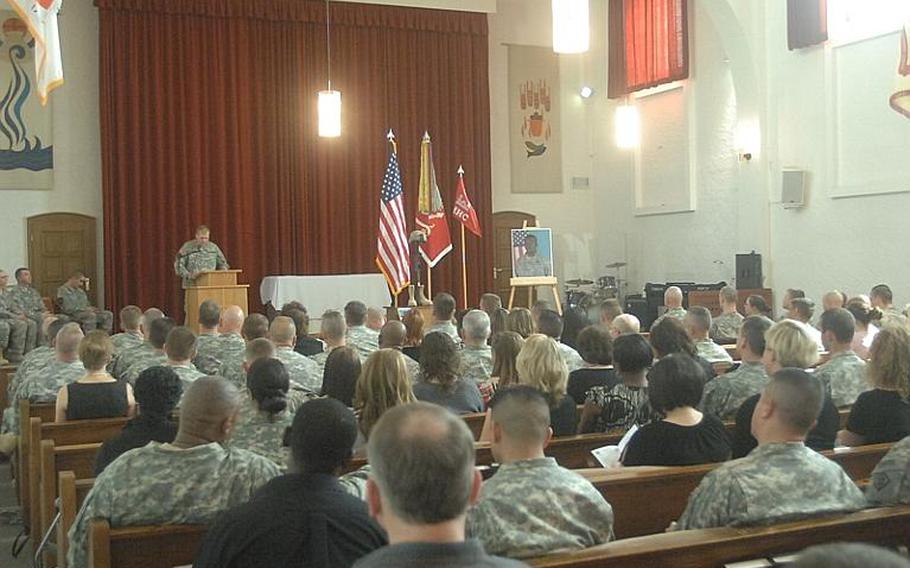 Soldiers pack the pews of the Ledward Barracks chapel in Schweinfurt, Germany, on Tuesday for a memorial service honoring Spc. Bernard Hill Jr. The 28-year-old soldier, of the 15th Engineer Battalion, was killed in a convoy accident in Germany on April 24, 2012. (Steven Beardsley/Stars and Stripes) 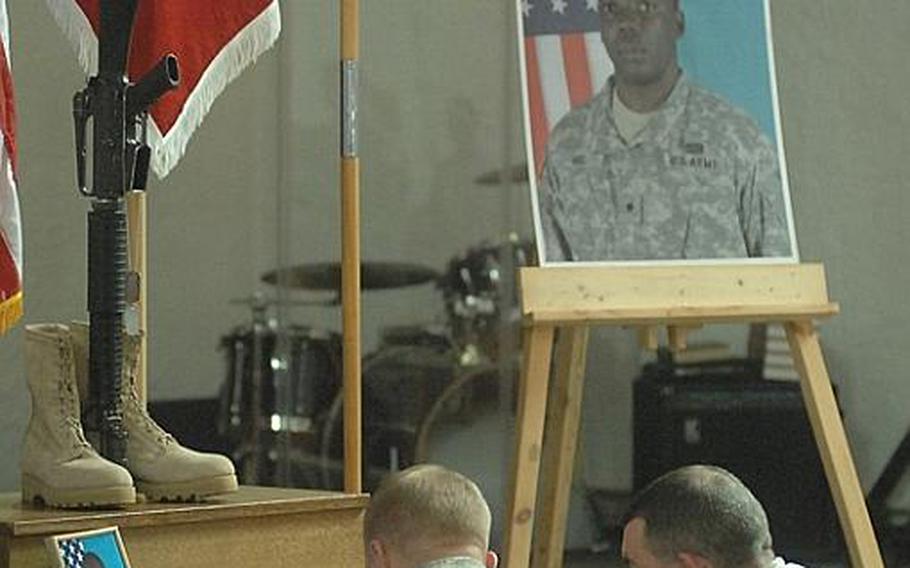 Soldiers pay final respects at a memorial service Tuesday for Spc. Bernard Hill Jr. at the Ledward Barracks chapel in Schweinfurt, Germany. Hill, 28, was a member of the 15th Engineer Battalion. (Steven Beardsley/Stars and Stripes)

SCHWEINFURT, Germany &mdash; He wore a &ldquo;business face&rdquo; at work and a winning smile among friends.

One week after his death in a convoy accident on a German autobahn, Spc. Bernard Hill Jr., of the 15th Engineer Battalion, was remembered by peers as a professional who quietly and eagerly assumed responsibility. Friends recalled a man with an easygoing side and a concern for his buddies.

Hill, 28, of Homestead, Fla., was seated in the rear Humvee of a 14-vehicle company convoy on the A73 autobahn when a large cargo truck slammed into the vehicle from behind. The force of the collision pushed the Humvee forward into two other Humvees, killing Hill and injuring five other soldiers, U.S. Army officials and German police said last week.

The 38-year-old truck driver from Nuremberg received minor injuries, according to information from German police.

Hill worked as a unit supply specialist with Headquarters and Headquarters Company. He leaves a wife, Karen, and one child, 3-year-old Bernard III.

Soldiers from units across Ledward Barracks in Schweinfurt packed the pews of the post chapel for the Tuesday afternoon service, while some stood in the back. Superiors and friends spoke warmly of the soldier.

The specialist handled duties normally assigned to an NCO, Vereen said. Whether arranging battalion transportation or coordinating moves in Kuwait and Germany, Hill wore the same, focused expression, Vereen said &mdash; his &ldquo;business face,&rdquo; as Vereen and Hill termed it.

Hill&rsquo;s company commander, Capt. Rachel Hoffman, called him &ldquo;steadfast,&rdquo; a man capable of keeping a low profile while leaving a large impression on other soldiers.

Spc. Ismael Rodriguez, a battalion chaplain assistant, spoke of another side of Hill, the man he barbecued with and kicked back with. He would rib Hill for his love of the embattled Miami Heat basketball team and shared his work frustrations and successes with him.

&ldquo;He was a great soldier, true battle buddy and friend, but more than all, he was my brother in arms,&rdquo; Rodriguez said.

Hill deployed to Kuwait after joining the 15th Engineer Battalion in September 2010. He participated in Operation Restore Hope, in Haiti, while assigned to the 82nd Airborne Division, according to a battalion biography.