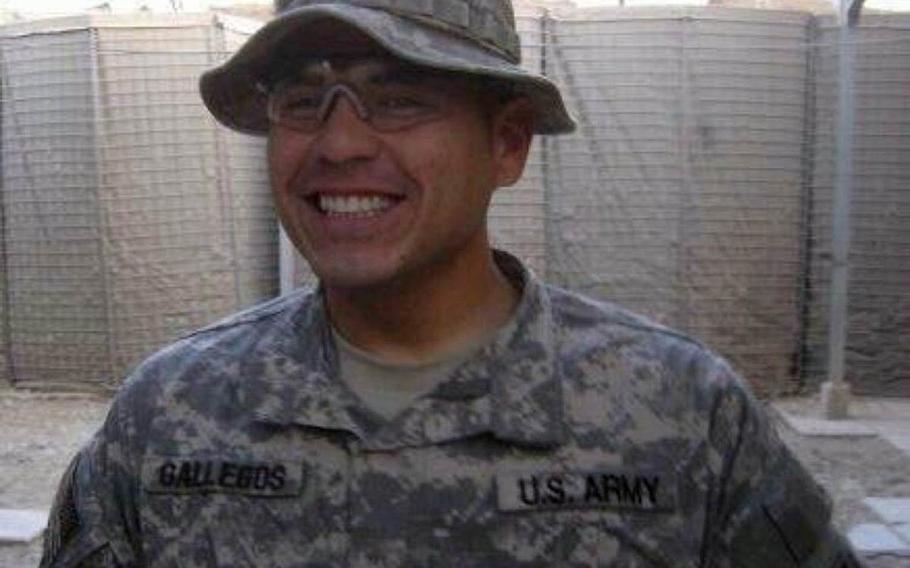 Staff Sgt. Justin Gallegos' posthumous Silver Star will be upgraded to a Distinguished Service Cross, the nation's second highest award for valor, during a ceremony at Joint Base Elmendorf-Richardson, Alaska, Saturday, Dec. 15, 2018. (Courtesy of U.S. Army)

In the early hours of Oct. 3, 2009, more than 300 enemy fighters stormed an isolated U.S. outpost in Afghanistan near the Pakistan border, overwhelming the mere 50 American troops stationed there.

For the next 12 hours, the soldiers stationed at Combat Outpost Keating fought one of the deadliest battles of the long war in Afghanistan.

Eight soldiers died and 27 were wounded in the Battle of Kamdesh, dubbed “a day of heroes” for the acts of valor displayed by those who repelled the attack.

The Army awarded 37 Army Commendation Medals with V device for valor, 18 Bronze Stars with V device and nine Silver Stars to soldiers who fought that day. Two soldiers received Medals of Honor, the nation’s highest award for heroism in combat.

Among the dead was 27-year-old Staff Sgt. Justin Gallegos, who was posthumously awarded the Silver Star.

Now, that medal is being upgraded to the Distinguished Service Cross, the country’s second highest award for valor.

The fallen hero’s teenage son, MacAiden Gallegos, will accept the award during a ceremony Saturday at Joint Base Elmendorf-Richardson in Alaska, the Army said in a statement.

Col. Dave Zinn, the current commander of the brigade in which Gallegos served during the battle, will present the honor. Sen. Lisa Murkowski, R-Alaska, will present a flag that had flown over the Capital in Washington, D.C.

Although Gallegos was an Arizona native and is buried in Tucson, the ceremony is being held in Alaska because MacAiden lives there with his mother and stepfather.

Several of the soldiers who served with Gallegos at Outpost Keating — including Medal of Honor recipients Staff Sgt. Clint Romesha and Staff Sgt. Ty Carter — are slated to attend the ceremony, the Army said.

Gallegos was with B Troop, 3rd Squadron, 61st Cavalry Regiment at Outpost Keating, an installation poised to be abandoned before the attack took place.

Taliban insurgents opened with rifle and machine gun fire, rocket-propelled grenades and mortars from vantage points above the valley outpost.

An RPG round exploded the Humvee’s machine-gun turret, blasting shrapnel into the vehicle and injuring Carter, Larson and Martin, according to the Army battle narrative.

That small group was cut off from the rest of B Troop’s soldiers fighting near the tactical operations center across the base.

With Carter and Martin providing covering fire, Gallegos, Larson and Mace set out for the operations center but were hit by a hail of machine fire from Taliban fighters who had infiltrated the base.

Gallegos was killed instantly. Martin bled to death from a leg wound after crawling under a shelter, and Mace perished from his wounds.

“As a team leader, Staff Sergeant Gallegos maneuvered under heavy sniper and RPG fire to reinforce a Western battle position and called for fire on several enemy positions,” Gallegos’ Silver Star citation reads. He “planned and initiated a course of action that enabled a section of Soldiers to regroup and provide security to endure the remaining hours of battle and counterattack the enemy force.”