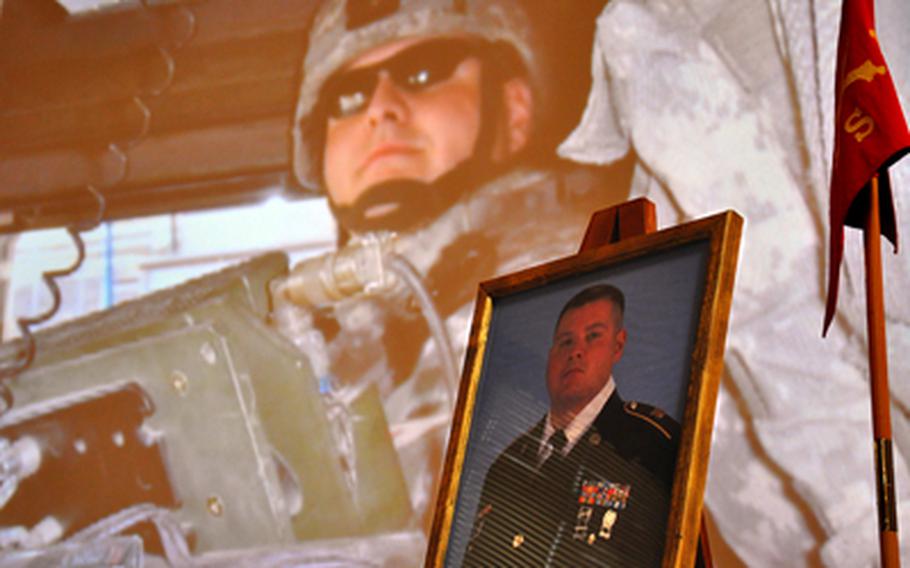 Buy Photo
Staff Sgt. Thomas H. Oakley was remembered during a memorial service at Ledward Barracks in Schweinfurt, Germany, on Thursday. Oakley was struck and killed by a car on April 14 while trying to render aid at a traffic accident. (Dan Blottenberger/Stars and Stripes)

SCHWEINFURT, Germany &#8212; Hundreds of friends and family packed Ledward Barracks chapel in Schweinfurt on Thursday to remember a U.S. soldier who was killed trying to help others.

Staff Sgt. Thomas H. Oakley, 33, of Coventry, R.I., was struck and killed by a car April 14 near Bamberg after he stopped to help some motorists involved in a car accident. To those attending the memorial, it was no surprise that Oakley died trying to help others.

"He left this world the same way he lived in it &#8212; in the service of others," said Capt. Lee Gray, Oakley&#8217;s company commander, during the service. "Staff Sergeant Oakley didn&#8217;t have to stop late at night &#8212; to help others involved in the accident on the autobahn &#8212; he knew that his family was waiting for him at home, but [helping others] was programmed in his DNA."

Oakley served as an ammunition section chief in Service Battery, 1st Battalion, 77th Field Artillery Regiment based out of Schweinfurt.

His good friend, Staff Sgt. Daniel Skywatcher, who deployed to Baghdad with Oakley in 2007, said Oakley placed his family above all else, but he would stop at nothing to help others.

"He was a guy that, if he saw you needed help, would stop and give you a hand, even if it was inconvenient for him," Skywatcher said.

"Sergeant Oakley loved cars," said Skywatcher. "He almost always seemed to have a car for sale, lord knows &#8212; and he at least tried to sell a BMW to most of you and has offered to buy yours as soon as you mentioned that you were selling it."

Oakley, who had served on multiple deployments, had returned from a deployment to Iraq in November with the 172nd Infantry Brigade.

He is survived by his wife, Monika, and his two children, Mina and Thomas Jr.