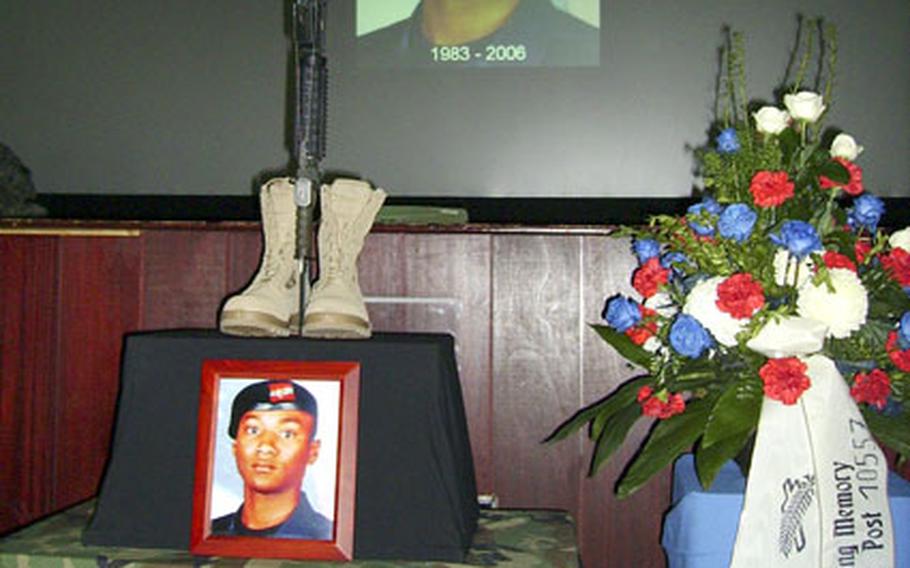 Cpl. Isaiah Calloway, 23, of Jacksonville, Fla., who was killed in action Monday in Afghanistan, is the first combat death for the 1st Battalion, 4th Infantry Regiment since the Vietnam War. Calloway was honored Friday at a ceremony in the Hohenfels, Germany, theater. (Seth Robson / S&S)

HOHENFELS, Germany &#8212; A 1st Battalion, 4th Infantry Division soldier killed in action Monday in Afghanistan was the first combat death suffered by the unit during a year in which groups of its soldiers have been continually downrange in Iraq and Afghanistan, 1-4 commander Lt. Col. Timothy Delass said.

Delass, who spoke Friday at a ceremony in honor of the dead soldier, Cpl. Isaiah Calloway, 23, of Jacksonville, Fla., in the Hohenfels theater, said he was also the first 1-4 soldier to die in battle since the Vietnam War.

Calloway deployed to Afghanistan in June with 1-4&#8217;s Company C, which is working alongside Romanian troops fighting Taliban and al-Qaida insurgents in Zabul province, Delass said.

The soldier died when his combat patrol was ambushed by insurgents armed with rocket-propelled grenades and machine guns, Delass said.

&#8220;As the platoon maneuvered, he returned fire and during the engagement he was struck by enemy fire. Medics tried to revive him &#8230; but he passed away before the medevac could get there,&#8221; he said.

&#8220;The battalion has been deployed for almost more than a year with four separate deployments and this was the first soldier KIA (killed in action) since Vietnam,&#8221; Delass said.

The 1-4&#8217;s role as the Joint Multinational Readiness Center&#8217;s Opposition Force at Hohenfels trains its soldiers well for their overseas missions and is one reason for the low casualty rate, he said.

Other 1-4 troops who spoke at the ceremony remembered Calloway as a quiet soldier and a strong family man. He is survived by his wife, Alecia Denee; daughters, Alexius Michelle, 4; Aleiah Savannah, 3; and son Isaiah Jr., 2.

Staff Sgt. Eric Boyce, who was Calloway&#8217;s squad leader before he went to Afghanistan, said the young father seldom came on social trips with the unit because he preferred to spend time with his family.

He was a keen student of the military and hoped to become a noncommissioned officer, said Boyce, 26, of Colorado Springs, Colo.

Physical training was another of Calloway&#8217;s strengths, Boyce added.

The 1-4 chaplain, Maj. Peter Johnson, said Calloway had plans to go to Fort Stewart, Ga., after his tour in Afghanistan and live with his family in nearby Jacksonville, Fla.

Delass said Company C will return from Afghanistan early next year. Another of 1-4&#8217;s sub-units is training to deploy when the company gets home, he said.