Soldier is the face of new Army marketing program 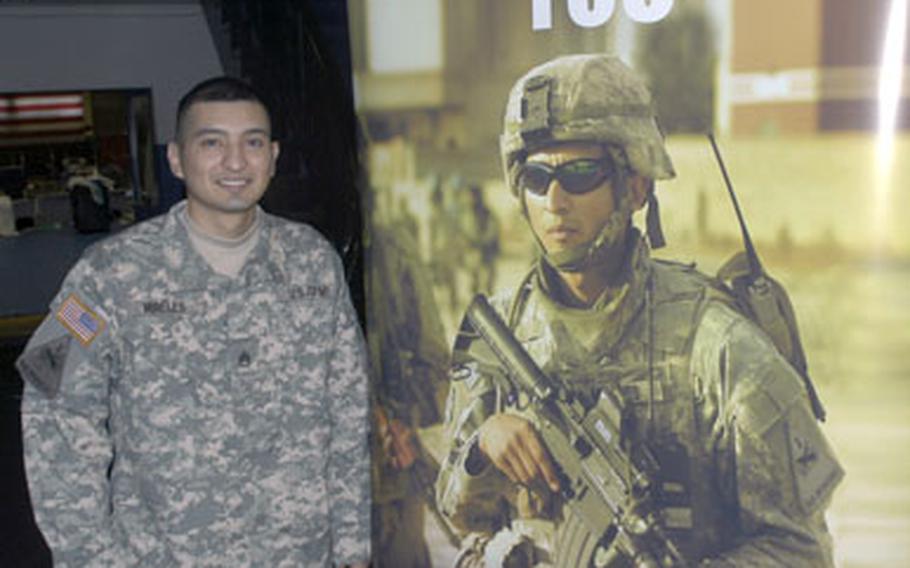 BAUMHOLDER, Germany &#8212; At first glance, Staff Sgt. Francisco Mireles didn&#8217;t see anything unusual about the poster, which encourages people to donate blood as part of a military public awareness campaign.

Just another image of a soldier in shades on patrol, Mireles assumed, after glancing at the picture during a blood drive in Baumholder.

Mireles, a soldier with the 1st Battalion, 6th Infantry Regiment, 2nd Brigade, 1st Armored Division, is the current face of the Army for the Armed Services Blood Program. His picture appears under the heading: &#8220;What else does he need? You.&#8221;

On Thursday, he was presented with a life-size poster of himself during a blood drive in Baumholder attended by leaders of the blood program. Mireles learned about his place in the military marketing campaign by accident while giving blood last summer.

The picture of Mireles was taken while he was on patrol in Iraq with fellow soldiers from Company A, 1st Battalion, 6th Infantry Regiment, during their 2006 deployment. Mireles, who will deploy again with Company A this spring, said he remembers a Marine photographer being on patrol that day with the unit and snapping pictures.

Not only is Mireles on posters here in Europe, but also Armywide, said Maj. Jose Quesada, director of blood services at Landstuhl Regional Medical Center.

Mireles said his father already has a place set aside in Texas for the life-size image of his son.