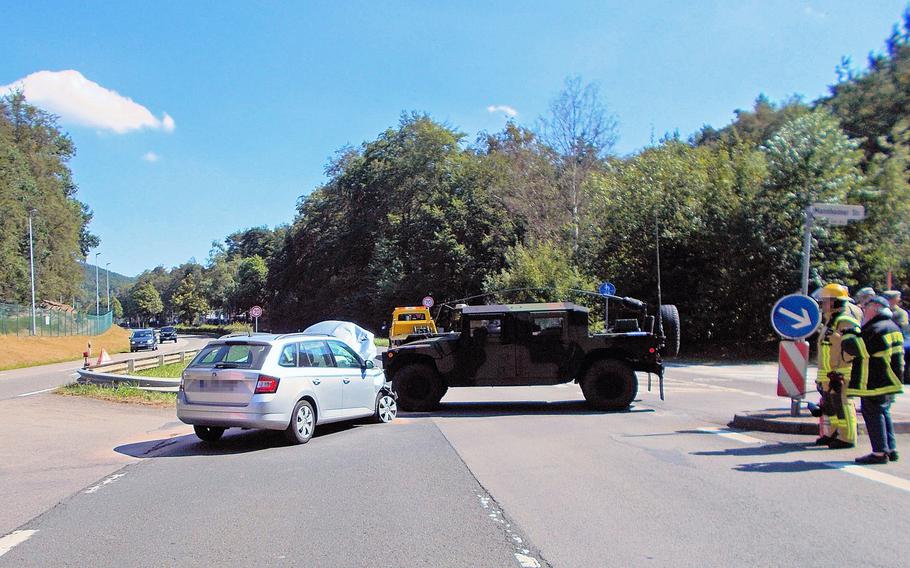 Two people were injured Wednesday, Aug. 31, 2016, when a Humvee driven by a U.S. soldier went through a stop sign while exiting Panzer Kaserne in Kaiserslautern, Germany, and collided with a smaller, private vehicle. The Humvee passenger, also a soldier, was injured, as was the driver of the other vehicle. (Stars and Stripes)

KAISERSLAUTERN, Germany — A U.S. soldier was injured Wednesday when the Humvee he was riding in collided with a smaller, private vehicle on the roadway outside Panzer Kaserne.

The Humvee driver, also a U.S. soldier, went through a stop sign while exiting the base onto Mannheimer Strasse about 12:30 p.m., according to a Kaiserslautern police report.

The Humvee struck a Skoda. Damage to the vehicle, which had to be towed, was estimated at several thousand euros, Kaiserslautern police said. The driver of the Skoda sustained minor injuries.

The soldiers in the Humvee were assigned to the 635th Transportation Detachment, 39th Transportation Battalion, in Kaiserslautern, said a spokesman with the 21st Theater Sustainment Command.

The Army spokesman said the incident was under investigation.

A Kaiserslautern police spokesman would not comment on the extent of the soldier’s injuries, but he is expected to recover.