Soldier hopes to find remains of uncle, other victims of 1952 Alaska crash 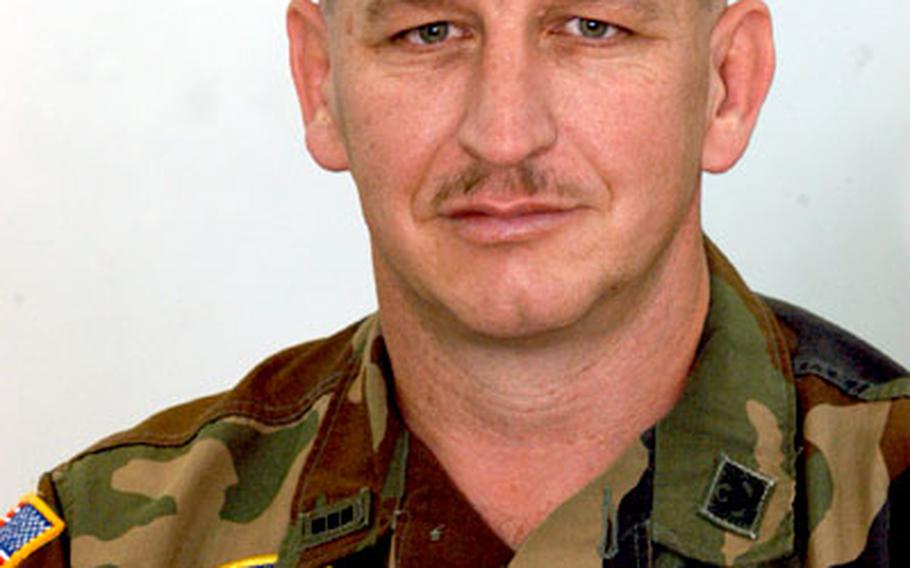 Chief Warrant Officer 3 Leo Blasi, deployed to Eagle Base with Company A, 1st Battalion, 108th Aviation Regiment, has planned an expedition to Alaska to search for the body of his uncle. (Ivana Avramovic / S&S)

EAGLE BASE, Bosnia and Herzegovina &#8212; Leo Blasi has never been to Alaska or gone mountain climbing, but he is planning an expedition to the northernmost state to bring home his uncle and other victims of an airplane crash more than 50 years later.

Family is important to Blasi, a chief warrant officer 3 with Company A, 1st Battalion, 108th Aviation Regiment, a National Guard unit currently stationed at Eagle Base.

So, even though he was born 11 years after the crash of an Air Force aircraft that killed his uncle, Daniel, and 17 other people, he is determined to find the remains.

In 1952, Daniel Blasi, the oldest of 17 children and 19 years old at the time, was aboard a C-119, known as the flying boxcar, on a classified mission in Alaska when bad weather caused the plane to crash into Mount Silverthorne, part of the Denali range.

At the time, the Air Force deemed a recovery operation unfeasible. The classified report on the accident was filed away.

That was until one slow day at Eagle Base when, while surfing on the Internet, Blasi stumbled upon an Air Force archives Web site that said the bulk of reports from 1933 to 1953 had been declassified.

Several e-mails and days later, Blasi tracked down a person who had bought many of the reports, including the one on his uncle, and was willing to share it.

All Blasi had to do was cover the cost of copying the 287-page report.

The same day, Blasi was e-mailed six pictures of the crash.

But then another idea dawned on Blasi: Go to the crash site and recover the body of his uncle and finally bring closure to the family.

Blasi started checking out Web sites on mountain climbing and soon got volunteers to help him in his expedition.

&#8220;I think there&#8217;s enough information that we should be able to locate the crash pretty easily as long as we have the right equipment to do it,&#8221; Blasi said.

He expects his endeavor will take between four and 10 weeks when he sets out next April. His unit is scheduled to leave Bosnia this month, but will not start the expedition until the Alaska climbing season starts in April.

Blasi primarily wants to recover the remains of the crash victims, but, if it is possible, he will also recover the aircraft.

Blasi&#8217;s cousin, Jennifer Lad, remembers their uncle playing with her after work.

Her excitement grew when she found out her cousin would pursue the expedition.

Blasi is in a hurry to recover his long-deceased uncle. His two eldest uncles have passed away, and recently the youngest aunt, too. Other aunts and uncles, most of them living in the Wichita and Pratt, Kan., areas are aging.

Blasi is hoping that family members of other victims will also learn of the new developments and contact him so he can relay to them what he finds out.

Names of Air Force C-119 crash victims in 1952, according to Leo Blasi, nephew of one of the dead: