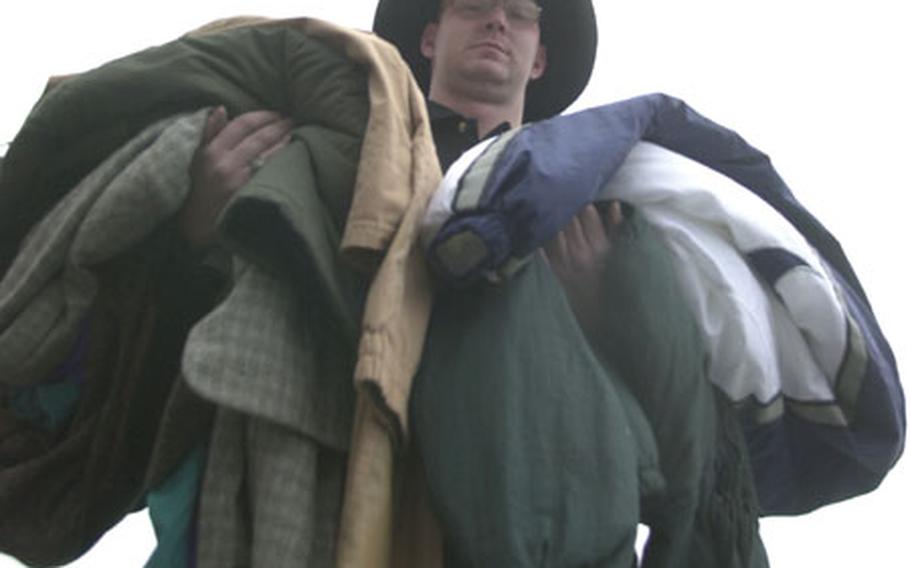 Spc. Mark Stottsberry remembers what it was like to arrive as an injured soldier at Landstuhl Regional Medical Center from the Middle East with little more than the clothes on his back. Now he&#39;s trying to help wounded soldiers come in from the cold. (Jon R. Anderson / S&S)

MANNHEIM, Germany &#8212; Spc. Mark Stottsberry remembers the simple bliss of finally getting out of his dusty boots and desert uniform and slipping into a pair of sweats and sneakers the day he was medically evacuated to Germany from Kuwait in May.

&#8220;Someone just handed us a bag of clothes that people had donated and it was like the greatest gift in the world,&#8221; said Stottsberry, who left the combat zone with little more than the clothes on his back after hurting his shoulder in a fork lift accident.

Fast-forward seven months. Stottsberry is out of the hospital, but still recovering from his injuries.

A truck driver with the 70th Transportation Company in Mannheim, Stottsberry says he can&#8217;t help but think about the injured GIs still flowing into Landstuhl Regional Medical Center.

That&#8217;s why he helped organize a drive to collect coats and other clothes for the newly arrived wounded at Landstuhl.

As the newly elected president of the Mannheim chapter of Better Opportunities for Single Soldiers, he has just the platform to do it.

He and the outgoing BOSS president, Spc. James Wilson, organized Operation Warm Up in Mannheim a few weeks ago to kick off the clothing drive, enlisting local AFN DJs to mobilize community attention.

&#8220;Those are two soldiers who are putting their heart and soul into doing something that really matters,&#8221; said Command Sgt. Maj. Steven Voller, the Mannheim-area 293rd Base Support Battalion command sergeant major.

&#8220;Based on what doctors tell me, there are wounded soldiers showing up with basically nothing, some with just surgical gowns. There&#8217;s a real need there for this.&#8221;

That&#8217;s why with Germany&#8217;s winter weather now in full force, Stottsberry has emphasized donations for coats &#8212; &#8220;if nothing else so they can then go out and buy their own clothes&#8221; &#8212; but says the drive is accepting donations for nearly any clothes that would be of use to newly arriving troops.

A donation box has been set up at the Mannheim USO office at Benjamin Franklin Village. &#8220;Anything that is new or mostly new is preferred,&#8221; he said.

Hopefully, he said, the donations will pick up even more.