Soldier gets 6 months for false testimony in AFN killing 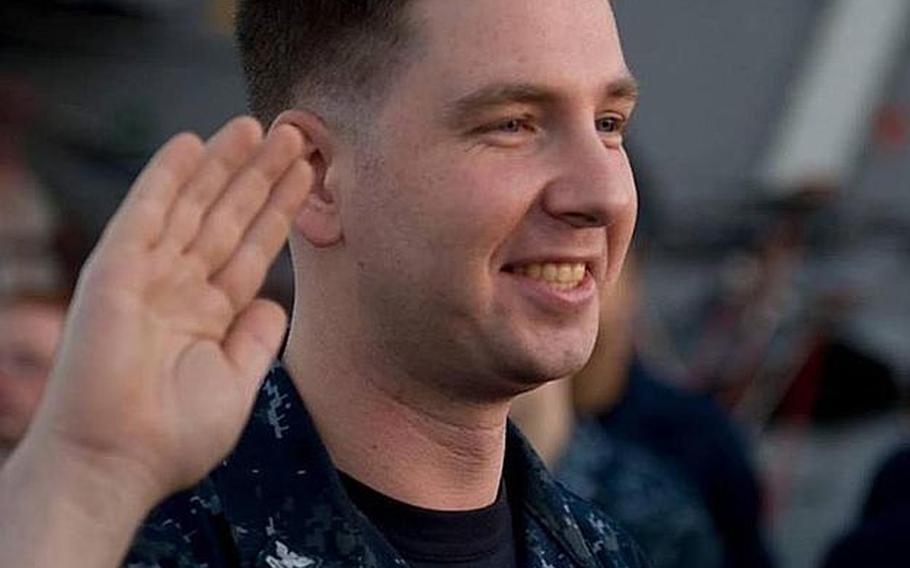 KAISERSLAUTERN, Germany — Spc. Cody Kramer pleaded guilty Thursday to lying to investigators as part of a pretrial agreement that requires him to testify against a colleague charged with murder in the death of an American Forces Network broadcaster.

A military judge sentenced Kramer to nine months of confinement, a reduction to private and forfeiture of $1,000 a month for nine months. Because of the pretrial agreement, Kramer’s sentence will be reduced to six months, with credit for 106 days he spent confined to Sembach Kaserne.

Few details about the mid-December 2013 slaying of Petty Officer 2nd Class Dmitry Chepusov emerged in Thursday’s proceeding, and no witnesses were called to testify until the sentencing portion of the proceeding. Kramer waived the right to a military jury and instead faced only a judge, who accepted his guilty plea after more than an hour of questioning.

Kramer told the judge that Air Force Staff Sgt. Sean Oliver, who will go on trial in January, “is the man who committed the murder.”

Oliver was pulled over for driving erratically Dec. 14, 2013, and German police discovered Chepusov dead in the passenger seat of his car.

Kramer also testified that Oliver had tried to solicit him to kill another servicemember who was present during the killing after Oliver told Kramer he had killed Chepusov.

“I started to panic,” Kramer said. “I started to hyperventilate.” He said Oliver showed him Chepusov’s body, and he touched the sailor’s head to see if he was alive. Kramer said he didn’t try to revive Chepusov when he realized he was dead.

Kramer told the judge that Oliver asked him to help move the body, but he refused, telling Oliver, “I can’t have anything to do with this.”

Investigators questioned Kramer about the slaying on Dec. 19, then again on Dec. 27 on suspicion that he’d earlier lied to police. During the second meeting, he told an Army special agent that he’d slept through the altercation between Oliver and Chepusov. As part of his plea agreement, he admitted that was a lie.

“I was awake the entire time,” he told the judge Thursday.

The night of the slaying, Kramer was one of five servicemembers hanging out at the apartment of Air Force Staff Sgt. Thomas Skinkle after drinking in downtown Kaiserslautern. All five of the men worked for AFN at Ramstein Air Base.

On the way to Skinkle’s, Kramer said, he and Chepusov got into an argument over an incident at an office Thanksgiving party a few weeks earlier. The argument picked up later inside the apartment’s kitchen.

That argument ended when Kramer left the kitchen and went to the living room, he said. Later, Oliver began arguing with Chepusov in the kitchen.

Kramer said he’d lied to agents about whether he’d seen any part of the altercation between Oliver and Chepusov out of fear of getting dragged into the investigation. Kramer was 5 years old when his 3-year-old sister was abducted and killed, and he said the situation reminded him of that and that he had a history of trying to hide from trouble.

Under oath, he told the judge, “I had seen Staff Sgt. Oliver on top of Chepusov’s body.”

Before the slaying, Kramer had put Skinkle to bed in his room, leaving only himself and Air Force Staff Sgt. Shao-Lung Ping in the living room, which was separated from the kitchen by a door. Ping left after the killing, and Kramer said Oliver asked him to kill Ping.

Asked why Oliver made such a solicitation, Kramer told the judge he believed Oliver was concerned that Ping might have seen something.

During sentencing arguments, Capt. Daniel O’Connor, one of two lawyers for the prosecution, asked the judge to sentence Kramer to a dishonorable discharge and at least three years of confinement. The sentence, he said, is about “honoring the dead.”

Capt. Samuel Landes, one of Kramer’s defense attorneys, said the false official statement to which Kramer pleaded guilty to making wasn’t as serious as the prosecution was making it out to be and that it didn’t have any impact on the case.

By the time Kramer made the statement, Oliver had already been confined and had confessed to the killing, Landes said.

“He’s not guilty of obstructing justice” or an accessory to murder. And, Landes said, Kramer is the only witness who can testify to the fact that Chepusov was already dead when Oliver put him in the passenger seat of the car.

Kramer will have to testify against his former friend and colleague to fulfill his end of the pretrial agreement.

Chepusov’s family was critical of the outcome of the proceedings against Kramer, alleging that the Army rushed to broker a pretrial agreement without crucial DNA evidence in hand.

“Dmitry’s family views Kramer as a criminal and as an accomplice to this murder,” Dennis Bushmitch, one of Chepusov’s brothers, said in a statement. “He had numerous chances to prevent our brother and son from being assaulted and then ruthlessly murdered.”