Soldier gets 3½ years in taxi assault 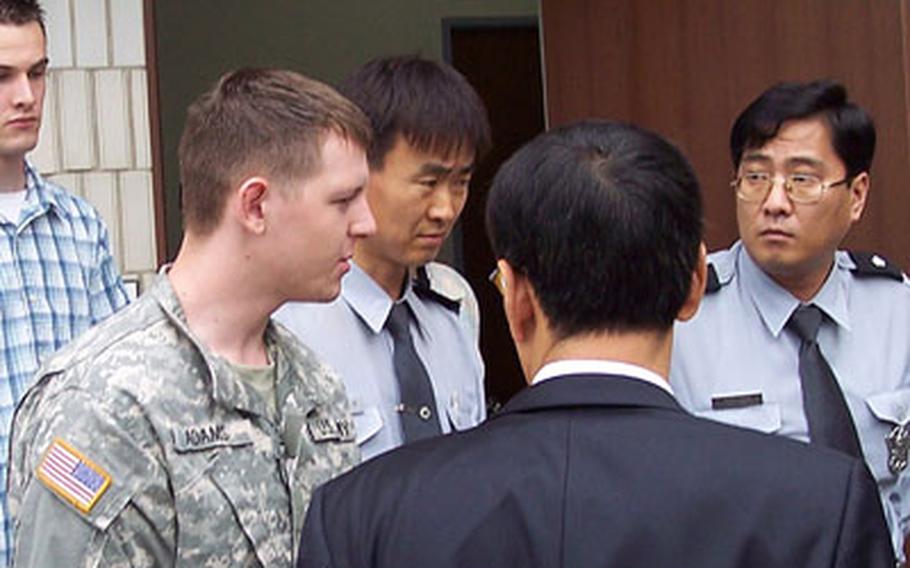 This June photo shows Pvt. Michael Curtis Adams, of the 55th Military Police Company, being led back to jail. Curtis received 3½ years in prison after being convicted of assaulting a taxi driver and stealing his cab. (Erik Slavin / S&S)

UIJEONGBU, South Korea &#8212; An Army private was sentenced to 3&#189; years in prison Friday after being convicted of assaulting a taxi driver and stealing his cab.

Pvt. Michael Curtis Adams, 21, of the 55th Military Police Company, showed no reaction to the verdict.

Once again, Adams showed up in court with a long Mohawk haircut as well as a goatee. He did not wear his uniform, opting for his Seoul Detention Center beige uniform, sleeves rolled up.

During the brief sentencing, Chief Judge Cho Yoon-sin rejected Adams&#8217; repeated claims that while he did punch 66-year-old Yoon Boon-ha, he did not strike him with a 12-ounce vodka bottle.

Yoon testified that he was struck in the eye with the bottle, and an eyewitness corroborated the claim. Prosecutor Park Ji-yong pointed to a photo showing Yoon&#8217;s injuries and said they were consistent with a bottle strike.

Cho said he took into account Adams&#8217; age, job and lack of a criminal record in South Korea before passing sentence. Adams could have been sentenced to up to seven years in prison.

Adams&#8217; case was hampered by an inability to financially settle with the victim, which in South Korean court typically lightens the sentence.

Adams was willing to pay the equivalent of $5,500, but the driver asked for $54,000, far higher than usual in similar cases. Earlier this month, the driver lowered his request to $22,000, Adams&#8217; defense attorney told Stars and Stripes.

On March 26, Adams hailed Yoon&#8217;s taxi at Samgakji Station, near Yongsan Garrison in Seoul. Adams asked Yoon to take him to Camp Red Cloud. Shortly before they arrived, Adams realized he didn&#8217;t have enough money to pay the fare, according to testimony.

He asked Yoon to stop a few blocks away and then beat Yoon before driving off with the taxi. He abandoned the vehicle shortly after and turned himself in to Army authorities the next day.

Adams said he had been drinking but was not heavily intoxicated.

Adams has seven days to appeal his sentence to the Seoul High Court.