Soldier gets 13 months in drug case 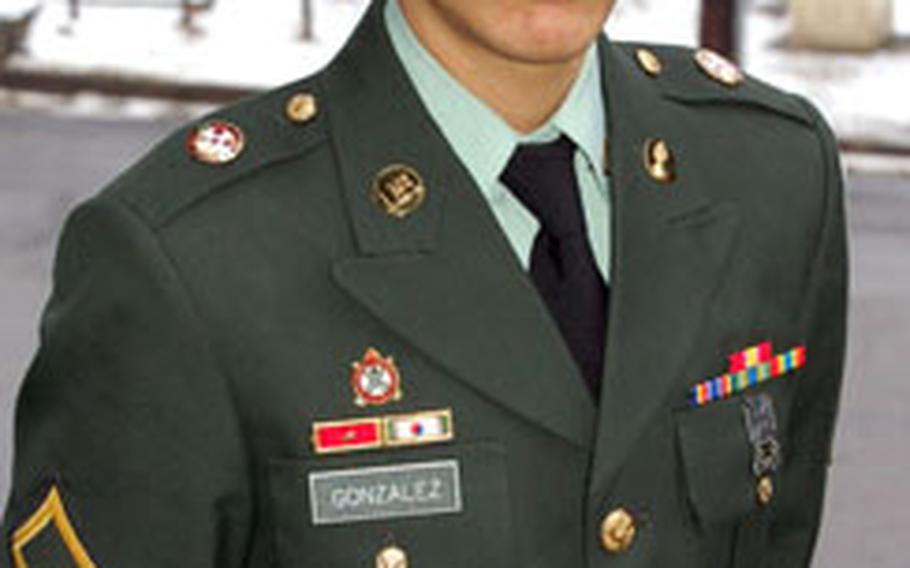 Pfc. Elisa Gonzalez stands outside the Yongsan Garrison courtroom Tuesday during a recess in his court appearance on drug charges. (Jimmy Norris / S&S)

YONGSAN GARRISON, South Korea &#8212; He said he started distributing drugs to make friends. But to win a lighter sentence for his crimes, he&#8217;s willing to testify against those &#8220;friends.&#8221;

Pfc. Elisa Gonzalez, a mechanic assigned to the 18th Medical Command, was sentenced to 13 months in prison, a bad-conduct discharge, forfeiture of pay and allowances and a demotion to E-1 after pleading guilty to drug-related charges Tuesday at Yongsan Garrison.

Gonzalez was charged with selling and giving away about 55 grams of marijuana between April and July 2007. He also was charged with possession and use of the drug and attempting to distribute it to two military policemen.

According to prosecutor Capt. Richard Gorini, Gonzalez was caught in a July 12 sting in which he tried to sell investigators 2.8 grams of marijuana. Investigators found another 1.3 grams in his pocket.

As part of a pretrial agreement with prosecutors to limit his sentence, Gonzalez pleaded guilty and agreed to testify against others in what attorneys described as a marijuana ring at Camp Humphreys.

He told military judge Lt. Col. John Head that one of the MPs had threatened to make him &#8220;disappear in Korea&#8221; if he did not sell the MP marijuana. Immediately following that statement, the judge called a 30-minute recess to allow Gonzalez to talk with his attorney. When the trial resumed, he recanted the statement and said he was thinking of a different incident.

During a later recess, he said he had feared the testimony would cost him his plea deal. If the judge had rejected his guilty plea, the pretrial agreement would have been void.

During questioning by the judge, Gonzalez said he&#8217;d become depressed and began drinking after his grandmother&#8217;s death in April.

Since he was only 19 years old, his roommate expressed concern at his underage drinking and suggested smoking a &#8220;blunt&#8221; instead.

Eventually, Gonzalez said, he began distributing marijuana by sharing and selling it three to four times a week.

He said the sale to Army investigators was to have been his last time distributing, and that he wanted to get rid of his remaining marijuana.

&#8220;I changed [my mind] because I realized the military has better things to offer me than selling drugs,&#8221; he said.

Defense attorney Michael Waddington described Gonzalez as an easily led soldier who had been assigned the &#8220;biggest drug dealer at Camp Humphreys&#8221; for a roommate. He said Gonzalez&#8217;s agreement to testify had helped &#8220;unravel the bulk of the marijuana ring&#8221; at the camp.

He also said Gonzalez had been &#8220;Tasered&#8221; and assaulted by people trying to scare him out of testifying.

Gonzalez&#8217;s court-martial was the first of several expected for soldiers allegedly involved in the marijuana ring, officials said.