Soldiers from the 173rd Airborne Brigade were involved in a brawl in Grafenwoehr, Germany, on Saturday, Feb. 8, 2020. Soldiers from the same unit have been accused of involvement in numerous brawls in Italy. (Immanuel Johnson/Stars & Stripes)

Soldiers from the 173rd Airborne Brigade were involved in a brawl in Grafenwoehr, Germany, on Saturday, Feb. 8, 2020. Soldiers from the same unit have been accused of involvement in numerous brawls in Italy. (Immanuel Johnson/Stars & Stripes) 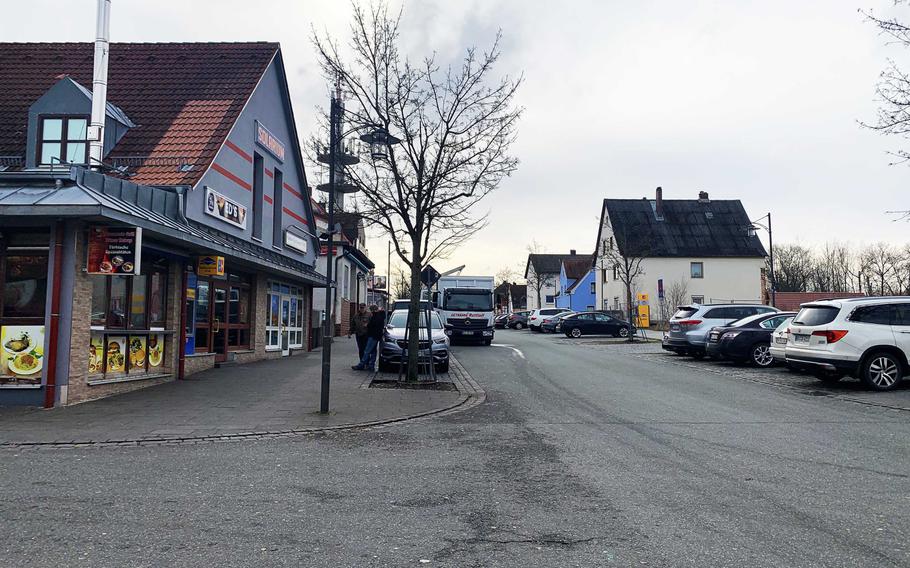 A soldier from the 173rd Airborne Brigade was injured in a street brawl involving several other American soldiers in Grafenwoehr, Germany, seen Saturday, Feb. 8, 2020. The 173rd is forward-based in Grafenwoehr and Vicenza, Italy, where its soldiers have been accused of involvement in numerous brawls. (Immanuel Johnson/Stars & Stripes)

“At this time, we are investigating a 21-year-old man” who is suspected of injuring the soldier in the brawl, said Werner Stopfer, chief of police in the town of Eschenbach, whose officers responded to calls about the melee about 2 a.m. on Alte Amberger Strasse in Grafenwoehr.

The injured soldier was from the 173rd Airborne Brigade, said Maj. Christopher Bradley, a spokesman for the brigade, which has units in Grafenwoehr and in Vicenza, Italy. He was treated for his injuries and returned to duty, Bradley added.

The other person involved also is an American soldier, said Bradley, but it was unclear which unit he was attached to.

German police detained the suspect and handed him over to U.S. military police, said Stopfer.

By the time German police officers had arrived on the scene from Eschenbach, about 7 miles away, about two dozen people were involved in a street brawl, said Stopfer. It was unclear whether all of those involved in the fight are American service members.

Soldiers from the 173rd have been accused of being involved in numerous violent incidents in Vicenza, including a fight in which one Italian man’s jaw was fractured and another person sustained broken ribs.

The incident in the Italian city’s old town in November spurred the 173rd Airborne Brigade’s commander to put Contra Pescherie Vecchie — which, like Alte Amberger Strasse in Grafenwoehr, is home to several popular bars — off limits to brigade soldiers for 45 days.

Patrols by military police will be stepped up this weekend in the Grafenwoehr area “to ensure proper discipline and provide support to any soldiers in need,” said Bradley.