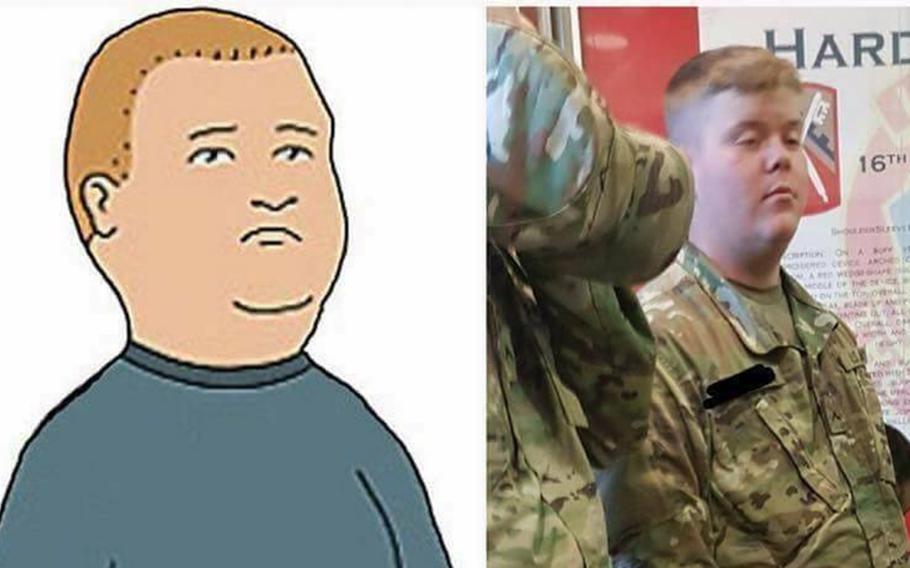 Pvt. 1st Class Andrew Hartmann was the victim of pranksters who made a meme of him in 2017. The meme, comparing his likeness to that of Bobby Hill from the show "King of the Hill," continues to be shared today. (Courtesy Photo)

Pvt. 1st Class Andrew Hartmann was the victim of pranksters who made a meme of him in 2017. The meme, comparing his likeness to that of Bobby Hill from the show "King of the Hill," continues to be shared today. (Courtesy Photo) 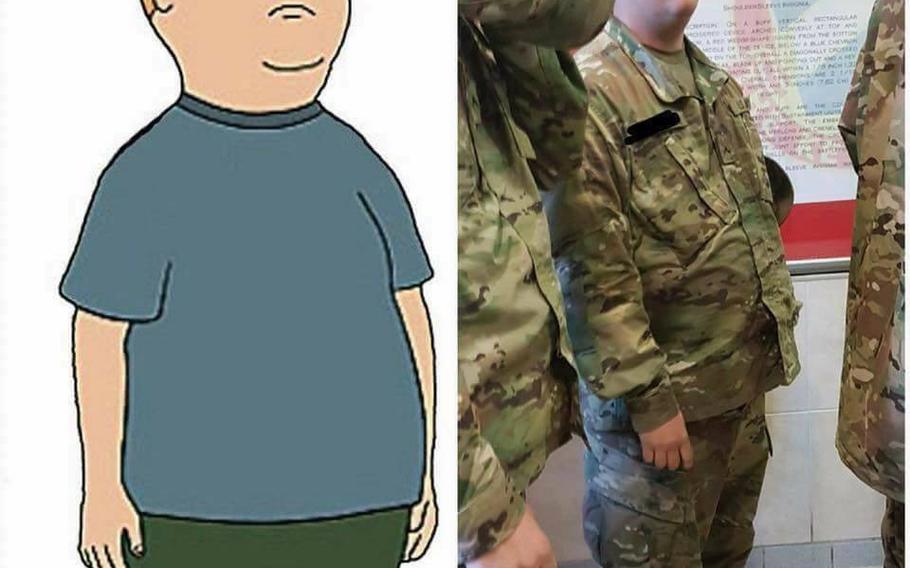 Pvt. 1st Class Andrew Hartmann was featured in a "King of the Hill" meme in 2017. (Courtesy Photo)

KAISERSLAUTERN, Germany — Imagine that one day, out of nowhere, you discover that you are famous.

You are now the butt of a joke on the internet and you’ve gone viral. And people who’ve never met you now either love or hate you.

Pfc. Andrew Hartmann, a soldier with the 66th Transportation Company in Kaiserslautern, Germany, had that happen to him.

“I was on a mission in Poland,” Hartmann said. “When I came back, one of my buddies had tagged me in a post on Facebook saying that someone had turned me into a meme.”

Hartmann’s likeness had been compared to Bobby Hill, a child character from the popular television show “King of the Hill.”

Hartmann’s initial reaction to the meme was calm and relaxed. He thought to himself, “OK, I can’t change it and it’s kind of funny.”

After a while, as the meme continued to gain momentum across the internet, reactions took a nasty turn.

“It was funny at first,” Hartmann said. “But then people just started to demean me. It started to really become a problem when complete strangers started calling me a disgrace to the military, telling me that I wasn’t worth the military’s time ... It got to the point where people started telling me to kill myself.”

His chain of command and co-workers noticed that he was no longer himself and that the negative response to the meme was taking a toll on him.

“He had a sort of darker demeanor,” said Sgt. 1st Class Mario Coursey, platoon sergeant for 1st Platoon, 66th Transportation Company. “You could tell something was wrong and that he had a lot on his mind.”

Coursey, who is a certified master resiliency trainer, or MRT, kept an eye on him. The MRT program is designed to help soldiers be more resilient on and off the battlefield.

“Everyone made sure that if Hartmann wanted or needed help, he would get it,” Coursey said.

But in the end, that wasn’t necessary, he said.

“Being an MRT, we learn ... how to conquer those issues,” Coursey said. “You could see that he was using his training. You could see him benefit from it. He became very outgoing, he became more engaged, and he knocks out his tasks and asks questions to do so.”

Hartmann began to use the negativity to motivate himself to work harder, personally and professionally.

“I couldn’t let it interfere with me doing my job,” he said. “I could either let it get me down and depressed, or become an alcoholic or get out of the military, but I just couldn’t let it do that to me. I am a better person than that.”

At the same time he found a reserve of strength within himself, he got help from some unexpected defenders on the internet.

“I also had friends, family and other servicemembers come to help me out and stand up for me to those internet trolls,” he said. “They told people about me as a person, my character and that I am the type of person to give the shirt off my back if someone needed it.”

The reaction gave him the sense he was part of something bigger. Hartmann says he will now push himself to be a leader.

“I am going to use what I’ve learned to help those and teach others to be resilient,” he said. “That is just one thing that I can do to support my soldiers when I get them.”