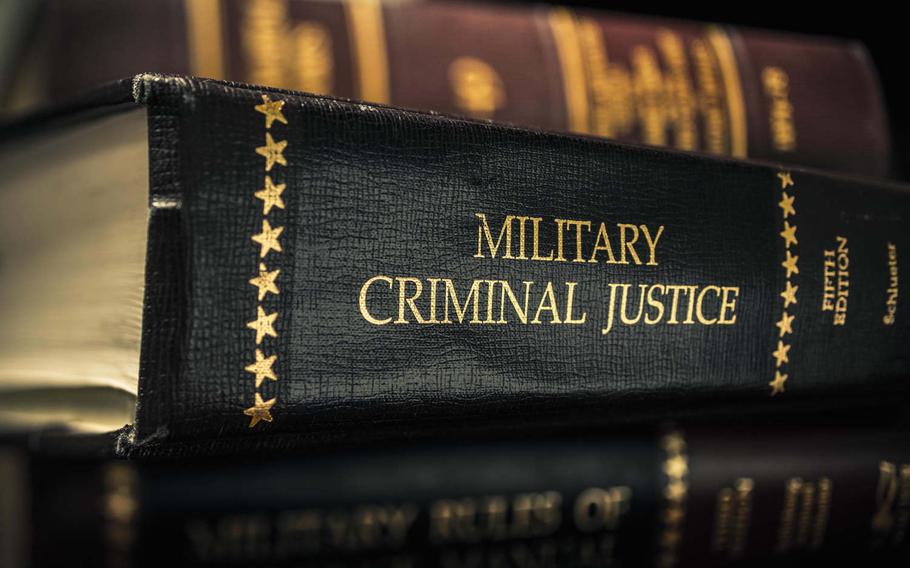 Staff Sergeant Brian P. Johnston, with the 12th Combat Aviation Brigade, was found not guilty this week in Germany on charges that he murdered his infant son in 2015. Samuel Morse/Courtesy of the U.S. Air Force ()

A staff sergeant with the 12th Combat Aviation Brigade faces trial this week in Germany on charges that he murdered his infant son in 2015.

Staff Sergeant Brian P. Johnston, 37, is accused of causing head trauma and the death of his 2-month-old son, Lukas, by shaking or slamming him down.

&#8220;Brian P. Johnston knew that death or great bodily harm was a probable consequence of his act,&#8221; according to court records.

Johnston&#8217;s civilian lawyer said the baby was likely fatally injured in an accident.

On the night of his death, the child was being cared for by Johnston while his wife slept, Meyer said. Johnston put Lukas down on an ottoman while he used the bathroom. &#8220;Lukas rolled off the ottoman,&#8221; Meyer said.

The court-martial at U.S. Army Garrison Ansbach is expected to be lengthy and medically complex.

Prosecution experts will testify about shaken baby syndrome, now often called abusive head trauma, and its markers: brain swelling, bleeding on the surface of the brain and bleeding behind the eyes. In some cases, broken ribs or injuries are also discovered.

For years, those symptoms have been generally accepted as evidence that a crime has been committed by a caregiver, often male, usually frustrated and angered by the inconsolable crying that infants go through.

While the majority of doctors still agree with the diagnosis, some, especially pathologists, have become skeptical.

An investigation in 2015 by The Washington Post and Northwestern University&#8217;s Medill Justice Project found some 200 shaken baby cases since 2001 in which charges were dropped, defendants were acquitted or guilty verdicts were overturned on appeal. In one Tennessee case, a doctor decided that a 10-week-old diagnosed with shaking appeared instead to have suffered strokes before being born.

&#8220;Doctors, myself included, have accepted as true an unproven theory about a potential cause of brain injury in children,&#8221; George Nichols, a retired Kentucky chief medical examiner, told the Post. &#8220;My greatest worry is that I have deprived someone of justice because I have been overtly biased or just mistaken.&#8221;

Shaken baby syndrome is a leading cause of child abuse death in the United States, with at least a quarter dying and nearly all of them left with lifelong disabilities. The National Center on Shaken Baby Syndrome said an estimated 1,300 incidents occur every year.

Infants are far more likely than older children to die from abuse. Of the 18 child abuse-related fatalities the military reported in 2016, half involved babies a year old or less.

The majority of experts say that the combination of injuries present in abusive head trauma can&#8217;t be explained by a natural illness or condition.

If they could, such afflicted babies would sometimes show the effects &#8212; collapse, seizure, loss of consciousness, death &#8212; in public.

&#8220;But interestingly, we see these injuries are most common when the baby is isolated with a single caregiver,&#8221; Carole Jenny, a child abuse physician at the Seattle Children&#8217;s Protection Program and Harborview Medical Center, said in a 2015 hospital publication.

&#8220;And these injuries are much more common when a male caregiver is present, which is also a red flag because we know women are more commonly the primary caregiver,&#8221; said Jenny, who is expected to testify at the court-martial.

Don Christensen, a former Air Force prosecutor, defense attorney and judge, said he was convinced that the science on abusive head trauma was sound.

&#8220;I have seen too many cases where the accused confessed to shaking a baby without any prompting by the investigator,&#8221; Christensen said. The method they describe is exactly how the experts say it happens and the injuries are exactly what we always find.&#8221;