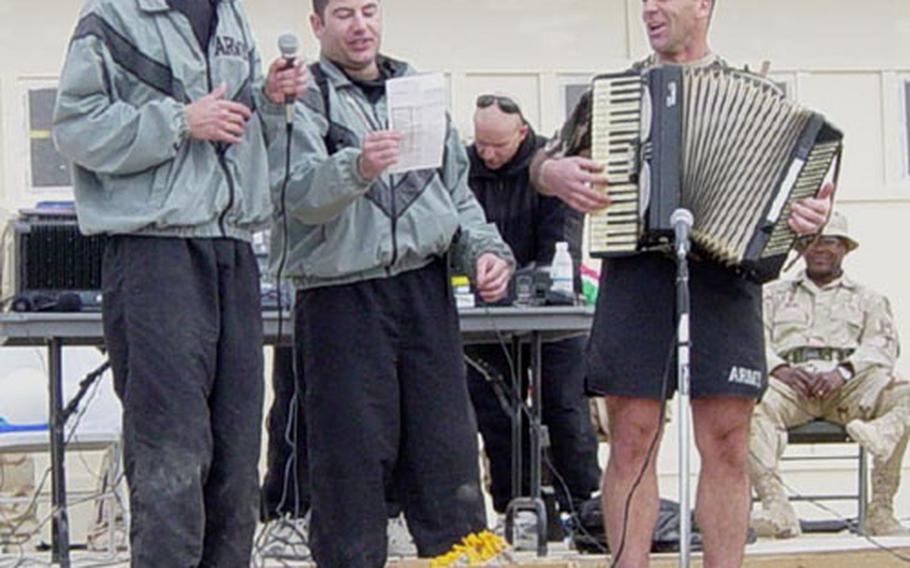 He should know. Giangiulio, a doctor with the 10th Mountain Division&#8217;s Forward Support Battalion hospital, he has been playing his accordion around the base since just before Christmas.

He&#8217;s a fixture at the base coffee bar&#8217;s Sunday-night open mic, talent shows and Christmas pageant. Hospital patients can frequently hear him playing in one of the small offices that borders the waiting area.

He&#8217;s also been teaching Kandahar-based orthopedic surgeon Dr. (Col.) Richard Gonzalez how to play. Memories from his childhood drew Gonzalez to the lessons.

Gonzalez said the instrument was most likely brought to Puerto Rico from early Spanish settlers.

The accordion has influenced the music of many European countries.

&#8220;The Romanians really love it,&#8221; said Giangiulio. A group of Romanian troops are also based at Kandahar airfield.

Giangiulio, whose family traces its roots to the Abruzzi region of south-central Italy, started learning how to play before high school. Dad, he said, listened to accordion music. Mom bought a used instrument at a garage sale in their Wayne, Pa., hometown, and Giangiulio and his older brother started taking lessons.

When Giangiulio entered high school, the accordion was &#8220;un-cool&#8221; and lessons stopped until college.

However, during a dinner at home attended by his college wrestling team, his mother brought out the accordion.

In 2002 Giangiulio was assigned to the pediatrics ward in West Point, N.Y. He deployed to Afghanistan &#8212; without his accordion &#8212; last June.

He volunteered to play organ for Sunday Catholic Mass, but realized he missed his accordion. He talked to some of the unit&#8217;s Afghan translators to see if they could find an accordion in nearby Kandahar.

They couldn&#8217;t, so he wrote his wife, Laura, to see if she could buy a used one and send it to him. She found one, duct-taped together, and put it in the mail. It arrived just before Christmas.

Giangiulio calls the accordion &#8220;the most versatile of any instrument.&#8221;

The accordion&#8217;s versatility comes from its complexity.

Giangiulio&#8217;s right hand plays 41 black and white keys, similar in design and purpose to the 88 keys on a piano. His left hand controls 120 buttons, which are for bass notes and chords to keep the tempo.

There are also three buttons &#8212; called switches &#8212; above the keys, that change the accordion&#8217;s sound to mimic other instruments. His accordion at home has 15 switches.

On top of this, a player must keep air going in and out of the accordion&#8217;s bellows.

Even though there are similarities between the accordion and the piano, Giangiulio says, the accordion&#8217;s definitely tougher.

When Giangiulio returns to West Point later this year, he&#8217;ll continue to pass on his accordion playing skills &#8212; not to his wife, who he says still doesn&#8217;t appreciate the instrument as much as he does, but to his kids.

Their 3-year-old daughter, Francesca, received a toy accordion as a Christmas gift from his parents.