Soldier doesn't let distance stop him from marrying his fiancée 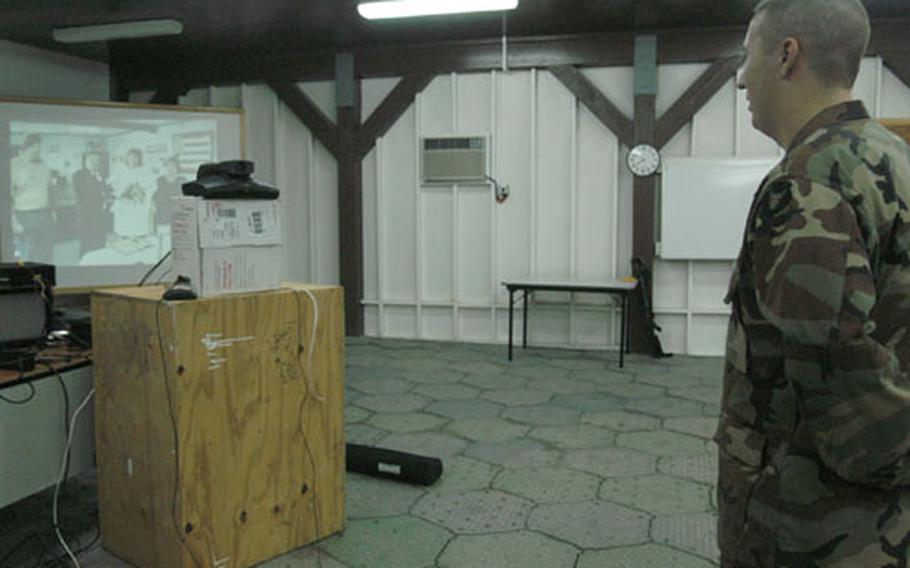 Spc. Jaime Severe of Headquarters and Headquarters Company, 1st Battalion, 194th Armored Regiment says his vows to his wife, Susette, during a videoteleconferencing wedding. Severe was at Eagle Base, Bosnia and Herzegovina, and his wife in Stillwater, Minn. They wanted to get married before his deployment ended, and modern technology made it happen. (Ivana Avramovic / S&S)

Severe, 30, and his bride, Susette Kompelien, 32, stood in videoteleconferencing rooms with an ocean between them &#8212; he in Bosnia and she in the United States &#8212; and exchanged vows last week with family members by her side and fellow soldiers by his.

For example, Severe was nervous before the ceremony.

For a brief moment everyone got a scare when a soldier accidentally flipped a switch, shutting off the electricity and the connection with the VTC room in Minnesota was lost.

After a few tries, they got reconnected.

While a VTC room is available at Camp McGovern where Severe is deployed, he traveled to Eagle Base where the connection is more reliable.

&#8220;We pulled a few strings to give him the best quality [of signal] we could give him,&#8221; Spc. Joel Siebring, a VTC clerk with the 34th Infantry Division, said, explaining they asked the cybercafe next door at Eagle Base to shut down for a couple of hours so users there would not take away from the quality of the signal during the wedding.

The newlyweds could not have a party right after the wedding ceremony, but they will get to go on a short trip together just before Christmas.

They will take advantage of Severe&#8217;s upcoming rest and recuperation and meet in Budapest, Hungary, where they will both have wedding rings on their fingers.

The couple initially planned to get married during that trip, but found out they could only do it if they spent more than 30 days in the country. That&#8217;s when they opted for the VTC ceremony.

The newlyweds plan to have a large church wedding when Severe returns from the deployment.

Spc. Eric Sarvela of Headquarters and Headquarters Company, 2nd Battalion, 194th Armored Regiment, one of Severe&#8217;s friends, and other soldiers at the wedding wished Severe the best, and then made sure he didn&#8217;t get off without some cake smeared over his face.

This was the second VTC wedding in Bosnia. A soldier from the previous rotation also got married while on deployment.