Soldier cyclists at Ledward, Conn Barracks check themselves and bikes before heading out 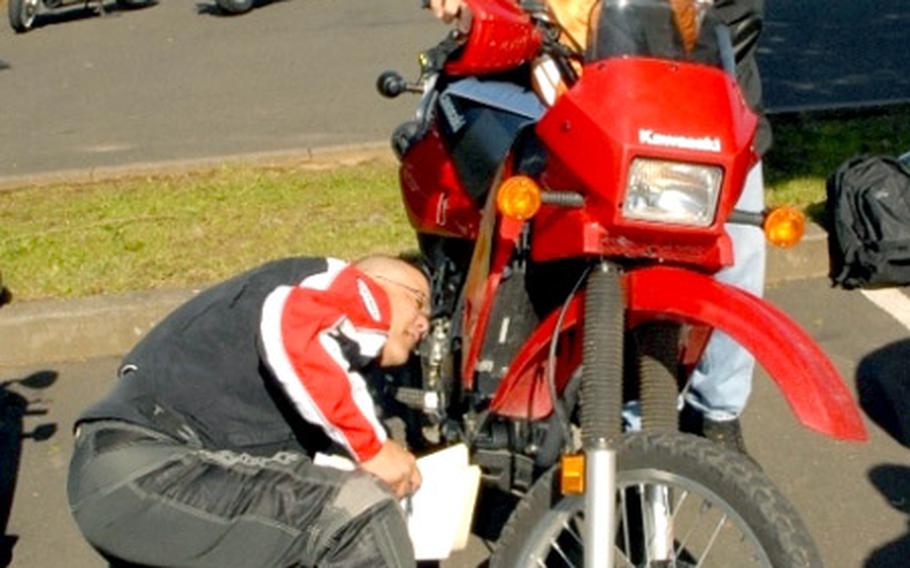 SCHWEINFURT, Germany &#8212; Col. J.B. Burton wasn&#8217;t about to just let his soldiers jump on their motorcycles for the long Memorial Day weekend.

Since the beginning of 2006, there have been 19 &#8212; 11 in April alone &#8212; motorcycle-related deaths Armywide. In response, Burton, the 2nd Brigade Combat Team commander, mandated that all the riders under his command participate in quarterly check rides to maintain safety and awareness.

&#8220;We&#8217;re all soldiers, we&#8217;re all riders, and we have a responsibility to each other,&#8221; Capt. Chad Ramskugler, commander of Company D, 9th Engineer Battalion, told a group of motorcyclists Wednesday during a safety training event at Ledward and Conn Barracks. Ramskugler is also the lead instructor for the Check Ride program for 1st Infantry Division&#8217;s 2nd Brigade Combat Team.

The two rides held this week were mandatory for any 2nd BCT soldiers wanting to ride during the long weekend. All told, 41 riders took part.

With as many riders as 2nd BCT has, and the number of cycle deaths as high as it is, Ramskugler wasn&#8217;t shy in telling the group that statistically one of their number could die this year from riding.

He stressed the three main reasons for the check rides: to make sure that all riders meet U.S. Army Europe standards for licensing and protective gear; to assess the skill and risk levels of all riders within 2nd BCT; and to build camaraderie between all riders and mentorship between experienced and inexperienced riders.

The training began at 9 a.m., when riders paired off and checked each others&#8217; bikes, paying attention to things such as chain tension, tire wear and fluid levels. Then came an hourlong class, with groups talking about dangers while riding and how to navigate things such as intersections and sharp turns. They also discussed the need for having a license, ID card, current Motorcycle Safety Foundation Course card, registration and proof of insurance with you every time you ride.

&#8220;Just because I&#8217;m low-risk doesn&#8217;t mean I&#8217;m not going to get into an accident today,&#8221; Ramskugler told the group after they had completed risk-assessment worksheets, going over everything from length of ownership to age to amount of time riding in Europe.

&#8220;New riders need good gear. If you hear someone talking about getting a bike, tell them they need good gear,&#8221; Ramskugler said, adding that it&#8217;s a good idea to purchase gear before purchasing a bike. &#8220;You can always wear protective clothing. You can still be cool, still be comfortable and still protect yourself.&#8221;

After the classroom instruction came practical exercises including emergency stopping, where each rider attempted to slow down as fast as possible from 30 mph without locking their real wheel, and emergency swerving to avoid an object or pothole in the road while traveling at 30 mph.

Once the exercises were completed, the riders took to the road, traveling 120 kilometers to and back from Kreutzberg on everything from rural town roads, highways and autobahns.

The junior rider of the group, Sgt. 1st Class Kevin Jackson, a tank platoon sergeant with Company B, 1st Battalion, 77th Armor, has been licensed for about a year. He said he was glad to get the chance to come out and ride with other soldiers.