Solar project sees light of day at Navy base 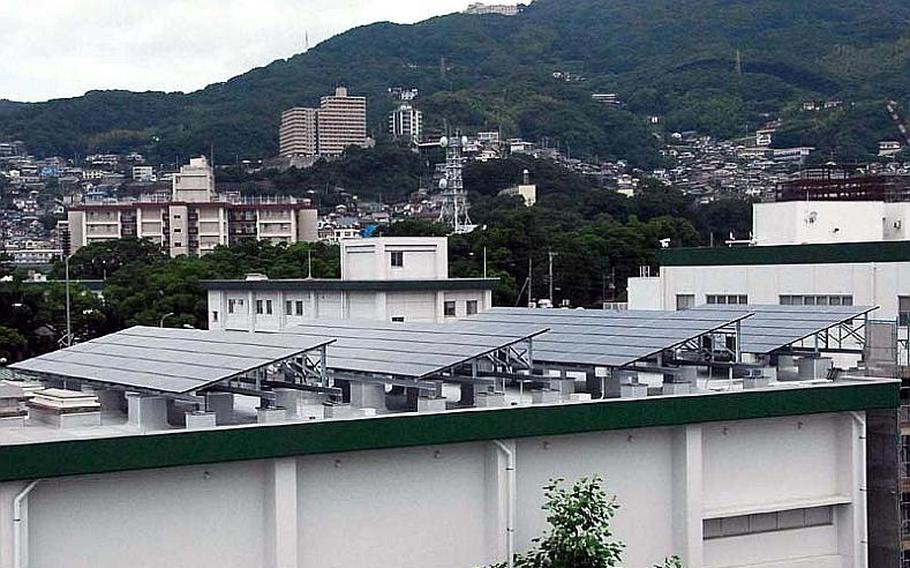 A series of solar panels on the roof of the theater at Sasebo Naval Base, Japan, were switched on for the first time Friday. (Travis J. Tritten/Stars and Stri) SASEBO NAVAL BASE, Japan &mdash; With the flip of a switch, the energy of the sun began flowing into the Sasebo Naval Base electric grid Friday.

A series of five rooftop solar panels caught sunlight and transferred it to a converter station where it was supplied to base sockets and outlets as electricity.

After three years of work, Sasebo was finally seeing the benefits of its first solar project.

&ldquo;We&rsquo;re going to take that design and multiply it across roofs here, and hopefully we&rsquo;ll have a lot of solar projects going up soon,&rdquo; said Lt. Cmdr. David Kang, base public works officer. &ldquo;I think the goal of 100 percent energy efficiency is foreseeable in the future.&rdquo;

The Department of Defense is pressing renewable energy, and U.S. military facilities around the world are building or planning similar projects.

For now, the solar panels on the base theater and public works building supply just a small fraction of the base&rsquo;s power needs. A sunny sky at midday will cover only .002 percent of the needed electricity.

Kang said the project is the first small step in a move toward renewable energy that could quickly increase that percentage and even make the base energy independent within a couple of decades.

Another series of panels is slated to be installed on the roof of the Navy Exchange as early as next summer, said Jonathan Currie, energy manager for Naval Facilities Engineering Command. That project could add another 60 to 80 kilowatts from about 20 large panels to the five panels that now can produce a maximum of 40 kilowatts, Currie said.

&ldquo;It all depends on funding,&rdquo; he said. &ldquo;We are negotiating now.&rdquo;

The plan is to continue that pattern on rooftops across the base, according to Kang and Currie.

The proliferation of solar panels and technological improvements that increase solar cell efficiency could greatly reduce reliance on the traditional electric grid in coming years, they said.

But the real breakthrough could come from geothermal energy, which is plentiful in Japan.

Currie said the base has commissioned a study of whether the Navy could use the thermal energy that feeds the famous hot spring baths in the area to create electricity.

The study has yet to begin, and that energy source remains a long shot for now.

&ldquo;This is a prime location for geothermal,&rdquo; Kang said. &ldquo;We are going to try to tap into that and create some energy.&rdquo;