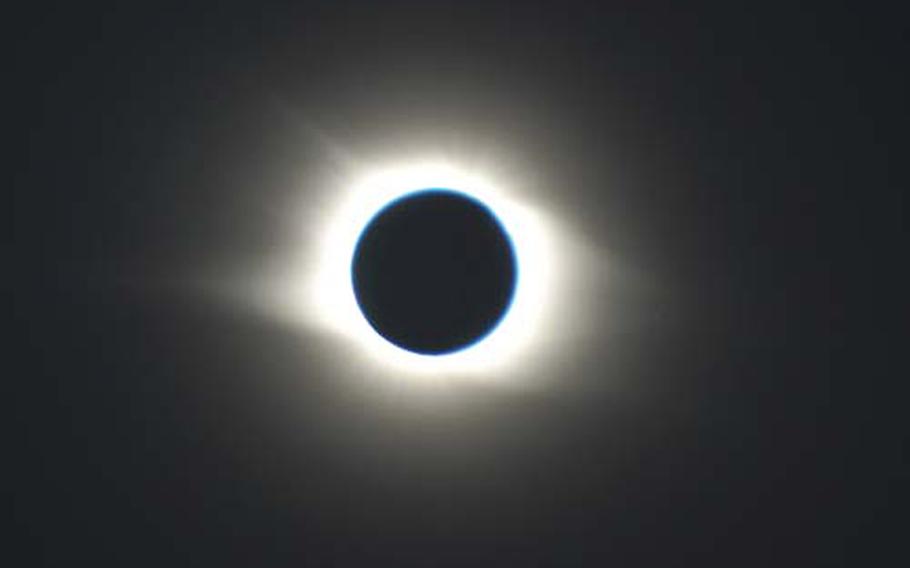 FILE - In this Friday, Aug. 1, 2008 file photo, the total solar eclipse is observed above the Siberian city of Novosibirsk, Russia. Millions of people across Asia on Wednesday, July 22, 2009 will witness the longest total solar eclipse that will happen this century, as vast swaths of India and China, the entire city of Shanghai and southern Japanese islands are plunged into darkness Wednesday for about five minutes. (AP File Photo / Ilnar Salakhiev)

The longest solar eclipse this century will result in midday twilight Wednesday as the moon passes between the sun and Earth over Asia.

The eclipse will peak for roughly six minutes at about 11 a.m. in Japan and South Korea as it makes its way across Asia. However, the moon will begin casting its shadow over the sun about an hour before the peak, then start regressing for about an hour afterward.

A point in Tokara Islands between mainland Japan and Okinawa will experience a total eclipse, as will Iwo Jima, the island about 660 miles southeast of Tokyo, according to Yoshinori Suematsu with Japan&#8217;s National Astronomical Observatory.

Wednesday&#8217;s eclipse will be the longest of the 21st century, Suematsu wrote in an e-mail to Stars and Stripes.

The eclipse starts in India and moves east over China before casting shadows over Japan and South Korea, eventually terminating in Hawaii, where it will peak at about 20 percent.

The astronomical event will not be visible in the States, although observatories around the world plan to Web-cast the event for those not lucky enough to see it in person.

But people should be careful not to look directly into the sun during the eclipse, warned Dr. Glen Hikida, an optometrist for the Army and Air Force Exchange Service, in a news release issued by Camp Foster on Okinawa.

Doing so could result in serious retinal damage that may not surface until hours later, Hikida said.

Eyewear designed for solar eclipses, special welding glass or a pinhole projector are the best methods for watching the eclipse, according to the release.