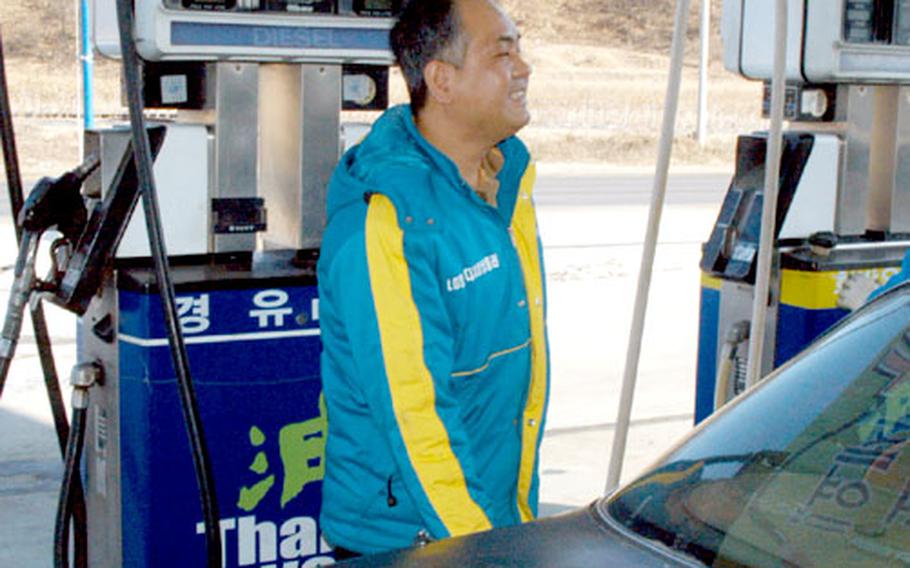 The shiny modern blue and green &#8220;Thank You&#8221; brand gas and diesel pumps contrast starkly with the ancient brick farm shacks littering the countryside nearby. But last year, Pak got the shock of his life when downdrafts caused by a hovering U.S. military helicopter en-route to the range caused his awning to collapse, doing just over $12,000 in damage.

&#8220;They hovered very low over the roof. Suddenly they went up and a lot of wind happened,&#8221; recalled Pak, huddling over an oil heater in his office next to a large, prominently displayed, saxophone he sometimes plays.

However, instead of reaching for the baseball bat he keeps next to his desk for personal protection, he picked up a camera, photographed the damage, and filed a compensation claim with the South Korean government.

The Status of Forces Agreement allows South Koreans whose property is damaged by the U.S. military to claim compensation. It took Pak five months but, eventually, he was fully compensated for the damage, allowing him to return his gas station to pristine condition. He now has a second claim lodged for damage done to his property in a crash involving a vehicle from Camp Humphreys, which he also photographed.

The vehicle was on its way to Peongpyeong Range, near Pocheon, when it U-turned into the gas station, crashed into a building and a pole causing almost $5,000 damage, said Pak, who has joined nearby farmers in a petition calling for the closure of the training area.

The residents claim noise from explosions causes livestock to miscarry, cows to produce less milk, cracks to appear in buildings, and children to have convulsions.

&#8220;They have trouble with their televisions and the phones because of the noise,&#8221; said Pak, who will be one of several speakers to address a meeting of government officials and village leaders on Feb. 25.

The meeting covers the northern part of Gyeonggi Province, where most 2nd ID soldiers are based.

Se-Jong Lee, assistant director in charge of civil-military relations for Gyeonggi Province said most South Koreans do not know about the claims process.

&#8220;If their property is damaged by the U.S. military they just complain and that leads to anti-American feelings,&#8221; he said.

This month&#8217;s meeting will also feature talks by a lawyer from the Seoul High Prosecutor&#8217;s Office, which decides whether or not claims warrant compensation, and an official from the U.S. 8th Army.

If the adverse effects or damage occur in soldiers&#8217; free time, the U.S. government is liable for 100 percent of any settlement.

Lee said since November 2002, when the claims system was set up, there have been 30 claims filed and 18 resolved.

In one case, residents near Camp La Guardia, which is surrounded by a suburb of Uijongbu City, complained about loud music from a recreation building where soldiers have parties on the weekends.

The 2nd Infantry Division&#8217;s response was to erect soundproof walls and windows in the building and order soldiers not to play loud music there after 9 p.m.

In another case listed by the province, two U.S. armored vehicles damaged 132 juniper trees while passing a rice mill near Paju City during a joint ROK/U.S. army exercise in October 2002.

Representatives of the 2nd ID paid a visit to the civilian claimant, who withdrew his demand but asked the division to avoid a recurrence.

A Yeonchoen County farmer alleged two U.S. helicopters flying low over his property last March blew away or knocked over 66 square meters of light-blocking covers in ginseng growing areas causing about $500 damage. The petitioner did not claim for the damage but wants USFK to be more cautious during future training, the Gyeonggi Province documents show.

Not all of the claims lodged by citizens are upheld.

For example, Dongducheon residents complained last year that untreated sewage was discharged from Camp Casey and Camp Hovey. However, a 2nd ID investigation did not uncover evidence of this, and the division assured Dongducheon City that immediate action will be taken if there are future complaints.

A farmer claimed artillery fire in the Peongpyeong training area caused 20 cows to miscarry and cracked walls in several houses and outbuildings in 2002. The Seoul Claims Office rejected that claim and the claimant is now considering civil action.

Pocheon churchgoers have also blamed artillery firing at Peongpyeong for cracks in church walls. However, last year Gyeonggi Province, after investigating the problems, informed the church that the damage is cased by drainage problems.

Complaints about noise from U.S. military helicopters that fly low over neighborhoods near Camp Stanley affecting more than 66,000 residents have also not been resolved.

The 2nd Infantry Division has held seminars with pilots and other experts but has failed to find alternative routes for the helicopters due to large electric steel towers nearby and expansion of residential areas, the documents state.

&#8220;We have detailed records of where our helicopters have flown [for example]. We match those against when and where the damage may have happened and we send it up our chain of command so people can be compensated and damage repaired.&#8221;