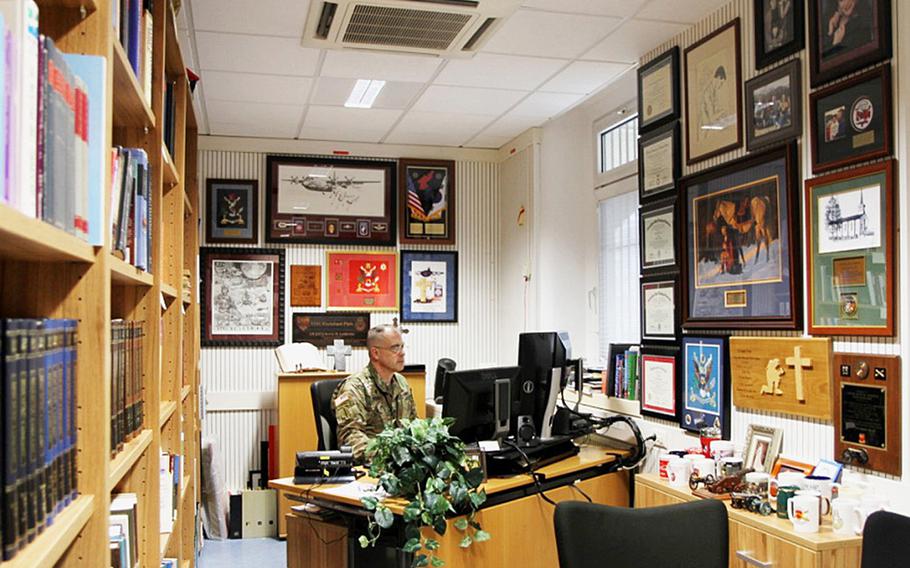 STUTTGART, Germany — When Lt. Col. Kevin Leideritz arrived at Special Operations Command Europe’s Patch Barracks headquarters in late 2016, it marked the first time in the unit’s 62-year history that it had a chaplain of its own.

The move to establish a full-time chaplain post is helping to open doors inside Stuttgart’s insular special operations community, where leaders say troops under stress could now be more inclined to seek out help.

“It’s incredibly valuable when there’s someone who wears the uniform, who is part of the organization that we see every day, that they can turn to in confidence for guidance or just to listen,” said U.S. Navy Command Master Chief Andrew I. Harrison, SOCEUR’s senior enlisted leader. “If someone is maybe unsure of going to seek resources to help, the chaplain may be that first step.”

Over the years, SOCEUR has gone without a dedicated chaplain to minister to its members, relying instead on chaplains from other units or a temporarily assigned adviser. SOCEUR falls under U.S. European Command and plans sensitive military operations on the Continent carried out by teams of Green Berets and Navy SEALs.

Many SOCEUR members bring with them years of combat experience, extensive deployment histories and long stretches away from home that can complicate the home environment.

“The higher op tempo, repeated deployments can accentuate some of those stressors — additional time away from home can be additional stress,” Leideritz said.

There is enormous mystique surrounding elite special operations forces, who tend to get mythologized by Hollywood and lionized by fellow servicemembers. But in counseling such troops Leideritz sees the troops more similar to their conventional counterparts than different.

“Special ops folks have the same needs as everyone else does,” he said. “By and large the people in the special operations are regular folks that have trained extra.”

Leideritz said his job is to keep an open door, where servicemmebers can talk with the guarantee that the matter will remain private. “It is 100 percent confidential. You can share those things you are torn up about and don’t know where to go,” he said.

Inside units, chaplains have traditionally served as confidants, even for the nonreligious, when life’s problems emerge. Talking to a chaplain can be a first step toward seeking professional support for everything from marital difficulties to post-traumatic stress issues.

For SOCEUR leaders, bringing a chaplain into the command fold helps keep a pulse on the overall state of morale.

“A chaplain can also be a great resource for the command to gauge morale and stressors on the unit, because they are constantly speaking with service members, civilians and families,” said Harrison, SOCEUR’s senior enlisted leader. “Both he and I in our respective roles can help the commander see the ripple effects of decisions on our team and families.”