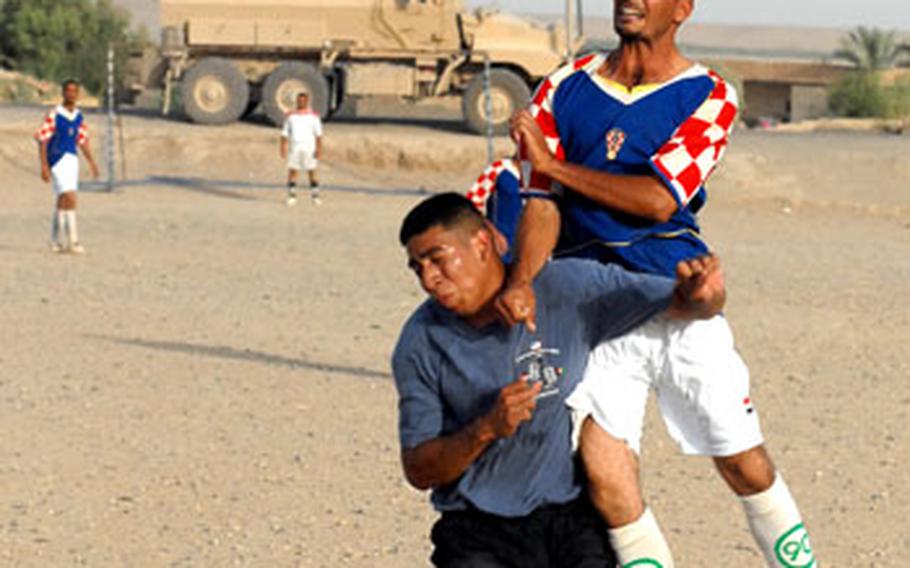 Riyadh Abdullah beats Pfc. Hector Salinas for a header during the game between Sabagiya, Iraq, residents and American soldiers. Competition between the two teams was intense, even though it was a friendly match. (James Warden / S&S)

It&#8217;s not often you see an infantry battalion commander &#8212; a Ranger Battalion combat veteran, at that &#8212; playing the pity card. Yet there Vanek was, talking down good ol&#8217; Team U.S.A. before the soccer match even started.

Soldiers with the 1st Battalion, 87th Infantry Regiment were supposed to play a team of "Sons of Iraq" security volunteers on Thursday, but the game time got moved and the volunteers were late arriving. So residents living near the Sabagiya field donned jerseys and formed a presumably less-prepared pickup team.

Even so, Vanek had reason to doubt his men&#8217;s chances at victory. They had yet to win a match against various Iraqi teams and had once lost by nine goals. A contingent of soccer-loving African security contractors who guard the battalion&#8217;s base outside Hawijah would probably have fared better on the pitch.

But the score wasn&#8217;t important in the various soccer games that had been taking place around the Hawijah district, an area west of Kirkuk that includes Sabagiya.

Brigade public affairs staff hyped the games as proof of Hawijah&#8217;s impressive progress. The area was once one of the region&#8217;s worst. Now American soldiers could play on Iraqi soccer fields in their shorts and T-shirts.

Then again, security wasn&#8217;t exactly absent from the area. Kiowa helicopters patrolled the skies, scouts watched the area from rooftops and Iraqi soldiers patted down residents who came to see the game.

The Americans played tenaciously, but their strategy consisted mainly of blocking shots and booting the ball as far downfield as possible to get it away from their goal. By halftime, it was clear which way the game was going.

Still, Vanek made good-natured trash talk. He promised that the Americans would make a comeback. If not, he&#8217;d help the mayor renovate the field.

Vanek, the head of the successful counterinsurgency effort in the area, knows all about winning. A few days before the match, he met Sheik Khalaf Ibrahim Ali to teach the "Sons of Iraq" leader to play checkers for an exhibition in Hawijah&#8217;s market similar to the Sabagiya soccer match.

"I will beat you," Ali chided Vanek before he&#8217;d moved his first checker.

And so Vanek sat at the edge of a rock-strewn soccer field &#8212; without body armor, a lit cigar in his mouth and the Army Times in his lap &#8212; watching his dust-covered soldiers valiantly lose 3-0. When it was over, he went over to the locals and congratulated them with a hearty smile.

"What a great opportunity to come together as two different cultures and share a common bond of sports &#8212; not Iraqis, not Americans, just soccer players," he said. "At least one team of soccer players, one team trying to be soccer players. Would you please join me in congratulating the coalition forces for at least trying?"