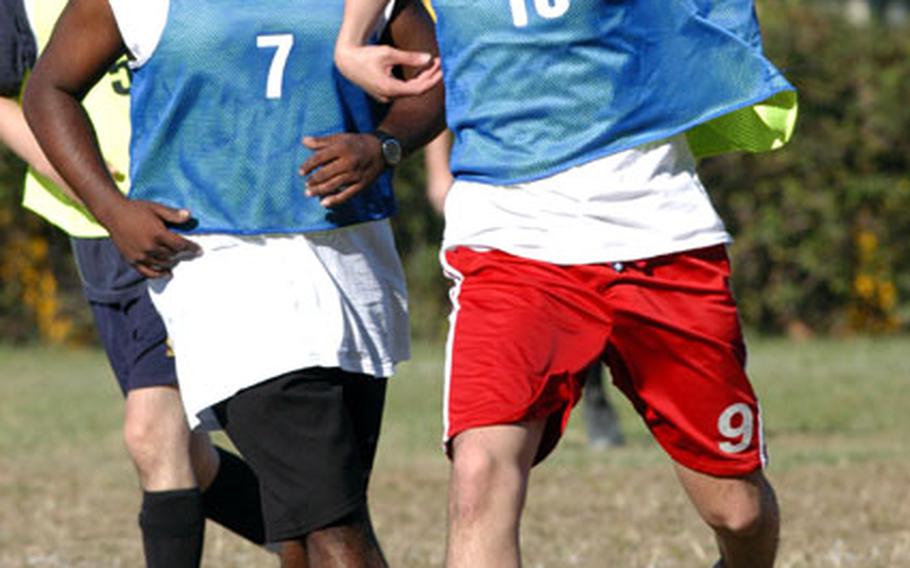 Mario A. Gomezsiercke (No. 10) dribbles the ball while Denzil E. D’Souza (No. 7) follows in support during a Taegu enclave intramural match. The two played for a team drawn from the 176th Finance Battalion and 516th Personnel Services Battalion. They beat the 19th Theater Support Command Team 4–2 earlier this month. An effort is under way to form an Area IV soccer club that would enable soccer lovers to play the game year-round. (Galen Putnam / Courtesy of U.S. Army)

PYONGTAEK, South Korea &#8212; When he was a soldier stationed at Fort Devens, Mass., more than a decade ago, Galen Putnam and fellow soldiers even played soccer against local colleges and prison inmates.

Putnam, 41, now is a Defense Department civilian working as command information officer with the Area IV Support Activity at Camp Henry in Taegu, South Korea. He&#8217;s starting an Area IV soccer club, to be open to active-duty servicemembers and civilians from the military community, including its South Korean employees.

Area IV takes in Army installations in Taegu, Camp Carroll in Waegwan and Camp Hialeah in Pusan. The club would afford soccer-lovers within the community a chance to play almost year-round, Putnam said.

They&#8217;d play other teams from within the U.S. military community and, Putnam hopes, also from local universities and perhaps from South Korean military installations in the area.

&#8220;The intramural season is so short and I would see people playing soccer out there in twos and threes all over the place but that&#8217;s not getting enough enjoyment out of the game,&#8221; said Putnam. &#8220;My idea is to get all these players under one umbrella.&#8221;

The club also could become one of the latest tools in the U.S. military&#8217;s Good Neighbor Program, which mandates that its military units in South Korea pursue varied ways of building friendly relations with the Korean public.

&#8220;A good part of this is the community relations aspect and using it to support the Good Neighbor Program,&#8221; Putnam said. Putnam took the first steps toward a soccer club for the Taegu area last month, mainly by talking to soldiers who took part in the inter-unit matches.

Sunday, about 20 people turned out for an informal first meeting; a formal organizational meeting is set for Nov. 6.