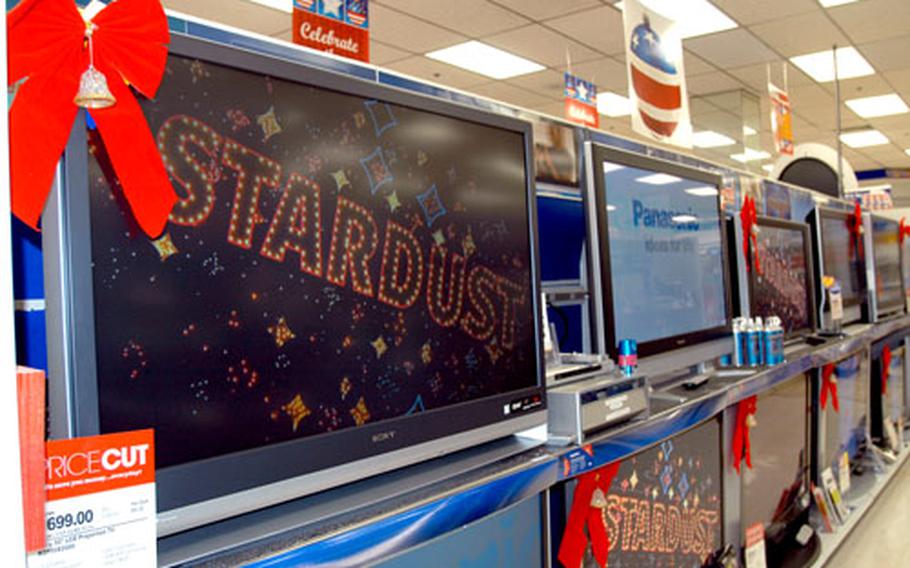 Hands-down, military exchange store managers say, the must-haves are electronics, such as large-screen liquid crystal display and plasma televisions, iPods, laptop computers and DVD players. Also popular so far this year are designer purses and appliances in snazzy colors, such as reds on coffee makers.

And what about the old-fashioned book?

At Misawa Air Base in northern Japan, some consumers are buying up the written word in the magazine rack. TV chef Rachael Ray&#8217;s new lifestyle magazine recently sold out the first day it appeared in the store, said Dottie Tramuel, AAFES Misawa sales area manager for the PowerZone and Bookmart. But new issues just came in, she added.

In the toy department, the latest Tickle Me Elmo disappeared nearly as fast as it hit the shelf.

Online shopping site eBay reported last week that the average sale price of the giggling, wriggling doll was $66.35, more than $26 over retail value.

Other hard-to-get items this year &#8212; both overseas and stateside &#8212; are Sony&#8217;s PlayStation 3 and Nintendo&#8217;s Wii game consoles. Most military exchanges in the Pacific received or are to receive only limited quantities of each, varying from about six to 27, according to exchange managers. Stores that do have them have already held or are planning drawings for a chance to purchase one.

On Saturday, both the Camp Foster and Kadena Air Base main exchanges will hold a drawing for a chance to purchase a PlayStation 3 or Wii game console from among thousands of entries across Okinawa, according to an AAFES news release. AAFES officials said they still don&#8217;t know yet how many they&#8217;ll receive throughout the Pacific. Manufacturers sent the game systems to Okinawa for AAFES stores at the same time they were sent to U.S. stores, the release said.