Snowfall adds a twist to live-fire drills at Rodriguez Range 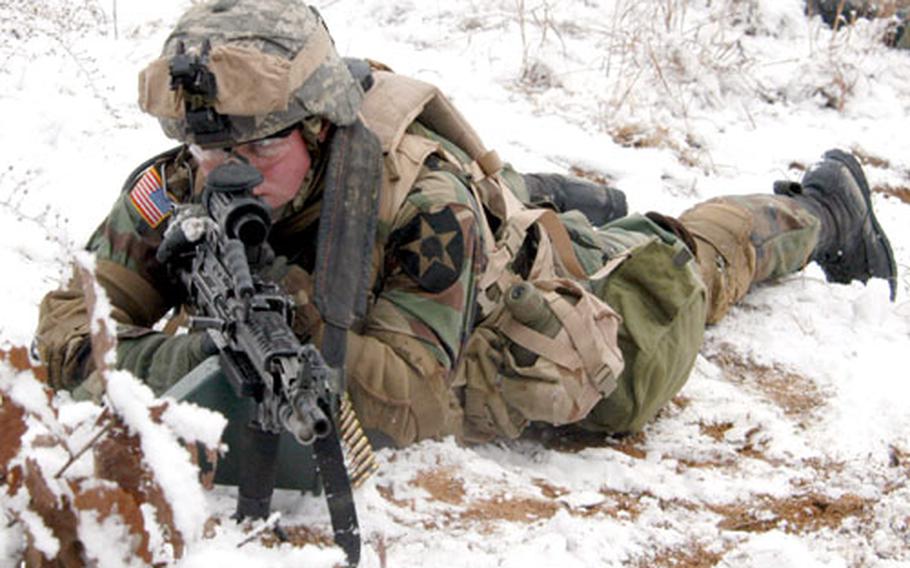 A Manchu machine gunner takes up a defensive position in the snow at Rodriguez Range on Thursday. (Seth Robson / S&S)

A Manchu machine gunner takes up a defensive position in the snow at Rodriguez Range on Thursday. (Seth Robson / S&S) 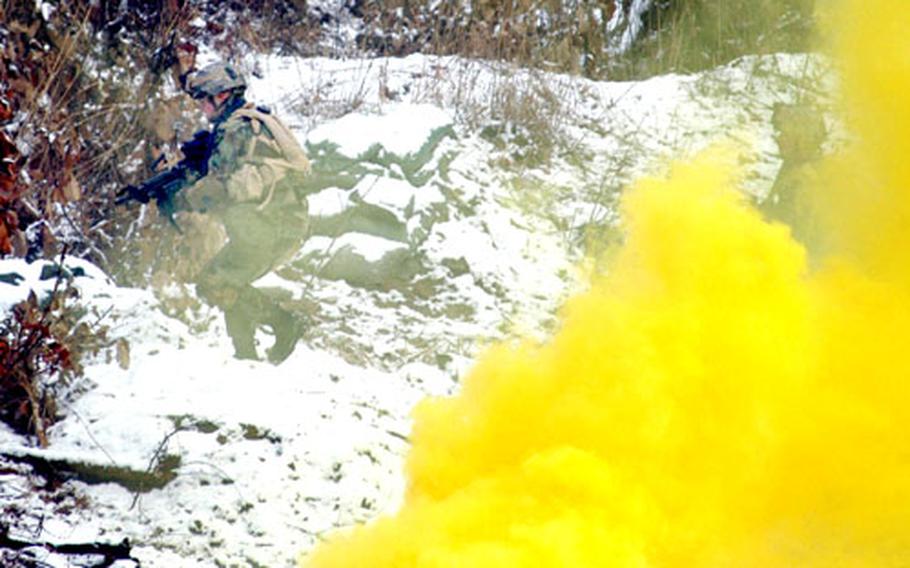 A member of the assault squad rushes a bunker complex at Rodriguez Range on Thursday. (Seth Robson / S&S)

Snow fell heavily as the Company A, 2-9 soldiers, the Manchus, prepared for the early morning live-fire training. By the time the first squads were ready, an inch of snow covered the ground and trees.

The training prepares troops for a platoon-based live-fire next week involving the Bradleys and tanks with support from mortars, artillery and U.S. Air Force F-16s and A-10s, he said.

&#8220;The snow enhances training,&#8221; he said as he followed a squad of machine-gunners preparing to attack a bunker complex on the range. &#8220;&#8230; This is one condition we would probably find ourselves fighting in, so we have to adapt.

&#8220;This isn&#8217;t just a bunch of crazy guys running around shooting in the woods,&#8221; Kuhn added. &#8220;It takes a lot of skill. In this restrictive terrain we can&#8217;t get our mounted forces through. We have to bring our infantry up to destroy the enemy. That allows the engineers to conduct a breach and allows the tanks and Bradleys to continue to attack.&#8221;

The machine-gun squad stalked up a snowy, tree-covered hillside, then dropped to the ground and crawled into position overlooking the bunkers, near the bottom of another hill.

Pfc. Amber Nicanor, 30, of San Jose, Calif., had his work cut out, dragging 60 pounds of ammunition and a machine-gun tripod up the hill for the support-by-fire mission.

When everyone was ready, the leader of the support-by-fire squad, Cpl. Joshua Dillree, 24, of Nashville, Tenn., opened fire on pop-up targets around the bunkers &#8212; the cue for his machine-gunners to join in.

Meanwhile, an assault squad was standing by at the bottom of the hill. After a few seconds of blistering fire, the squad threw a yellow smoke canister signaling the machine-gunners to aim away from the bunkers.

Then Sgt. Adam Sheskey, 23, led the squad forward to take the objective.

The Operation Iraqi Freedom veteran said he had done the squad live-fire training at least 15 times before but his previous unit, 1st Battalion, 14th Infantry Regiment, &#8220;is from Hawaii so this is the first time I have trained in snow.&#8221;