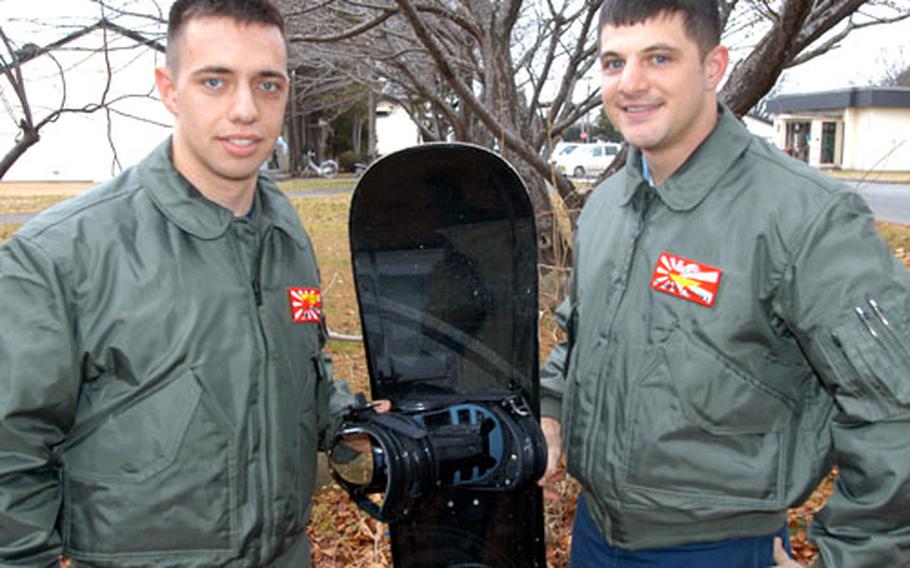 The sailors, with U.S. Navy Information Operations Command, came ready to board last Sunday on what was to be Hakkoda Ski Resort&#8217;s opening weekend.

But they arrived a few hours early. The main runs weren&#8217;t to open until that afternoon. So they headed for the back-side slopes.

And what they expected to be an exhilarating, 45-minute run through the trees turned into an almost 24-hour ordeal, pitting man against mountain.

Jarrells, 25, of Dublin, Va., and Pratt, 20, of Meadville, Pa., ended up getting lost that day in the vast Hakkodas, an eight-mountain range equally famous for its deep, fine powder, formidable weather and tragic tales: In 1902, almost 200 Japanese soldiers froze to death in the Hakkodas after getting trapped in a blizzard.

After a grueling, frigid night of trying to slide, push and huff their way down the mountain in 3- to 8-foot snowdrifts, the sailors made their way out.

But theirs is a cautionary tale of what can go wrong &#8212; and right &#8212; in unforgiving winter wilderness.

The back side of the mountain

Jarrells and Pratt had some boarding experience. Jarrells had boarded a few times at Hakkoda, though never on the back side.

Those &#8220;aren&#8217;t open to go all the way down this time of the year,&#8221; he said, because the snow still is soft and not packed. Early-season skiers and snowboarders go partway down, then snowshoe back up and take the ropeway down.

Poles along the route they chose were lined up for about 300 meters, said Takanori Fukuchi, operation division chief of Hakkoda Ski Resort ropeway, adding that language differences may have led to a miscommunication between the worker and the sailors.

Jarrells and Pratt planned to take the route to the bottom, where it opened onto the road, then hike back to the resort.

They were dressed warmly but weren&#8217;t carrying water, food, snowshoes, shovel &#8212; essential for the Hakkoda back country, experts say. They brought a cell phone but left a pocket-sized Global Positioning System device in their truck.

The snow got deep &#8212; fresh, fine powder that bogged down their boards like quicksand. The men pushed onwards on snowboards that became sleds &#8212; with one knee on the board and the other leg pushing off. More energy would be wasted high-stepping through the knee-high snow, they said.

Not knowing how close to the bottom they were, Jarrells thought the best way out would be to cut across the ridgeline and head back down to the resort.

By the light of a full moon

The drainage was a wide swath with 4- to 8-foot drifts of snow.

&#8220;Impassable,&#8221; Pratt said. &#8220;We realized we were in trouble so we started searching for a signal with the cell phone. It took us another hour of pushing down into the creek bed before we could get a signal to call for help.&#8221;

They reached a friend on base at about 4 p.m. Base officials were notified. They got word to the ski resort. But the news that came back wasn&#8217;t good.

The resort did send a five-person team to scour the mountain from 5 p.m. to 6 p.m., but they returned empty-handed, Fukuchi said.

It now was dark and Jarrells and Pratt didn&#8217;t have a flashlight. Jarrells had dropped his tiny key-ring light when trying to turn it on while wearing gloves. But the moon was full and despite the intermittent cloud cover, they had enough light to see through their goggles.

They were in contact with NIOC Command Master Chief David Flamand and executive officer Lt. Cmdr. Chris Bowen, who were headed up the mountain along with Petty Officer 1st Class Jeremy Stover, an NIOC independent duty corpsman, and Ron Stark from Outdoor Recreation.

Bernard, called on for his expertise, helped base officials figure out which creek bed the sailors likely found and advised them to follow that out to the road.

One NIOC vehicle parked where the creek met the road, while another roved around blaring a siren and bullhorn and throwing floodlights.

Jarrells and Pratt heard the noises but couldn&#8217;t determine from which direction they came. Sound was bouncing off the ridges, they said.

At 1:30 a.m., when Pratt&#8217;s cell phone died, communication with the sailors was lost. That&#8217;s when Flamand began to worry. A sign said the temperature at the resort was -7 degrees Celsius (about 19 degrees Fahrenheit), flurries were intermittent and frigid wind was a constant factor.

Jarrells and Pratt, meanwhile, kept moving. They&#8217;d considered sleeping at midnight under the pine trees, but Pratt&#8217;s boots were wet from a fall into the creek, and he had to keep his feet moving.

The sailors tried to follow the creek as best as they could, a few times crisscrossing the snow- packed drainage when it got too sheer on the edges. Fallen trees, mountain bamboo, even their snowboards, shoved into the snow sideways like steps, helped lift them out of some tall ravines. They continued to inch slowly down the mountain, wishing they had snowshoes.

It crossed their minds that they might not get out, especially when the sun rose and no road was in sight, Pratt said.

But they forced themselves to think positively, calling on their NIOC aircrew survival training. Four days without food in the California wilderness taught them they could stay physical without sustenance, they said.

The road and rescue

Finally, they spotted a familiar landmark about 45 minutes after daybreak, Monday morning, Dec. 4.

Pratt &#8220;recognized the gondola going up the other ridge line, which immediately told me exactly where I was,&#8221; Jarrells said.

They were whisked back to base hospital for a checkup, the adrenaline still pumping, the relief overwhelming. Both had minor frostbite: Pratt on the tips of fingers and toes, Jarrells on the tip of his nose. Flamand said it was gone the next day.

The sailors will get the opportunity to share those lessons.

Pleasure can turn into peril in the Hakkodas

But all that snow and natural terrain means it&#8217;s not recommended for beginners. And people shouldn&#8217;t venture in the back country unless they&#8217;re prepared and experienced, Bernard said.

On his Web site, www.hakkodapowder.com, Bernard says: &#8220;Expect the unexpected. Sunshine can turn into no visibility without warning.&#8221;

He warns that every year somebody gets lost and that there have been some deaths as well.

Takanori Fukuchi, operation division chief of Hakkoda Ski Resort ropeway, said people who get lost fall into two categories: They follow an official course but get lost because of bad conditions, or they go off course, thinking they&#8217;ll be OK.

In the past several years, he said, there have been several instances where people were lost &#8212; and most were base residents from Misawa who do not follow the course and go their own way.

His advice for those who do get lost: Save your energy, keep out of the wind, dig a hole in the snow and wait until morning because a rescue team will conduct a search.

In Aomori Prefecture, unlike some other prefectures in Japan, the Japanese government does not charge individuals for search-and-rescue, Fukuchi said.

Come prepared for the worst

Outdoor Recreation at Misawa Air Base lists what to &#8220;pack to survive&#8221; for snowboarders, skiers and snowshoe hikers who venture into the Hakkoda mountains. Suggested minimum required items are:

Also, pack an extra pair of socks, gloves and a spare hat. Leave your itinerary with someone and notify the person of any changes.