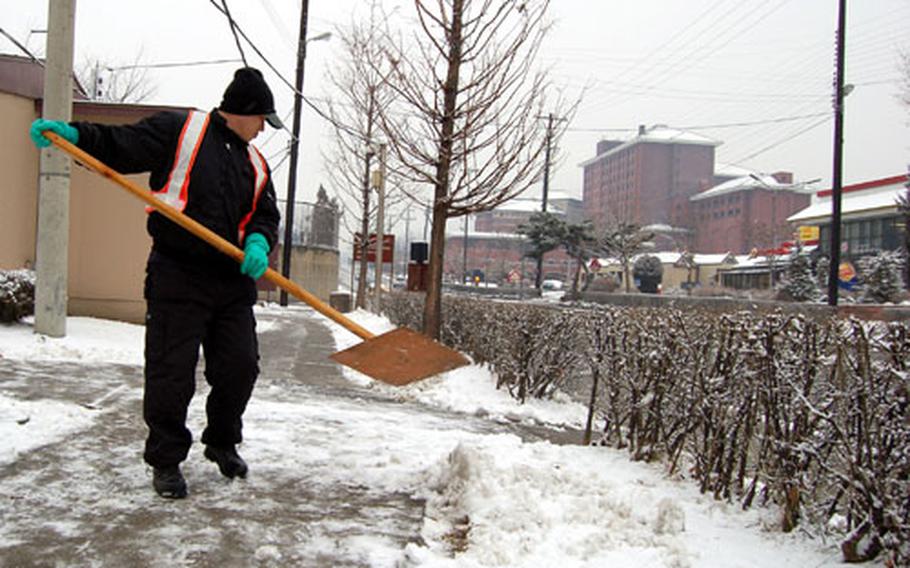 Yi Tong-hun, Department of Public Works, pushes snow off the sidewalks at U.S. Army Garrison Yongsan on Friday. The garrison received about 1/2 inch of snow, leading to six traffic accidents and the closure of two roads. (Jimmy Norris / S&S)

Yi Tong-hun, Department of Public Works, pushes snow off the sidewalks at U.S. Army Garrison Yongsan on Friday. The garrison received about 1/2 inch of snow, leading to six traffic accidents and the closure of two roads. (Jimmy Norris / S&S) At Yongsan, about &#189;-inch of snow closed parts of the installation, including the hill leading to the gas station near Gate 52 and the road linking Camp Coiner to the garrison&#8217;s main post.

Some school buses were late dropping students off in the morning, but Yongsan spokesman David McNally said all the children were safely delivered to school.

Yongsan officials reported six traffic accidents on the installation or at the gates; there were no injuries reported.

One member of the Yongsan community said the snow caused delays while driving on post.

The drive is normally about five minutes.

Road conditions were amber through most of the area, with the exception of Command Post Tango, which was red, and Camp Market, which was green late Friday afternoon.

USAG Humphreys got about an inch of snow.

Road conditions at Humphreys were amber by late afternoon, but camps Eagle and Long were red, meaning only emergency-essential military vehicles were allowed on the road.

In the Uijeongbu area, with about 2 inches of snow on the ground, officials declared road conditions red and told nonessential civilians to go home shortly before 3 p.m.

There were no injuries or accidents, said Red Cloud spokeswoman Margaret Banish-Donaldson. She said very few people there are authorized to have their own cars.

Osan Air Base received half an inch of snow. Road conditions were amber through early afternoon and were downgraded to green at 12:15 p.m.

USFK weather forecasters were predicting the snow would stop late Friday, but some community members were planning on staying indoors. &#8220;I don&#8217;t see it being a very good weekend for getting out and traveling at all,&#8221; said Capt. Ebony Calhoun of the 176th Finance Company.

Amber &#8212; Military vehicles can use the highways for official business only. The drivers of privately owned vehicles are urged to drive cautiously and drive according to rules for military vehicles.

Red &#8212; Military vehicles, other than those on emergency-essential business, will not be driven. Other military vehicles require the signature of a colonel or equivalent-ranking civilian to use the roads. Snow chains or similar devices are required.