Snow shuts some bases in England 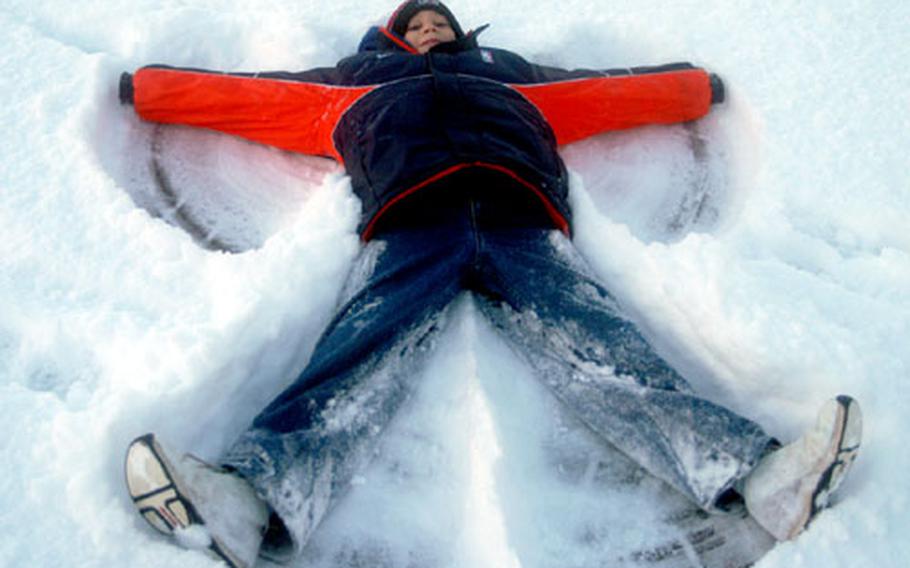 Caleb Spencer, 10, makes a snow angel Wednesday morning at RAF Mildenhall, England. A snowstorm closed Lakenheath Elementary School, where Caleb is a fourth-grader, along with other schools at RAF Lakenheath and RAF Feltwell. (Ron Jensen / S&S)

Caleb Spencer, 10, makes a snow angel Wednesday morning at RAF Mildenhall, England. A snowstorm closed Lakenheath Elementary School, where Caleb is a fourth-grader, along with other schools at RAF Lakenheath and RAF Feltwell. (Ron Jensen / S&S) 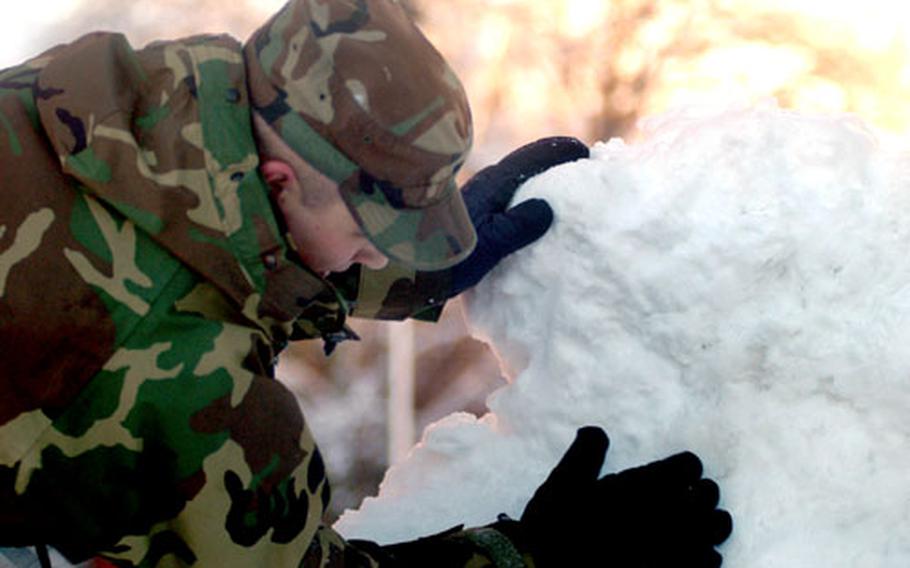 Airman 1st Class Adam Baldwin of the 100th Comptrollers Squadron at RAF Mildenhall, England, tries to fashion a dollar sign from a pile of snow at the base. Schools were closed and work was delayed after a snowstorm hit the area before midnight Tuesday. (Ron Jensen / S&S)

RAF MILDENHALL, England &#8212; A snowstorm anticipated for several days arrived near midnight Tuesday, draping the broad landscape of east England with a clean white blanket more than 3 inches thick before leaving a star-filled pre-dawn sky in its wake.

By midafternoon Wednesday, Mildenhall was urging squadrons to send people home early if possible. Also, the base declared a yellow alert for Thursday, meaning all nonessential people could go to work later than usual.

He said another storm headed toward England&#8217;s East Anglia region was expected to add 1 to 3 inches. Soon after midday Wednesday, flakes were again falling from a sky that had been clear and blue all morning before clouds rolled in before noon.

The temperature was below freezing with enough of a breeze from the north to make it feel colder.

The 48th Fighter Wing called off flying operations for the day at RAF Lakenheath, said Maj. Francisco Hamm, the base spokesman.

Balken said the wing went to yellow alert about 4 a.m. as snow still fell. There had been no change to that as midday passed. The speed limit on the slick base roads was 5 mph.

&#8220;I thought it was great,&#8221; 10-year-old Caleb Spencer, a fourth-grader, said of the news that school had been canceled. He is the son of Master Sgt. Ronnie Spencer of the 314th Recruiting Squadron, who had recently transferred to England from San Antonio.

All other Department of Defense Dependents Schools in England, from RAF Menwith Hill in the far north to RAF Croughton in the west and London in the south, held classes as usual.

Classes were held, too, at RAF Alconbury, about 40 miles west of RAF Mildenhall, despite a blanket of snow on the ground.

Kadie Duncan, a volunteer at Alconbury High School, is from south Georgia and saw snow for the first time in her life Wednesday morning.

Roads were slick from the packed snow, but Suffolk County police said traffic accidents were few and far between as people drove more slowly than usual.

She said minor accidents were mostly the result of people sliding on the slick roads, but there were no serious accidents.