Snow in Tokyo has little impact on nearby bases 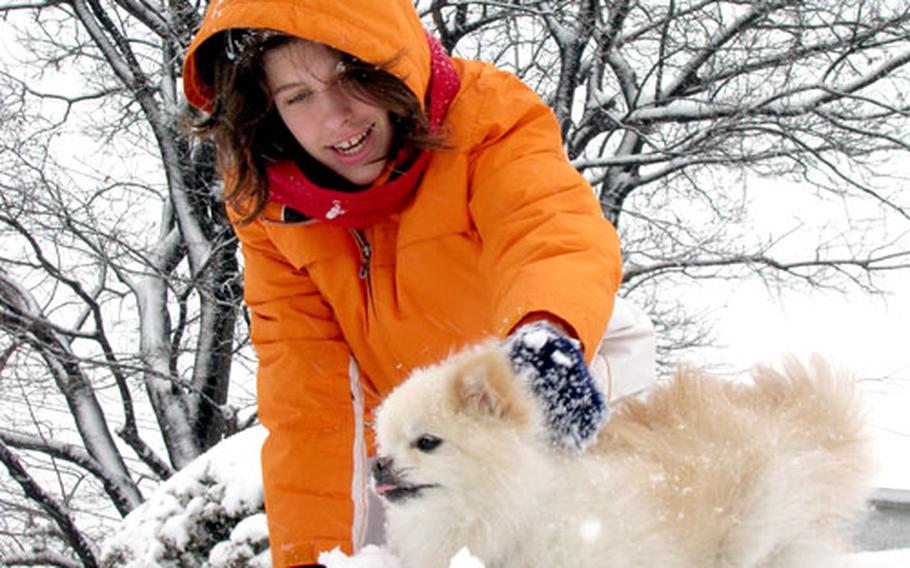 Kinnick High School student Elizabeth Duncan plays in the snow Saturday with her dog Kai at Negishi Base. This was the first snow of the year for the small Navy housing area in Yokohama, Japan. (Courtesy of Dale Duncan)

Kinnick High School student Elizabeth Duncan plays in the snow Saturday with her dog Kai at Negishi Base. This was the first snow of the year for the small Navy housing area in Yokohama, Japan. (Courtesy of Dale Duncan) 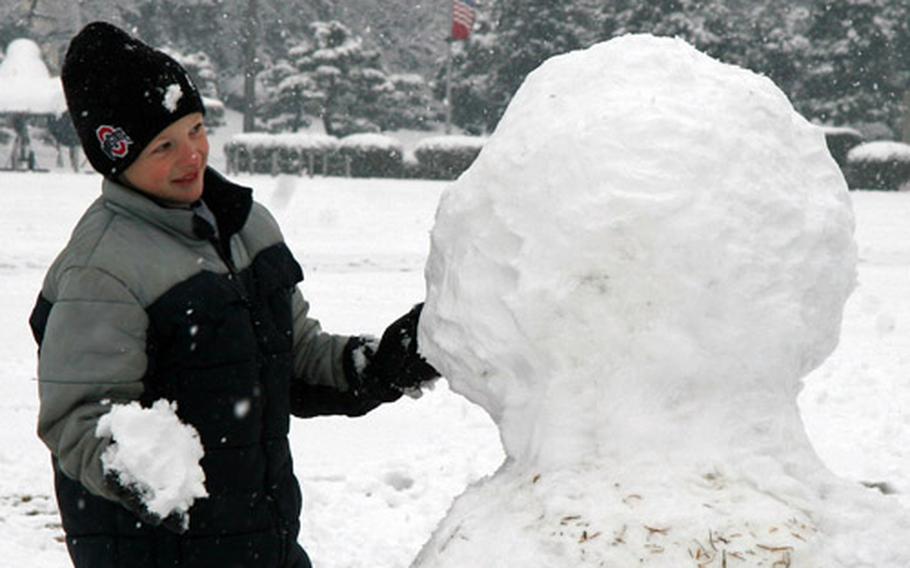 The snow still was falling Saturday at Naval Air Facility Atsugi, but Hunter Groce, 8, already was fattening up a snowman in the middle of Reid Field. (Matthew Schwarz / U.S. Navy) 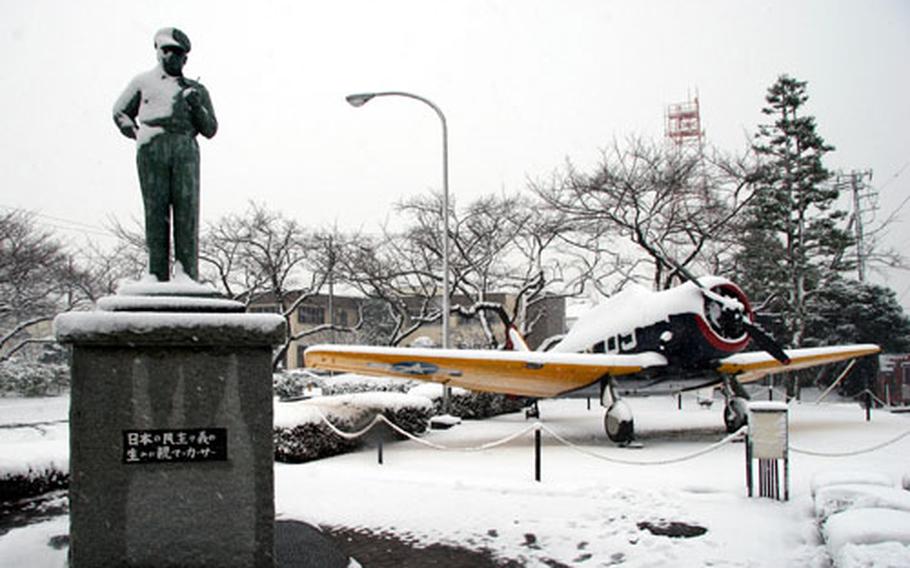 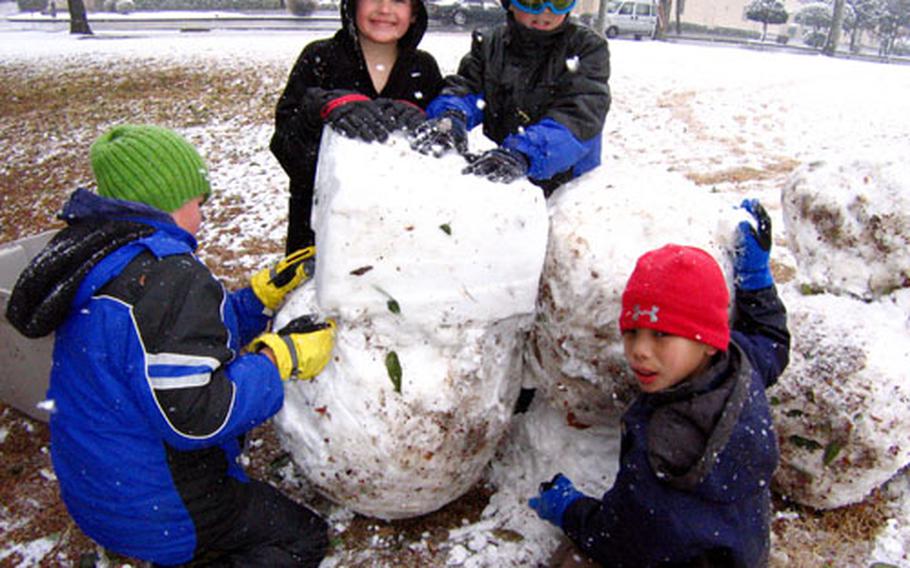 From left, Christian Guzman, 9, Mathew Nothstine, 8, Greg Kunz, 10, and Maxwell Lester, 11, put together a snow fort Saturday near the Kanto Lodge at Yokota Air Base, Japan. (Courtesy of Scott Champion) 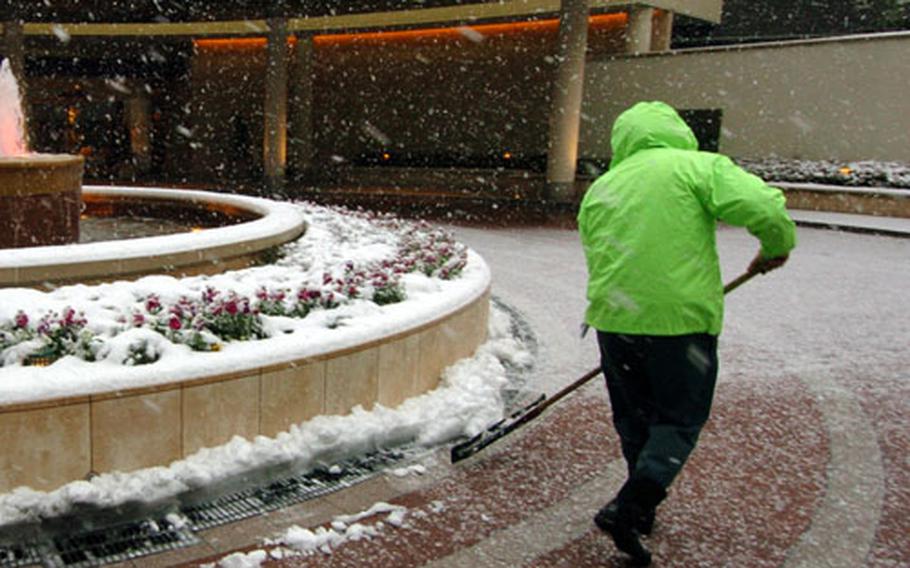 Workers try to clean up a round-about at the New Sanno Hotel courtyard on Saturday after the Tokyo area’s first snowfall of the year. (Matthew Schwarz / U.S. Navy)

YOKOTA AIR BASE, Japan &#8212; That winter wonderland finally arrived in the Tokyo area.

While northern and western Japan have been buried by record snowfall amounts since December, the Kanto Plain has been sunny, cold and dry &#8212; until Saturday.

Up to 4 inches fell on U.S. military bases in the region, coating vehicles and bringing kids outside by the dozens for sledding and snowball fights. And more snow was possible Sunday, forecasters said.

A few high school athletic matches were called off. But because it wasn&#8217;t a regular workday, the season&#8217;s first snow had little impact on operations at Yokota, Camp Fuji, Atsugi Naval Air Station, Camp Zama and Yokosuka Naval Base. Authorities reported no accidents or closures and most roads were relatively clear &#8212; not quite cold enough for the precipitation to stick and cause problems.

&#8220;We haven&#8217;t heard about any disruptions,&#8221; said Tech. Sgt. Arnold Ascano, lead meteorologist for Yokota&#8217;s 20th Operational Weather Squadron. &#8220;The flights here were still a go. Visibility was restricted, but most of the planes that come and go were able to meet the required minimums to take off and land.&#8221;

The snow had ended by Saturday night, with most bases receiving at least 2 inches. Ascano said Yokosuka, which usually is a little warmer than the other installations, probably got no more than an inch.

One inch, two inches or more, it was enough for base residents to get out and play.

In an open field near the Sakura Shell on Yokota&#8217;s east side, dozens of children hopped on sleds and raced up and down a big hill. Others built snowmen and constructed wintry forts. Workers at the New Sanno Hotel military resort in downtown Tokyo shoveled drives and walks; at Atsugi, Zama and Yokosuka, snowmen grew and snowballs flew.

Ascano said there&#8217;s a scientific explanation for why the Kanto Plain has been dry while so many other parts of Japan got inundated with snow.

&#8220;It&#8217;s all about topography,&#8221; he said. &#8220;Misawa and Hokkaido up north and the western area around Niigata are open to the Sea of Japan, which is where the weather comes in for the most part. Every system that comes in pretty much guarantees they&#8217;ll get hit.

&#8220;Here, we have the Japanese Alps to our west. They pretty much block the weather transitioning through our area. That&#8217;s why we haven&#8217;t really had any major snowstorms. &#8230; They don&#8217;t disintegrate, but the mountains have a tendency to block the systems and move them to the northeast instead of through the Kanto Plain.&#8221;

The scenario had a chance to repeat itself Sunday, he said.

A wavering frontal system to the south was expected to bring the possibility of more snow showers in the afternoon, with another 1-2 inches forecast for most Tokyo-area bases and a trace for Yokosuka.