Snow, ice no match for Grafenwöhr soldiers training for Afghanistan 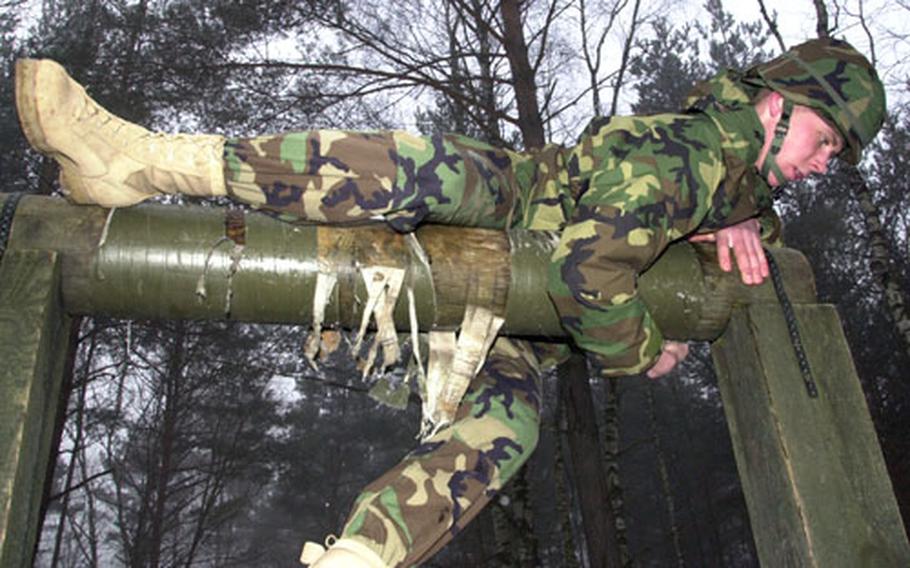 A 191st Ordinance Battalion soldier crawls along a rope on the obstacle course at Grafenwöhr. (Seth Robson / S&S)

GRAFENW&#214;HR, Germany &#8212; Soldiers from the 1st Cargo Transfer Company, 191st Ordnance Battalion, probably felt like penguins as they slid through the snow on their bellies while attempting to negotiate an icy obstacle course Thursday.

The low-crawl obstacle, in which soldiers slithered their way under a grid of barbed wire, was one of 11 obstacles soldiers had to negotiate to conquer the course at Grafenw&#246;hr&#8217;s Noncommissioned Officer Academy.

Capt. Curtis Johnson, 39, of Coon Rapids, Minn., said the training was routine but that it was also part of 2nd Platoon&#8217;s preparation for deployment to Bagram Air Base, Afghanistan, in June.

Temperatures were below freezing as the 175 soldiers arrived at the obstacle course after a pre-dawn bus ride from their home base at Kaiserslautern.

A team of soldiers had arrived the day before and dug some of the obstacles out of the snow, de-iced others and tried to break up hard-packed sand around them to make for softer landings, Johnson said. However, by the time the training started, the ground around the obstacles had refrozen and it was rock-hard.

Seven out of 18 obstacles on the course were declared off-limits because they were too dangerous in the icy conditions, Johnson said.

Some of the toughest obstacles involved &#8220;belly rolls&#8221; over moving logs suspended about 8 feet off the ground. Soldiers who tried to take on the obstacles single-handedly mostly ended up hanging helplessly like tree sloths.

The obstacle course reminded cargo specialist Pvt. Michael Albawach, 22, of &#8220;playing in my treehouse when I was a kid.&#8221;

However, when the Chicago native came to an obstacle that involved hanging upside down while negotiating a rope between two poles, he had a nasty flashback. Three months earlier, in basic training, Albawach was rushing to complete the high-rope section when he fell, he said.

&#8220;I had a stinger in my spine and had to go to the hospital, and I was off for three weeks,&#8221; said the soldier, who moved slowly and deliberately along the ropes, like a koala searching for eucalyptus leaves on a tall gum tree.

Johnson said many of the soldiers were fresh out of basic training and running the obstacle course would build confidence that would serve them well downrange.

&#8220;When you are downrange, you are going through a lot of different things. If they are on a convoy and they get hit, they will be running through different types of obstacles,&#8221; he said.

When 2nd Platoon gets back to Kaiserslautern, it will head to a mock Forward Operating Base at Panzer Casern to spend two weeks living in the sort of environment members are likely to face in Afghanistan, he said.