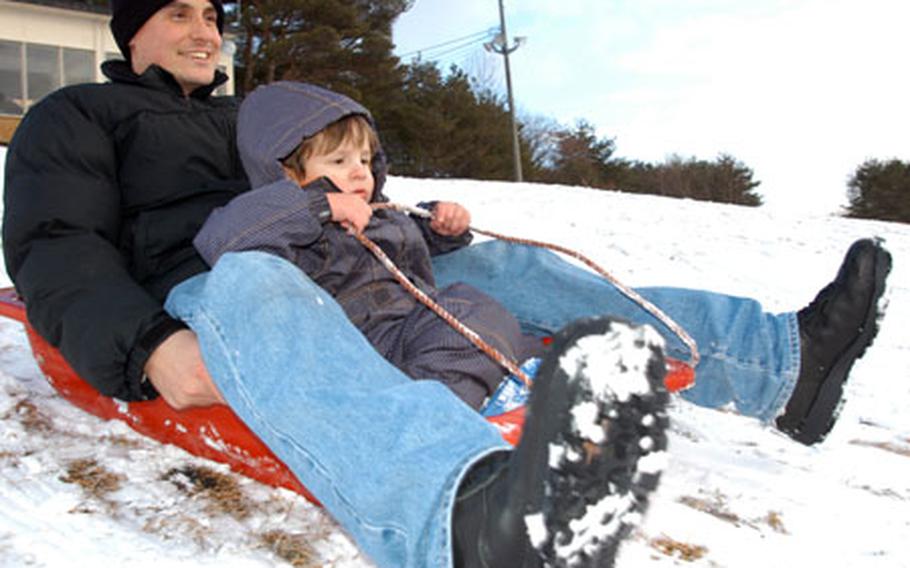 MISAWA AIR BASE, Japan &#8212; The scrape of snow shovels. The rumble of snowplows. The crunch of boots on fresh powder.

Typical sounds for a typical January morning in Misawa, after 3 inches of snow fell overnight Thursday.

But this winter has been anything but normal, considering average January snowfall in Misawa is 39.7 inches. After the most recent dusting, this month&#8217;s inch count so far is 11 inches.

With warmer-than-average temperatures this winter, Misawa is on pace for its lowest snowfall total since 1948-49, when 30.8 inches were recorded. This winter&#8217;s accumulation to date has been close to 29 inches, according to forecasters with the 35th Operations Squadron weather flight. After 1948-49, the stingiest winter for snowfall was 1989-90&#8217;s 55 inches. The average annual snowfall in Misawa is 125 inches, with last year topping that by 11 inches.

Old-timers, such as retired Air Force Chief Master Sgt. Herman Tinnirella, said they&#8217;ve never seen a winter quite like this one.

He said early November snows used to be typical in Misawa, with flakes sticking on the ground through March.

But military weather forecasters caution this year&#8217;s tame winter could turn on a snowflake &#8212; and they aren&#8217;t making any predictions.

&#8220;It could &#8230; start hammering us the rest of the season,&#8221; said Tech. Sgt. Jason Smith, noncommissioned officer in charge of the 35th Operations Support Squadron weather flight.

Civilian forecaster Dave Driskell, also with the weather flight, notes that the 2004-05 season began exactly like this winter, with 0.4 inches in November and 13.8 inches in December.

As of Friday, no significant cool-downs or big snow storms were in the 10-day forecast, Driskell said.

It&#8217;s mild winter in Misawa as well as the rest of Japan , according to U.S. and Japanese forecasters. They blame the weather pattern in part on El Ni&#241;o, a major warming of Pacific equatorial waters that occurs every three to seven years.

&#8220;A weak El Ni&#241;o event is causing warmer sea surface temperatures throughout the Pacific this year,&#8221; Driskell said. &#8220;The cold air that we normally see this time of year is located further north, so much of the precipitation we have received this winter is in the form of rain.&#8221;

Nope, Driskell says, because there are too many variables.

The scant snowfall and warmer temperatures at Misawa have been a boon and a bust to Air Force budgets so far this season, and a bit of a nuisance to eager cross-country skiers.

Snow removal costs are down compared to this time last year &#8220;due to fewer hours of operation and costs of repairs, fuel and other consumables,&#8221; Merlin Miller, deputy civil engineer for 35th Civil Engineer Squadron, stated in a written response to a Stars and Stripes query.

Outdoor Recreation, on the other hand, has taken a hit in ski and snowboard equipment rentals and ski trip participation, said Alice Rancap, rental center manager.

Twenty-one instructors are getting certified this week to teach beginner ski and snowboard lessons through Outdoor Recreation for the remainder of the season, Furqueron said.

Lack of snow prompted the 35th Services Squadron to postpone its Customer Appreciation Winter Fest on Jan. 13, but base officials said they hope to reschedule it if more snow falls.

Adults and kids took advantage of Thursday night&#8217;s 3-inch snowfall by sledding behind the base ski lodge Friday afternoon.

Petty Officer 1st Class Gary Rose and 3-year-old Isaac picked up enough speed to get down the hill, but Gary Rose said the conditions could be better. The Roses are spending their first winter at Misawa after moving from Florida .