Sniffing out trouble in Iraq 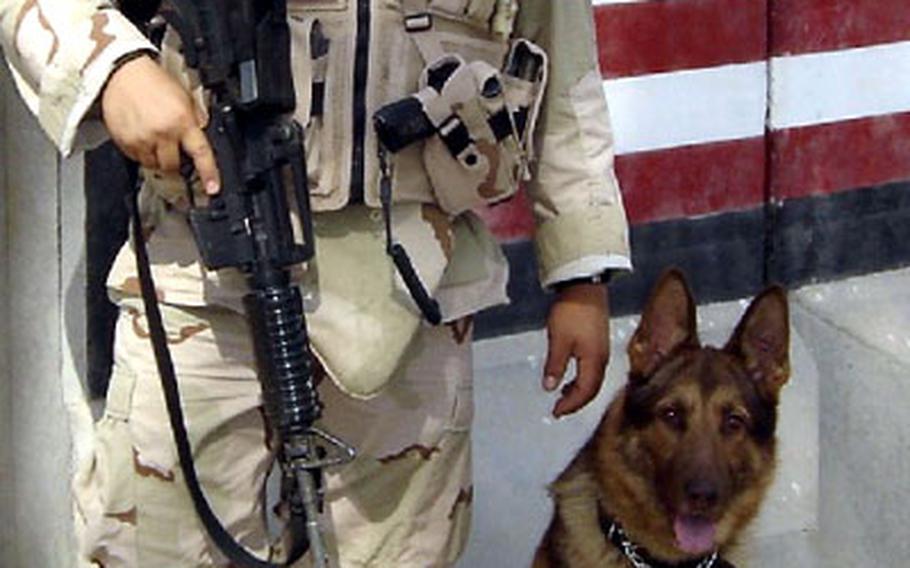 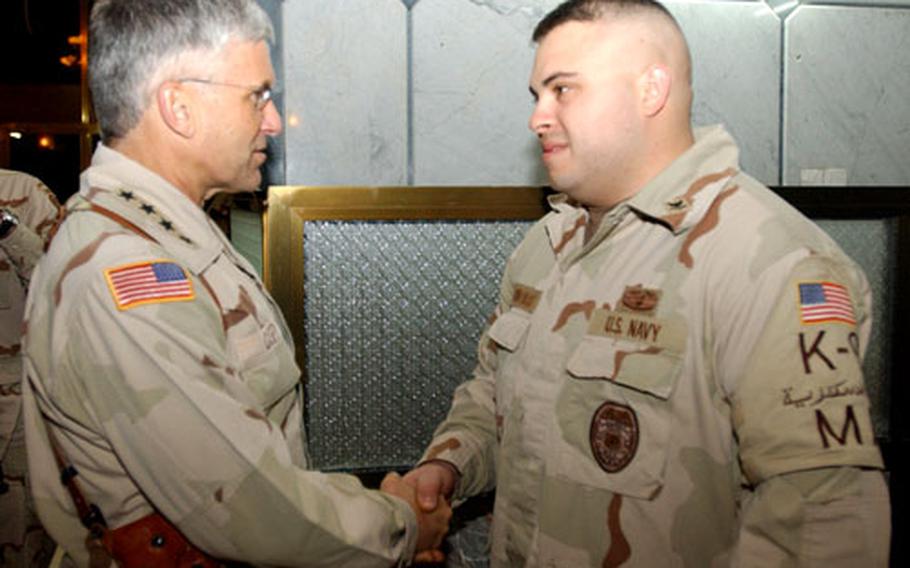 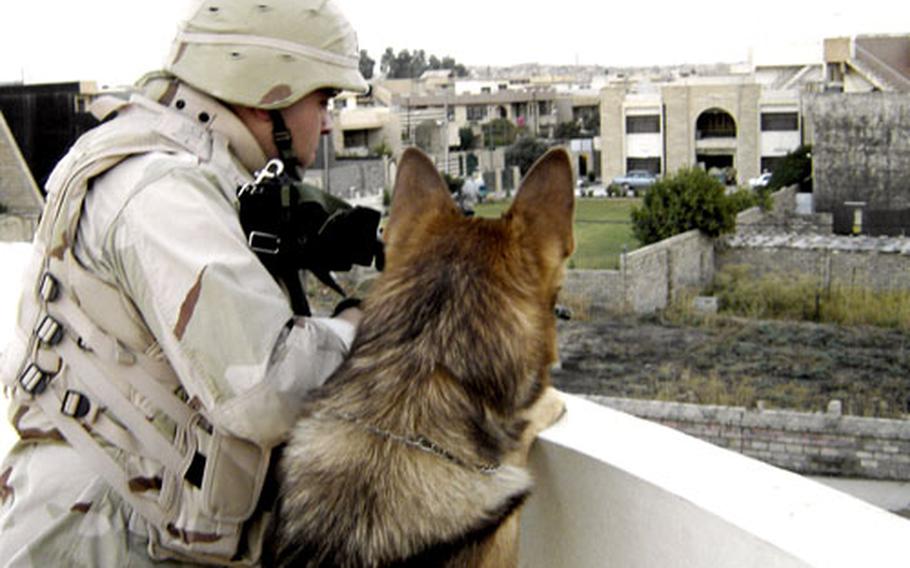 Anthony Gonzales and his military working dog, Ben, stand on the roof of a building, providing security after a suicide vehicle exploded a Stryker. Shortly after this photo was taken, a rocket-propelled grenade exploded near Ben while he was running in a field. The two were trapped in a firefight behind a small wall in Mosul, Iraq. (Courtesy of Anthony Gonzales)

For his actions during seven months supporting combat units in Iraq, Gonzales &#8212; aided by his working dog, Ben &#8212; was promoted to E-6 under a special Navy advancement program that advances sailors for &#8220;uncommon valor&#8221; while serving in combat.

&#8220;He is truly deserving of this promotion and the U.S. Navy will benefit greatly from his service,&#8221; reads the promotion citation, followed by a handwritten note from the colonel who signed off on it: &#8220;Well deserved.&#8221;

Gonzales was an aircraft mechanic on a Marine base in Hawaii on Sept 11, 2001. When all the Marines left for war, Gonzales was left behind with a bunch of engines, he recalled.

He switched rates, became a dog handler and eventually arrived in Atsugi. When the kennel master asked for volunteers to augment Army dog handlers in the Middle East, he was the first to raise his hand.

Ben proved worth it. He found 14 insurgents, 17 rifles, more than 1,000 rounds, a rocket-propelled grenade and a bomb-making kit during the deployment. But over two days in October, the two faced their most difficult challenges, which helped lead to Gonzales&#8217; battlefield promotion.

On Oct. 2, amid rising pre-election violence in Iraq, Gonzales and Ben were squeezed into a Stryker in Mosul when an explosion shook them: An IED had hit their vehicle.

Their damaged vehicle chased and caught three suspect vehicles and Ben was called to investigate, according to the promotion certificate Gonzales later received. The dog found an improvised explosive-making kit and helped capture several insurgents.

The next day a suicide vehicle slammed into a Stryker in another convoy and gutted it. A gunbattle ensued.

Gonzales&#8217; vehicle was rerouted to help. Ben and Gonzales spent nine hours on a rooftop until nearby snipers were stopped.

After the ordeal, Gonzales took Ben out to relax. He removed the leash and Ben ran through a field. A rocket-propelled grenade flew over his head, exploding a short distance away. Under gunfire, Gonzales raced out, called the dog and they ran behind a wall vibrating from the barrage of bullets hitting its other side.

Gonzales said he didn&#8217;t hesitate from saving the dog.

Throughout, the sailor watched for signs of stress from his 4-year-old partner. Small-arms fire barely bothered Ben, but he hated the deafening sounds of mortars. In the little trailer they shared at their forward operating base in Mosul, Ben would hop into Gonzales&#8217; bed at night and burrow under him during explosions. &#8220;He&#8217;s just like a little kid,&#8221; Gonzales said.

Weeks later, with the elections behind them, Gonzales&#8217; unit put him in for the combat meritorious advancement program.

When an admiral from the Multi-National Force-Iraq headquarters visited, Gonzales asked about the promotion. Weeks later, the admiral called and addressed him as &#8220;MA1,&#8221; petty officer first class, his new elevated rank. He said the chief of naval operations himself selected the sailor for promotion.

The admiral said someone else would be there the next day to congratulate him. He turned out to be Gen. George Casey, the top military official in Iraq.

The sailor also walked away from Iraq with an Army Commendation Medal on its way, a Combat Action ribbon from the Navy and a special medal he wears hidden on his Navy uniform: the Army&#8217;s new Combat Action Badge.

Gonzales and Ben since have returned to Atsugi. Both are pretty well-recovered, Gonzales said, adding that it was harrowing but he&#8217;s ready to go back.