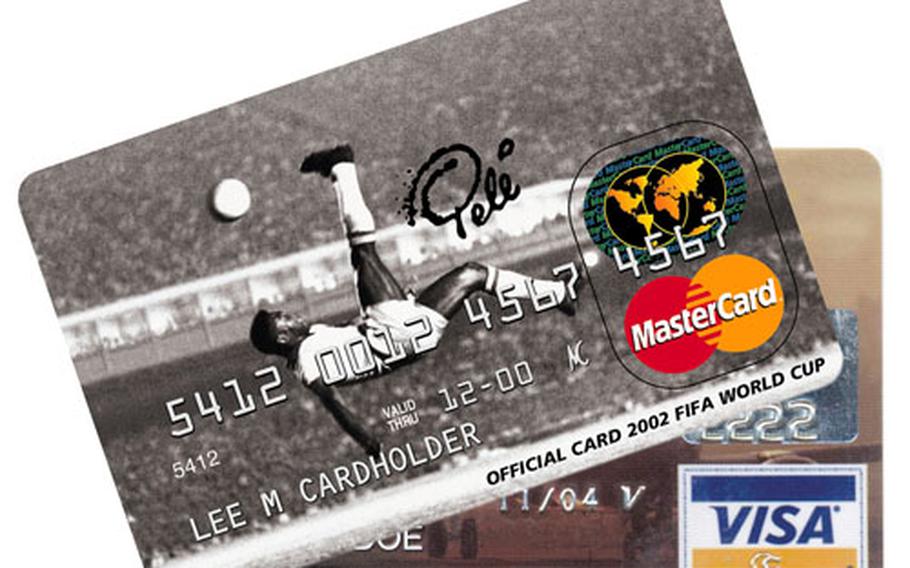 Editor&rsquo;s Note: A correction to this story was issued Aug. 14. The article below has been amended to include the corrected information.

When she checked her online credit card statement, the amount on her credit-card bill was significantly higher than the final purchase price, said Burke, a Department of Defense Dependents Schools teacher at Neubr&uuml;cke Elementary School near Baumholder. When she subtracted what was supposed to be the total purchase price from the amount on her Chase Visa credit card bill, she found the statement price was 3 percent higher.

Initially, she suspected the merchant. But the merchant had been &ldquo;so thorough&rdquo; Burke said, walking her through the currency conversion from Turkish lira to dollars, even copying the bank transactions for her, showing her each charge and the exact total.

When she contacted her credit card company, a service representative told her the difference was a bank fee, not merchant deception. JPMorgan Chase & Co., her credit-card issuer, added a 3 percent fee.

The rug purchase wasn&rsquo;t the only such incident. When she stayed at a Sheraton hotel near the Frankfurt International Airport, what was supposed to be a 129 euro per night credit card charge showed up again 3 percent higher, the difference a $4.68 &ldquo;exchange rate adjustment&rdquo; by the credit card company.

Exchange rate adjustment, foreign transaction fee, currency conversion fee &mdash; all are terms for the same fee some U.S. banks and credit-card issuers have been charging for overseas purchases for perhaps 10 years.

Of the 3 percent Burke was charged in addition to her Turkish carpet purchase, 1 percent goes to Visa International for the cost of actually providing her credit card company the foreign currency that went to pay the merchant. The remaining 2 percent was simply a fee added by Chase, according to credit card experts.

JPMorgan Chase & Co. did not respond to repeated queries for information by deadline.

The additional fees aren&rsquo;t listed largely due to U.S. bank deregulation, according to Robert Manning, author of &ldquo;Credit Card Nation,&rdquo; about Americans&rsquo; use of credit. Over the last decade, nationally chartered banks, which can be regulated only by Congress, bought up more-tightly regulated regional banks, said Manning, who is also director of the Center for Consumer Financial Services at Rochester Institute of Technology.

Credit card issuers used to disclose the foreign currency/dollar exchange rate including any added fees, but they stopped, asserting it was no longer required, he said.

After Visa or MasterCard has passed on the 1 percent fee for foreign currency to the banks, the bank now has a choice, Manning said: &ldquo;It can charge the customer zero and absorb the fee. It can ... recover the fee. Or it can get really greedy and charge 2 percent.&rdquo;

Representatives of Visa International and MasterCard did not respond to repeated queries for information by deadline.

Because the fee is relatively small, Burke didn&rsquo;t notice it until she made a large purchase, &ldquo;and then it was so glaring!&rdquo; she said. &ldquo;I assumed I hadn&rsquo;t read the fine print&rdquo; &mdash; only to find out there wasn&rsquo;t any.

In July, major banks and credit card issuers including Chase agreed to pay $332 million to settle a class-action suit charging that they&rsquo;d concealed foreign transaction fees back to 1996. While commercial banks and credit card issuers involved, such as Chase, MasterCard, Visa International and others, admit no wrongdoing, they have agreed to pay consumers such as Burke a refund, according to attorneys at the law firms who brought the suit.

(Among commercial banks, CapitalOne is the notable exception in that it doesn&rsquo;t charge the foreign fees.)

The deal &mdash; scheduled for final review Sept. 11 by a New York Federal Court &mdash; may put hundreds or thousands of dollars into the pockets of individual consumers, and the fees are a hot topic for overseas Americans. But it may not end the fees.

Hidden fee&ldquo;What bothered me was that [the foreign transaction fee] was hidden,&rdquo; not listed as a separate fee on her statement, Burke said. &ldquo;The first thing I thought was, &lsquo;A lot of people who are military have no idea,&rsquo;&rdquo; she said. What about all the people who use the economy to make a lot of credit card purchases? she wondered.

Francis X. Ryan, a logistics management specialist for the 5th Signal Command who has been in Germany for 18 years, is concerned about how hard will it be to document a decade&rsquo;s worth of transactions.

&ldquo;What are they going to take for documentation?&rdquo; Ryan asked.

&ldquo;They&rsquo;re making money off us so many different ways,&rdquo; Burke said.

It is not clear whether the settlement of the class-action lawsuit against major credit-card companies over the charging of undisclosed currency conversion fees will affect banking policies at institutions administered by the Defense Financial and Accounting Services.

DFAS supervises the Overseas Banking Program, including the Department of Defense Community Bank, and credit unions. DFAS officials in Arlington, Va., did not respond to repeated queries for information on its fee policy by deadline.

It appears, though, that DOD servicemembers and civilians may be able to avoid the fees by using credit and debit cards from DOD-affiliated banks and credit unions.

Officials at some DOD-affiliated institutions say that while they do pass on the 1 percent MasterCharge and Visa currency conversion fee, they don&rsquo;t add foreign transaction fees. They say their banks and credit unions are not directly involved in the settlement.

USAA passes on the 1 percent fee charged by Visa, MasterCard and American Express, but it does not impose any additional surcharge or fees for itself on foreign credit or debit transactions, Dione Martin, USAA spokeswoman, stated in an e-mail. Formed by military officers in 1922 as an insurance company, Reston, Va.-based USAA now is a financial services giant serving military members and their families.

In addition, Martin wrote, USAA automatically refunds up to $15 per month to customers using other banks&rsquo; ATMs for domestic or international cash withdrawals.