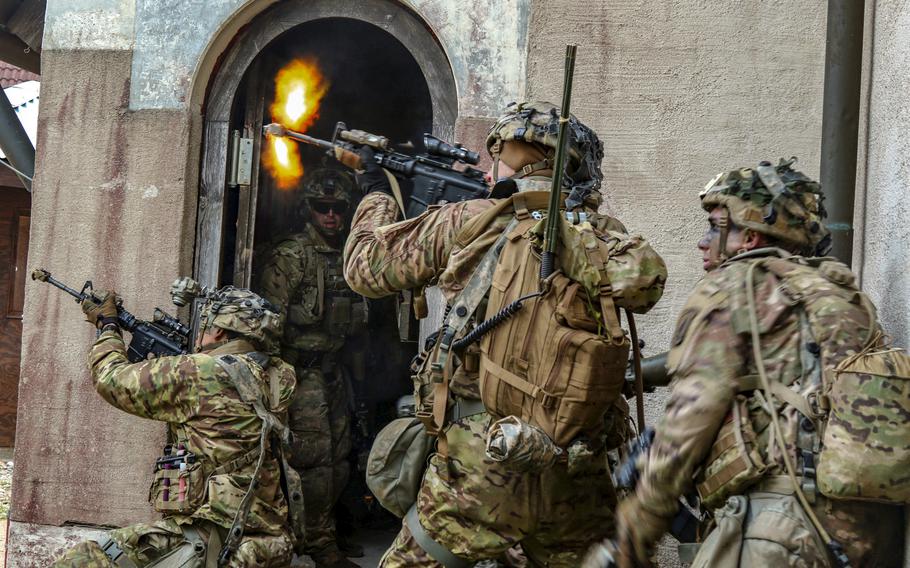 U.S. soldiers with the 2nd Battalion, 503rd Infantry Regiment, during exercise Saber Junction at Hohenfels training area, Germany, Sept. 26, 2018. A new Army strategy calls for a faster force that will be subjected to more unpredictable mobilizations to ensure the service can quickly mobilize for a major war. (Gabrielle Weaver/U.S. Army)

The Army on Thursday released its vision for the next 10 years and the focus reflects areas of emphasis for Defense Secretary Jim Mattis — building combat readiness and emphasizing great power competition over the types of counterterrorism missions that have consumed the military in the Middle East and Afghanistan.

“Army units must be able to alert, mobilize, and rapidly deploy into contested environments and operate effectively anywhere in the world,” said the document, dubbed “The Army Strategy” and released Thursday by Army Chief of Staff Gen. Mark Milley and Army Secretary Mark Esper.

A key part of the effort is Mattis’ Dynamic Force Employment concept, which requires the services to be less predictable in how they deploy and carry out missions worldwide.

In the case of the Navy, that has resulted in a shift away from traditional six-month deployments to a flexible system that can involve shorter but more frequent stints at sea.

The Army, too, says it needs to adapt.

“This will have major implications for Army force projection as we remain flexible to support global requirements and develop a lethal, agile, and resilient force posture,” the document says.

To that end, the Army will bring a more expeditionary focus to training with “emergency deployment readiness exercises” across the service all the way up to division level. The Army will also tap into pre-positioned stocks during drills to ensure weaponry and the units that use them are ready, it says.

During the past four years, the Army has been building up its stocks across Europe, ranging from ammunition to tanks and other heavy combat vehicles. The plan is to have a division’s worth of equipment in place by 2021. Units dispatched from the U.S. would be able to draw on that gear during a crisis.

The strategy shift also has implications for the Reserve.

The Army said it also will improve the Reserve component’s ability to rapidly deploy and will train and plan for national-level mobilizations.

The overall emphasis on combat readiness coincides with concerns that the military may not be able to move fast enough in the event of a conflict with Russia or China, countries that have implemented military modernization programs that American war planners say could eventually challenge the U.S.’s technological edge.

The concerns about China and Russia were highlighted Wednesday when the former head of U.S. Army Europe told a security forum in Poland that war with China was likely in the next 15 years and that allies will need to take on greater responsibility for security in Europe.

“I think in 15 years – it’s not inevitable – but it is a very strong likelihood that we will be at war with China,” said Ben Hodges, who retired as a lieutenant general last year.

“The United States does not have the capacity to do everything it has to do in Europe and in the Pacific to deal with the Chinese threat,” Hodges said, according to The Associated Press.

The Army strategy reflects such concerns, prioritizing “preparedness for war and other large-scale contingency operations.”

To achieve that, the Army wants to grow toward an end strength of more than 500,000 troops over the next several years, up from about 475,000 now. Operational units will be manned to 105 percent by the end of 2019 and non-deployable rates will be reduced to below 5 percent, the document said.

The Army also expects changes to combat units, ensuring that they have enough infantry, engineer, artillery and air defense assets to counter a high-end adversary.

Units “from brigade through corps must have the ability to conduct sustained ground and air intelligence, surveillance, and reconnaissance, electronic warfare, and cyber operations to shape the battlefield across all domains,” the Army said.

In 2022, the focus will shift to modernization, with the aim of fielding the next generation of combat vehicles, aerial platforms and weapons systems by 2028, it said.

“The Army’s central challenge is how to use finite resources to remain ready to fight tonight while simultaneously modernizing and preparing for a fundamentally different future to achieve the Army Vision,” the strategy says.