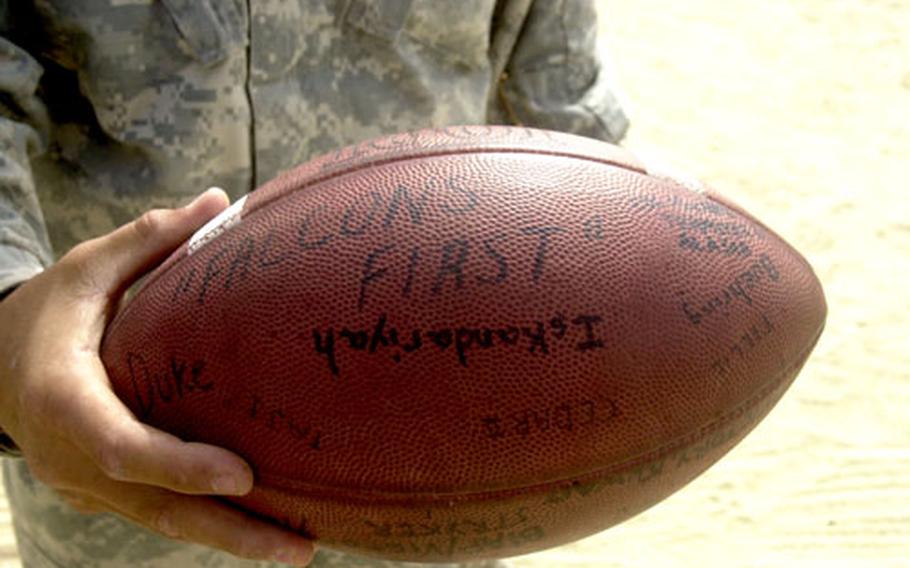 The Battery B, 1st Battalion, 77th Field Artillery Regiment “game ball” successfully made it back to Camp Arifjan, Kuwait, on Saturday after a convoy picked up retrograde equipment from Baghdad International Airport last week and returned to Arifjan. (Steve Mraz / S&S)

The Battery B, 1st Battalion, 77th Field Artillery Regiment “game ball” successfully made it back to Camp Arifjan, Kuwait, on Saturday after a convoy picked up retrograde equipment from Baghdad International Airport last week and returned to Arifjan. (Steve Mraz / S&S) 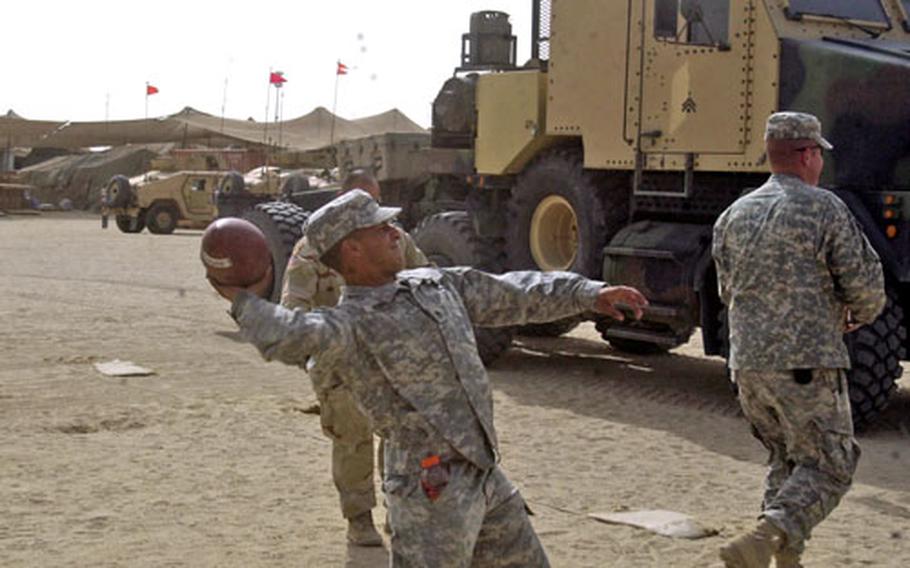 On its most recent mission, the &#8220;game ball&#8221; football of Battery B, 1st Battalion, 77th Field Artillery Regiment, out of Fort Sill, Okla., went from Camp Arifjan, Kuwait, to Baghdad International Airport and back during a nearly weeklong convoy.

The ball and, more importantly, the soldiers, completed the mission without injury or incident.

Since the battery arrived in Kuwait in October, the game ball has traveled with its Heavy Equipment Transporter convoys all over Iraq, including Fallujah, Al Asad and Iskandariyah, just to name a few places. Every time the ball visits a new locale, the name of the place is written on it.

&#8220;By the end of our year, it should be covered with all the places this battery has gone to,&#8221; said Staff Sgt. Daniel Bonilla, 26, of Columbus, Ga., who served as convoy commander on the mission to the airport and back.

The convoy left Baghdad International Airport early Friday with trailers bound for Camp Virginia, Kuwait, which it unloaded there before returning to Camp Arifjan. A number of retrograde vehicles also were hauled back to Camp Arifjan. Retrograde is the word used to describe equipment that needs to be removed from the battle zone.

As more U.S. and coalition bases are handed over to the Iraqis, more equipment is being retrograded out of Iraq, which is keeping the convoys busy with retrograde missions. The process is being referred to as the &#8220;BRAC (Base Realignment and Closure) of Iraq.&#8221;

The convoy was set to reach Convoy Support Center Scania in Iraq on Friday morning and rest before continuing on, but no room was available at Scania for the convoy. So the soldiers kept driving south. They finally made it to Camp Cedar II a few hours after sunrise and were in need of some rest.

Unfortunately, Camp Cedar II had been invaded by biting gnats that had the soldiers constantly swatting at the pests. After a few hours of rest, they were back on the road and pulling into Camp Navistar in Kuwait near the Iraqi border around nightfall.

After dropping off some trailers at Camp Virginia, Kuwait, and escorting the &#8220;white&#8221; or contracted civilian trucks in the convoy back to their headquarters, Bonilla was back at Camp Arifjan late Saturday afternoon.

Some of the field artillery soldiers who were turned into truck drivers for this deployment do not mind the change.

One of the battery&#8217;s soldiers wants to change his military occupational specialty to become a truck driver.