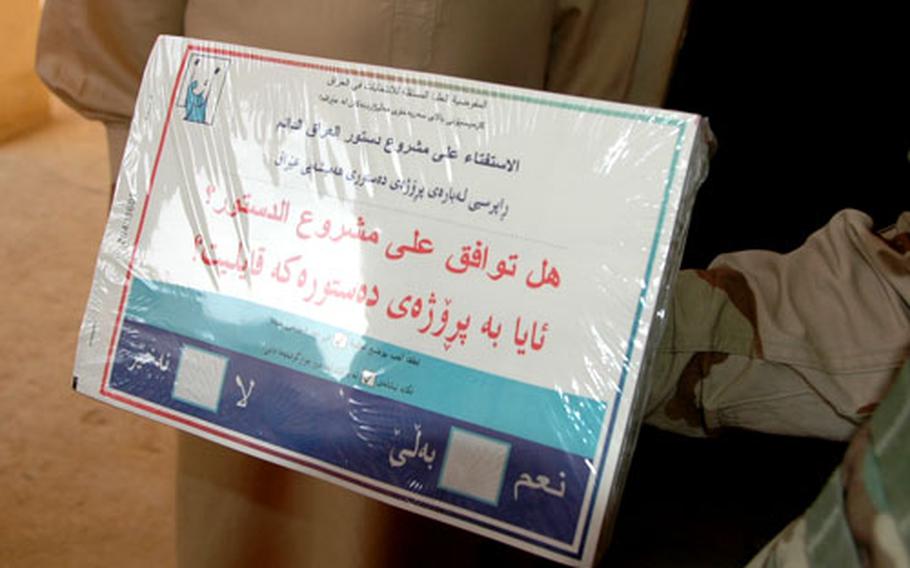 Poll workers at a polling place in Tabi show off the ballot for the national constitutional referendum. (Anita Powell / S&S)

Poll workers at a polling place in Tabi show off the ballot for the national constitutional referendum. (Anita Powell / S&S) 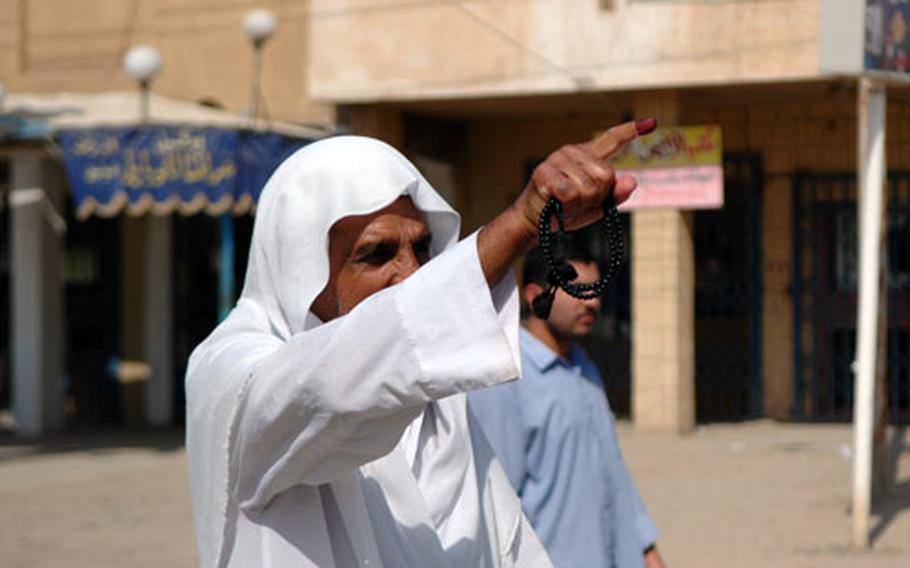 TARMIYAH, Iraq &#8212; Less than 12 hours before polls opened for Saturday&#8217;s constitutional referendum, a stressed-out, heavily smoking sheik sat in the local police station and yelled exasperatedly into the phone about election-day preparations.

One caller reported that only 20 of the expected 100 election workers had arrived from Baghdad. Others said that Iraqi guards had yet to arrive at their polling stations. Another asked for gas money to fill up cars to bring voters from far-flung regions.

Despite the rash of last-minute problems, the sheik, Saaed Jasim, remained optimistic that everything would iron itself out come morning.

And he was right: All workers fell into place and the first voters cast their ballots in Tarmiyah, a Sunni area northwest of Baghdad, just minutes after polls opened at 7 a.m. Observers in the area reported that voters at some sites showed up dressed in their finest clothes.

By midafternoon, nearly 75 percent of the area&#8217;s 48,000 voters had made an appearance at the region&#8217;s 10 polling sites, seven of which were under the surveillance of the 1st Battalion, 13th Armor Regiment, 1st Armored Division, of Fort Riley, Kan.

Several polling stations even scrambled to find extra ballots to keep up with demand.

U.S. Army officials, as agreed prior to election day, monitored election sites from afar, entrusting Iraqi authorities to guard the sites themselves.

Members of the battalion spent the eve and day of the election camped out in an abandoned building between the towns of Tarmiyah and Mushada.

As of late-afternoon, no major incidents had been reported.

Local officials said they expect most of the area&#8217;s predominantly Sunni voters to turn down the proposed constitution. Members of the Tarmiyah town council, all Sunnis, said they all planned to vote no to the measure.

The crowd that milled around Tarmiyah&#8217;s main drag Saturday afternoon also appeared hopeful and enthusiastic about the town&#8217;s first free vote in decades. Many were prevented from or unable to vote in January&#8217;s election.

&#8220;I didn&#8217;t see the constitution or have any information on it,&#8221; he said. Many Sunni leaders ordered their followers to reject the constitution because they fear it will divide the country.

When asked whether he was Sunni or Shia, he became indignant.