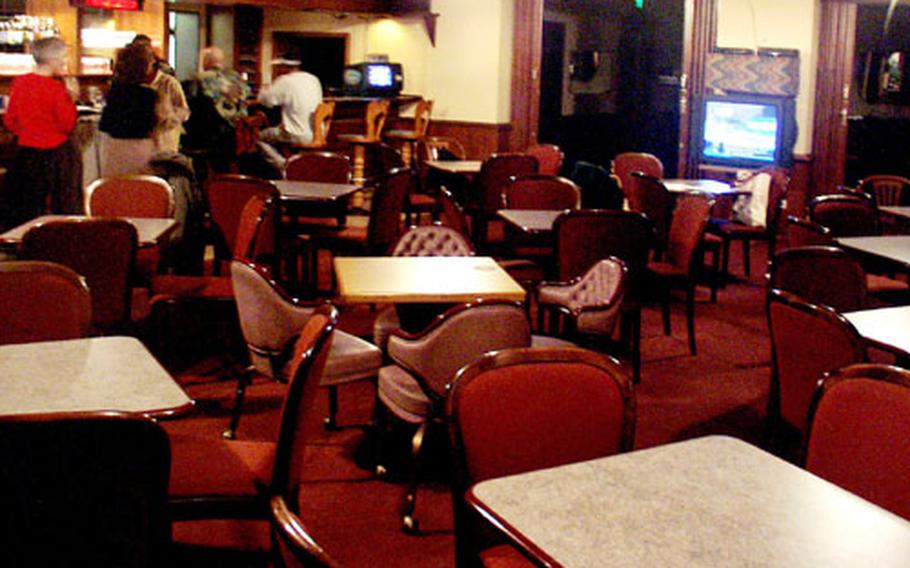 The Kelley Community Club is nearly empty during a recent Friday night happy hour, when free food is served. Business has been drastically down at this club and others after the 6th Area Support Group instituted a smoking ban from all facilities. Smokers must be at least 50 feet away from a building to smoke. (David Josar / S&S)

On a recent Friday, the bar had seven customers, despite free chicken wings and egg rolls. The turnout was a substantial drop from the dozens of regulars in attendance before the ban.

Mitchell can&#8217;t say exactly how much sales are down but said the amount is notable.

The smoking ban, which went into effect at Morale, Welfare and Recreation clubs throughout Europe on Dec. 7, prohibits smoking inside buildings and within 50 feet of a structure.

A small number of clubs have added expensive equipment in separate rooms that prevent smoke from exiting &#8212; the only exception to the prohibition.

MWR staffs in communities such as Kaiserslautern lobbied for and spent tens of thousands of dollars building &#8220;negative-pressure rooms&#8221; for people who still want to light up. The rooms, which are separate from a club&#8217;s main room, have complex ventilation systems that prevent any air from leaving, even when the entrance doors are open, which is the only way federal regulations allow smoking inside a government building.

In those places, club managers say business has not been affected.

A more stringent visitors policy implemented after the Sept. 11, 2001, attacks had more of impact on business, he said.

Since local nationals were banned without sponsors, Schwartz said business has dropped between 5 percent and 50 percent.

Although customers, club workers and MWR officials at other clubs say business has dropped, it is hard to determine whether it is because of the ban.

&#8220;Revenues are down, but it is too early to tell based on only two months data,&#8221; said Brenda McCullough, MWR director and director of community activities for the 6th Area Support Group, based in Stuttgart.

&#8220;What is related to the new policy and what is related to mission changes &#8230; we will know better in a few more months. We did expect a slight decrease initially, and then for revenues and patronage to stabilize.&#8221;

She said the drop in business might be tied to the war in Iraq, both as troops prepared to depart and then did leave.

&#8220;Ops tempo is very high right now as is in many communities, and customers are spending more time with their families,&#8221; she said.

The Stuttgart clubs are typical of most clubs on military bases throughout Europe in that no provisions were made for smokers. As a result, some former customers complain that they must go off base if they want to smoke and drink, club bands lament that crowds are down, and bartenders are losing money.

The Back Lot Club, run by MWR on Patch Barracks, home of the U.S. European Command headquarters, had been a &#8220;rocking place&#8221; until the ban, said Afab Matty, a Department of Defense finance controller who has worked on Patch for five years.

Bartenders contacted for this article did not want to be quoted but simply pointed to their tip jars. At the end of a Friday &#8212; often the busiest night of the week in Stuttgart &#8212; the jars held about $20.

Matty is also part of a band, 12 on the Meter, and although it has played at the Kelley Club, it&#8217;s not something it will do again anytime soon.

The ban on smoking in government buildings began in August 1997, when then-President Clinton signed an executive order that mandated the implementation of a smoke-free environment &#8220;&#8230; in all interior space owned, rented or leased &#8230; by the government&#8221; within a year.

MWR facilities received an exemption until December 2002. The smoke-free environment, however, did not entirely bar smoking as long as a separate section was established for smokers that would prevent the smoke from going into the general facility, such as was done in the clubs around Kaiserslautern.

The no-smoking debate is going on strong in Naples, Italy, where no provisions were made for smokers.

&#8220;There has been a big drop in business. People stay in their rooms or go straight to the clubs,&#8221; Jaclyn Harden, a storekeeper with NATO at Allied Forces South, said recently while smoking outside the Capo Landing Bar in Naples.

She said, however, she understood the point of the ban.

The ban has made some people feel excluded.

Klein was a regular at several Stuttgart-areas on-base clubs until he was forced to take a two-minute walk to smoke.