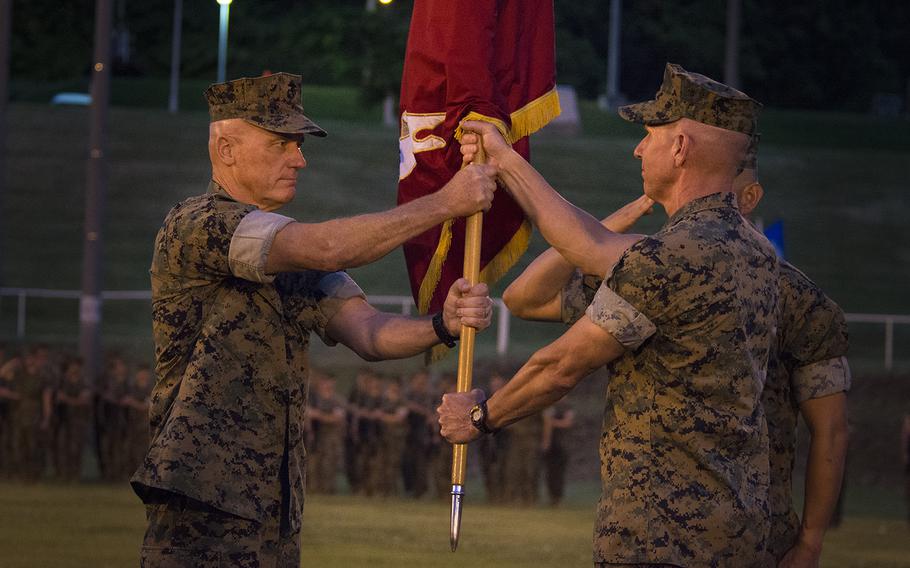 CAMP FOSTER, Okinawa — Before he headed to Washington for a new assignment, the outgoing III Marine Expeditionary Force commander left a stern warning for America’s potential adversaries in the Indo-Pacific region: do not test the U.S.-Japan alliance.

“And briefly, I would simply say, because this is always covered by the media and everyone throughout the region will see this; if you test the alliance this is what you face,” Smith said, referring to the III MEF company grade and junior staff noncommissioned officers in attendance.

“You don’t want to fight the force that stands behind me because they don’t stop; they won’t stop,” he said. “Neither will any of our partners, so that should be probably noted by anyone who’s maybe watching this later on a YouTube video.”

Smith’s tenure as III MEF commander was short. He took over from Lt. Gen. Lawrence Nicholson on Aug. 2. Terms of service in the post have generally been two to three years.

In the 10 months he held the position, Smith made changes to improve the lives of young Marines on Okinawa. In November, he loosened liberty restrictions for sergeants and below by providing an extra hour of liberty time from midnight to 1 a.m. He also relaxed liberty buddy requirements and made it easier for younger Marines to drive on the island.

Smith also had to deal with several high-profile incidents. In March, someone broke into a Marine base on Okinawa and detonated a pair of small gas canisters outside a building that houses Japanese government officials.

Then, on April 13, a sailor attached to the 3rd Marine Division fatally stabbed a Japanese woman and then killed himself, according to Okinawa police. Reverberations from the incident are still being felt on the island in the way of protests.

Smith was chosen for the post at Marine Corps headquarters due to a profound institutional knowledge of the subject matter, Marine officials said.

The change-of-command ceremony Friday was the type of formal celebration befitting three-star generals. Dignitaries and military officials poured onto Courtney’s parade grounds from all over the Indo-Pacific region. The III MEF band played and a chaplain provided an invocation.

“Both the outgoing and the incoming [commanders] are no exception,” he said, before turning his attention to Clardy, whom he has known since 1988. “There’s no better leader to come in here and pick up the baton and continue to check off General Smith’s to-do list and to continue to move the ball forward.”

“Stacy, as you assume command of III MEF, know that you have my total trust and confidence,” he said in the letter that was read aloud. “I know you will set the bar high and bring the same outstanding leadership you’ve demonstrated … throughout your career.”

Clardy comes to III MEF after serving as military deputy to the undersecretary of defense for personnel and readiness. Now on his fourth tour on the Japanese island prefecture, he previously commanded 3rd Marine Division on Okinawa from July 2013 to June 2015.

As he stood under the Camp Courtney parade ground lights, Smith extolled Clardy’s passion for the job. Clardy presented himself as a man of few words.

Then Clardy met the Okinawan media for the first time in his new role.

“This is an exciting time for me and family to come back to Okinawa,” he said. “I consider this my home. I have a deep respect for the Okinawan people and I understand the importance of Okinawa in our strategic alliances here in this [area of operations].”

Clardy said he would continue the initiatives started by Smith.

“We will respect the Okinawan spirit, their love of peace” and will continue to treat Okinawans with dignity and respect into the future, Clardy said. “I also pledge our commitment to our alliances and treaties throughout the region and particularly, our close, strong alliance with the Japanese government.”