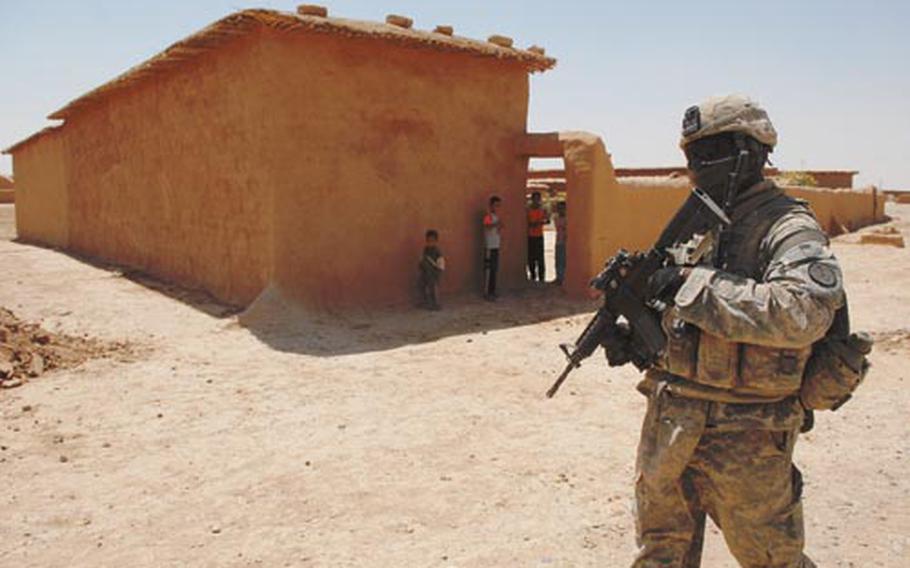 Iraqi children watch Sgt. Brandon Mines – a soldier in Troop A, 1st Squadron, 3rd Armored Cavalry Brigade – during a visit the Americans made Wednesday to Mustantiq, Iraq. Like other small towns, Mustantiq is a collection of mud homes surrounded by a waterless area with few resources. (James Warden / S&S)

Iraqi children watch Sgt. Brandon Mines – a soldier in Troop A, 1st Squadron, 3rd Armored Cavalry Brigade – during a visit the Americans made Wednesday to Mustantiq, Iraq. Like other small towns, Mustantiq is a collection of mud homes surrounded by a waterless area with few resources. (James Warden / S&S) 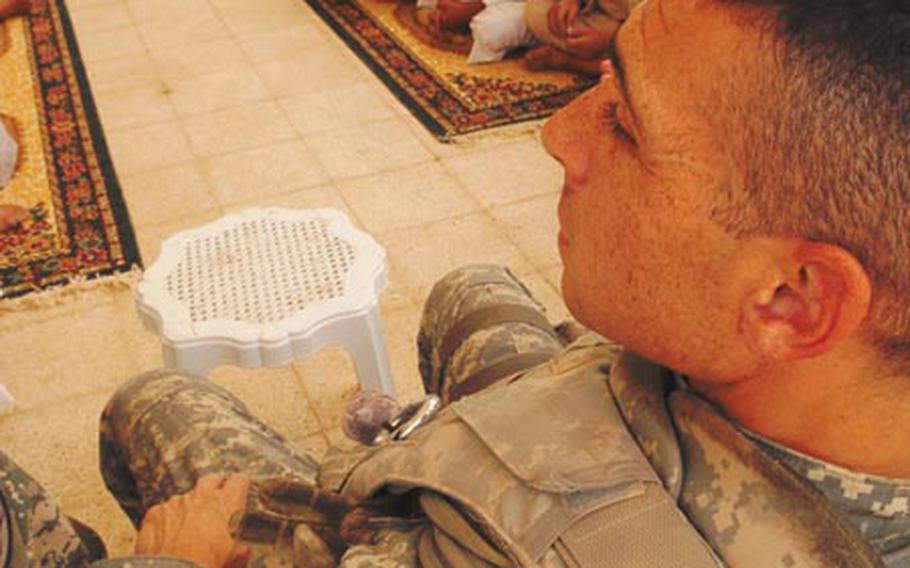 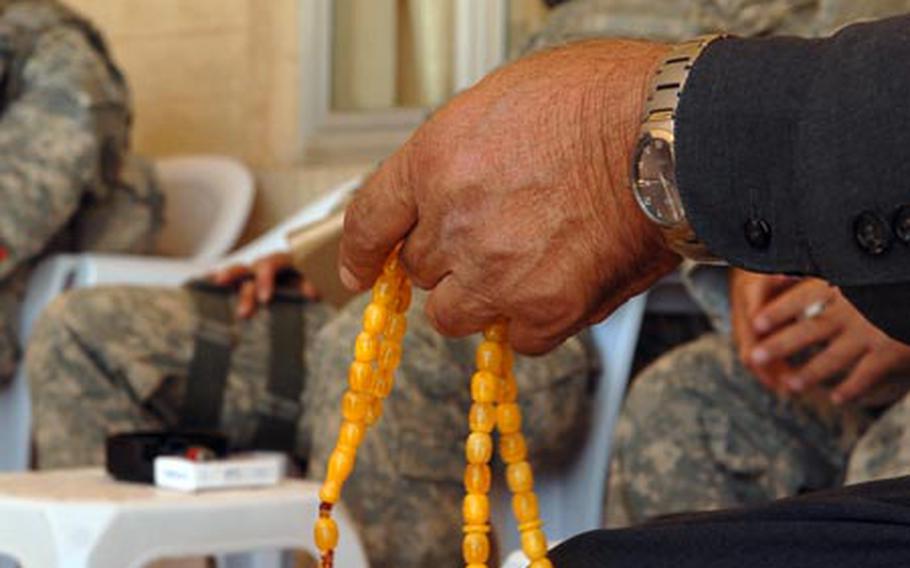 An Iraqi man fingers a string of prayer beads Wednesday in Mustantiq, Iraq, while listening to his village head tell the American soldiers about a clinic that needs renovated. Small villages like Mustantiq lack even the most basic services found in larger cities. (James Warden / S&S)

MUSTANTIQ, Iraq - Mustantiq is a small village of just a couple hundred people, not too far from Ash Shurah. It has a boys school and a girls school that attract students from even smaller villages, and it will have the only clinic west of the Tigris River in this part of Ninevah province &#8212; if it ever gets up and running again. But for the most part, Mustantiq is just one among dozens of forgettable villages in the Iraqi desert.

Yet Wednesday, a platoon of American soldiers with Troop A, 1st Squadron, 3rd Armored Cavalry Regiment and a civil affairs team visited the village.

The high-intensity fight in large cities like Mosul has attracted most of the attention in Iraq&#8217;s northern region, but soldiers say winning the battle for the open deserts and mud-hut villages west of the Tigris will be just as important to stopping the insurgency.

The destitute make up much of that insurgency, said Lt. Col. Thomas Dorame, the 1st Squadron commander, and this area is fertile ground for poverty.

Water dictates fortune here almost as much as it did when the first Mesopotamian civilizations began thousands of years ago. The most populous areas still sit within a thin strip of green land bordering the river valley. Many former Baath party members live there, as do many insurgent financiers, weapons dealers and other facilitators.

"The farther west you go, the more austere it gets," said Capt. Steve Wojdakowski, commander of Troop A.

Homes and vegetation become ever sparser. Shepherds must herd their sheep or goats between isolated patches of ankle-high shrubs. Conditions are especially bad during winters, like this most recent one, when the area doesn&#8217;t get much rainfall.

Unemployment rates here often sit as high as 75 percent, and the government must pay more to bring essential services to these outlying areas.

While the poor may have no special love for the Americans, they&#8217;re not ideologues who believe Americans should be killed at all costs, Dorame said. Yet money insurgent groups pay them to attack coalition forces can be tempting.

The Syrian border is just 100 kilometers away from some of the main cities, and foreign fighters can use the myriad small villages in between as infiltration way stations. Insurgents can move about almost invisibly through complex wadi systems big enough to hide a Humvee and its dust clouds.

Roadside-bomb cells use these wadis, or desert ravines, to stash their weapons just a few hundred meters from the main roads. Other insurgents then grab the bombs, sneak up to the road through the ravines, place the bombs and flee.

Actual combat is rare. Other than two roadside bomb attacks, Troop A hasn&#8217;t had any contact with the insurgents, Wojdakowski said.

Observation posts would be a great way to counteract this threat, but the area lacks sufficient Iraqi security forces. The Iraqi army brigade for the area has only two of the four battalions it is authorized because its other units were sent to Mosul, Wojdakowski said.

Most of the roadside bombs in the area are left along a stretch of a north-south highway that Wojdakowski calls an "Iraqi security force vacuum." By contrast, some cities have checkpoints every 100 meters and at every major intersection.

Too often, coalition forces have gone into a village, routed the insurgents, stayed awhile and then left &#8211; only to have to return later because the underlying situation in the village never improved, Dorame said.

Establishing stability and growing the economy would cause the population to turn on the fighters, he said. But that&#8217;s rarely easy. Where Americans once paid for civil works projects directly, Iraqi money now funds most of them &#8211; although American soldiers do much of the footwork in visiting the villages.

Almost all that money flows from Baghdad downward. Cities like Ash Shurah control how much the villages in their area get, said Sgt. Edward French, a soldier with Company C, 415th Civil Affairs Battalion. American soldiers must remind city officials to take care of the surrounding villages.

The Ash Shurah subdistrict alone has 63 villages, Wojdakowski said. Until recently, many of those villages hadn&#8217;t seen American troops since 2003.

The process can be slow and dispiriting. French told Rakan Abdul Wahad, a Mustantiq leader, that he planned to submit a formal proposal to renovate the clinic. The Iraqi replied only "Inshallah," or "God willing," a ubiquitous phrase that can be anything but a vote of confidence.

"You&#8217;re always welcome to come out here &#8230; but the people around here think nothing is going to happen," Wahad said bluntly.