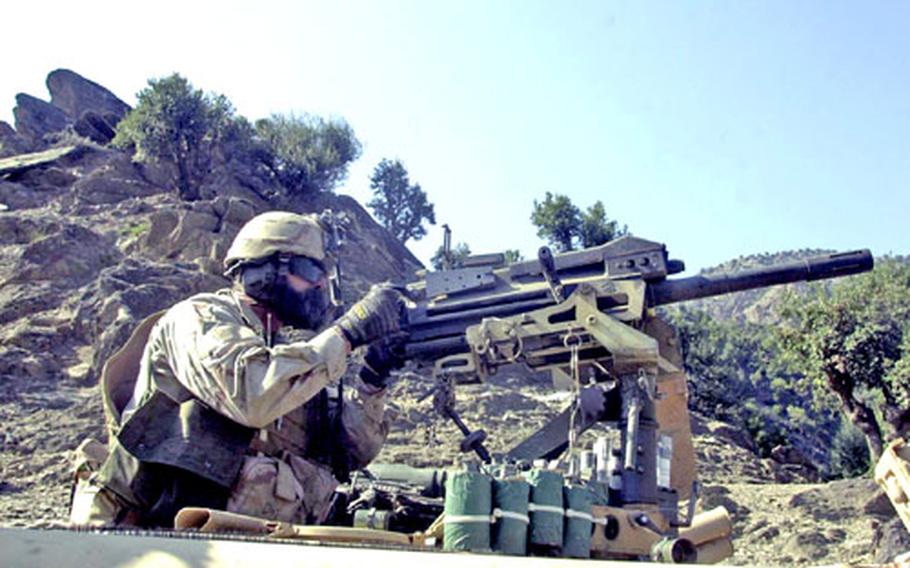 Special forces teams, not conventional units, do most of the fighting in remote areas. Here, a MK-19 gunner rakes a hillside with 40-mm grenades during fighting in the mountains of eastern Afghanistan. (Terry Boyd / S&S)

ASADABAD, Afghanistan &#8212; Fighting the war to keep the Taliban and other extremists out is an incredibly complex proposition. Conventional large-unit warfare long ago gave way to small teams working to undermine insurgent support in remote villages while fighting in the mountains.

Also participating in incursions into enemy areas are security forces attached to Provisional Reconstruction Team bases. They are mostly drawn from National Guard and Reserve units, as well as the Hawaii-based 25th Infantry Division.

Light infantry soldiers with the Fort Bragg, N.C., based 82nd Airborne Division, sent to Afghanistan to bolster security for the elections, have switched to running missions into enemy hot spots.

While Afghanistan is an unconventional war, the tactics and strategy are not new. U.S. forces are using conventional anti-insurgency tactics dating back to the Vietnam War.

One reason these tactics seem to be working is a reservoir of good will for Americans left over from the 1980s, when the U.S. government assisted rebels in defeating the Soviets, said Capt. John Wilt, 450th Civil Affairs, a reservist from Maryland who wears Ranger, Special Forces and Airborne tabs.

American troops are not in Afghanistan in overwhelming numbers, but rather integrated with Afghan forces, according to Wilt, the PRT team leader: &#8220;It&#8217;s important to put an Afghan face on it, while staying committed &#8230; to staying.&#8221;

In other parts of Afghanistan, covert teams &#8212; referred to as Operational Detachments, Alpha, or ODA teams &#8212; typically pay local powerbrokers to use their militias, which are not controlled by the central government in Kabul, to battle insurgents. In eastern Afghanistan, the 3rd Special Forces Group (Airborne) teams are relying solely on Afghan troops they trained. The new Afghan military is showing signs of maturity in capability and reliability.

However, one Special Forces officer said, Afghan soldiers remain strongly influenced by traditional family and tribal ties than any allegiances to the new military.