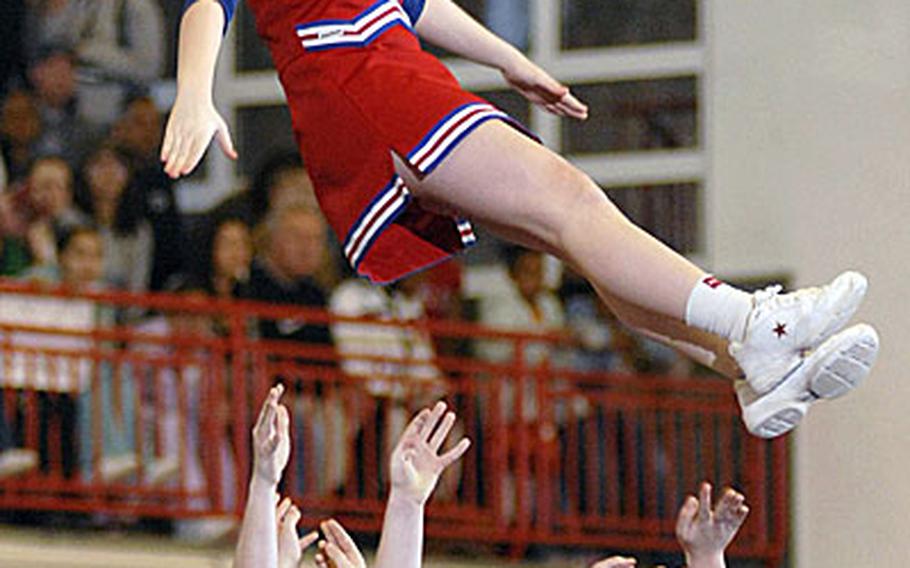 Amanda Turley, a freshman from Menwith Hill in the United Kingdom, soars into the arms of her cheerleading squad during their Division IV European Championship routine Saturday in Mannheim, Germany. Menwith Hill won their division. (Ben Bloker / S&S)

Amanda Turley, a freshman from Menwith Hill in the United Kingdom, soars into the arms of her cheerleading squad during their Division IV European Championship routine Saturday in Mannheim, Germany. Menwith Hill won their division. (Ben Bloker / S&S) 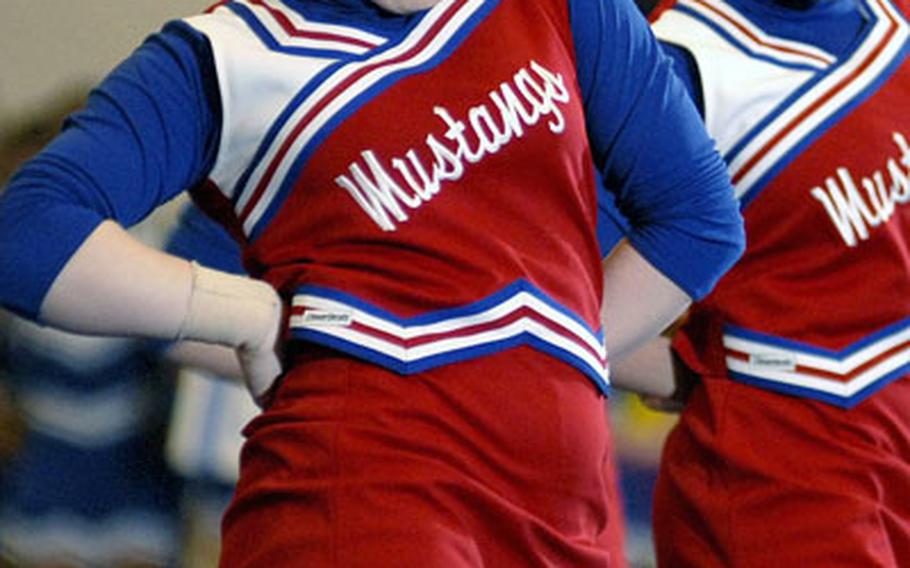 Amanda DePretoro, a junior from Menwith Hill in the United Kingdom, flanked by Jacqui Williford, winks at the crowd Saturday in Mannheim. (Ben Bloker / S&S) 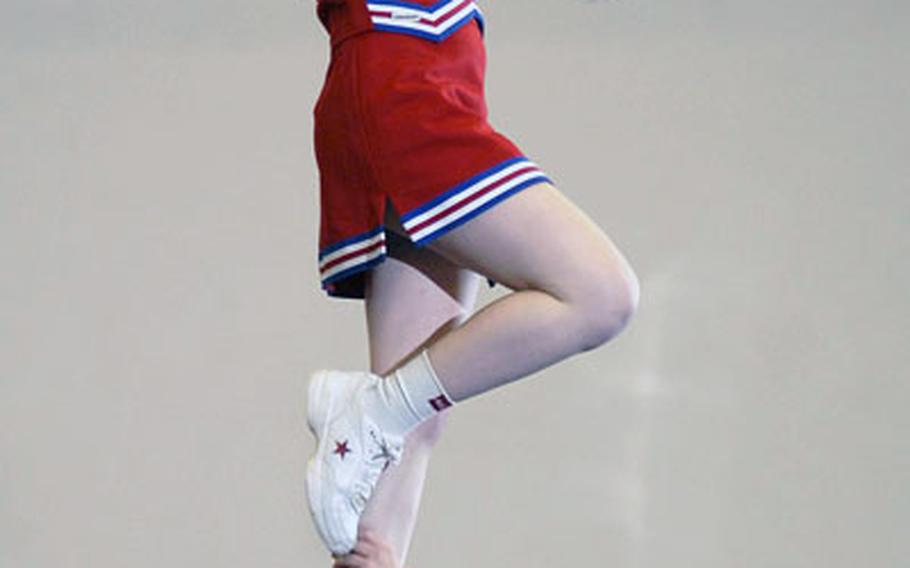 Amanda Turley, a freshman from Menwith Hill in the United Kingdom, gets a lift from her cheerleading squad during their routine Saturday in Mannheim. (Ben Bloker / S&S)

RAF MILDENHALL &#8212; In the realm of small-school athletics in the Department of Defense Dependents Schools system, Menwith Hill is often the smallest of the small, with little hope of taking home a European title.

With only about 90 students in the high school, boys basketball coach Pete Resnick said that other schools tend to regard the Mustangs as the least competitive in the league.

But this season the Mustangs have been beating those teams and excelling in other athletic areas. They capped off their season last weekend with a strong performance in the DODDS-Europe basketball tournament in Mannehim, Germany.

On Friday, the boys team lost 61-39 to Bamberg (Germany) in the championship game of the Division IV tournament.

Earlier, the girls squad played Bamberg in the consolation game of the D-IV girls tournament, taking third place with a 36-24 win.

In a triad of coups for the school, the girls cheerleading team took first in the division during competition on Saturday.

Resnick said just getting to the championship game was an achievement for Menwith Hill boys, who he said hadn&#8217;t put a team in the finals of a European tournament in recent memory.

Sophomore Greg Puccetti, the leading scorer for the Mustangs in the title game with 13 points, said Menwith Hill had its eyes on the title, but had to settle for second against a powerful Bamberg squad.

The Mustangs were the Division III-North regular season conference champions, which they won in nailbiting fashion in a two-game series with London Central earlier this year.

In that showdown, Menwith Hill lost on a Friday and had to beat London Central by more than six points the next day to take the title. With a minute to play and up five points, the Mustangs tacked on five more to win the conference title on a point-differential tiebreaker. Both teams ended with a 5-1 conference record, Resnick said.

The team saw major contributions throughout the season from Puccetti, the 6-foot-3 center and inside shooter for the Mustangs, and junior Le&#8217;Shawn Adams, who had eight points in the championship game. Both were named to the all-conference squad, and Puccetti also made the all-tournament team, Resnick said.

Resnick also gave credit to seniors and team captains Daniel Carter and Danton Moore for their contributions, and to senior Andrew Kaaihue.

Overall, Resnick said, the team was satisfied that it had gone further than any recent Menwith Hill team.