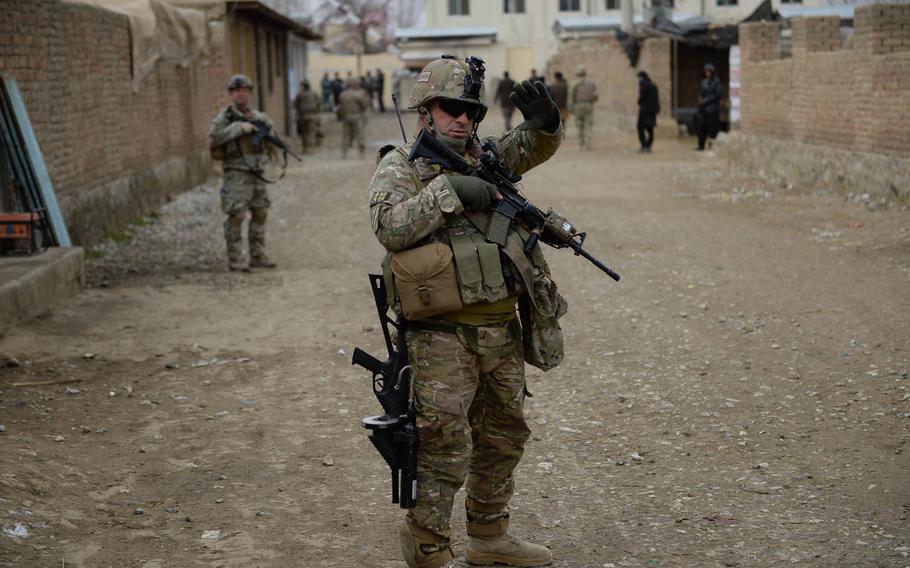 A Georgian soldier cautions Afghans in Charikar, Afghanistan, to keep their distance from a patrol on Dec. 21, 2015. Georgia is now the second largest troop contributor to the NATO-led military coalition in Afghanistan after the United States. (Heath Druzin/Stars and Stripes)

A Georgian soldier cautions Afghans in Charikar, Afghanistan, to keep their distance from a patrol on Dec. 21, 2015. Georgia is now the second largest troop contributor to the NATO-led military coalition in Afghanistan after the United States. (Heath Druzin/Stars and Stripes) 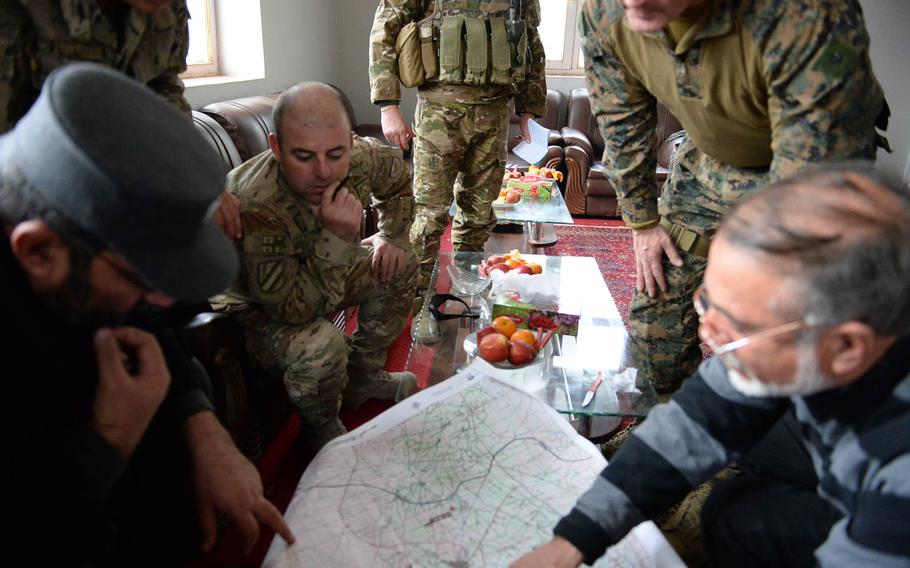 Georgian Army Lt. Col. Manuchar Babakadze, second from left, discusses security with Afghan government officials during a Dec. 21, 2015, patrol in Charikar, Afghanistan. With some major NATO allies reducing their footprint in Afghanistan, smaller nations, like Georgia, are playing a larger role in the military mission there. (Heath Druzin/Stars and Stripes) 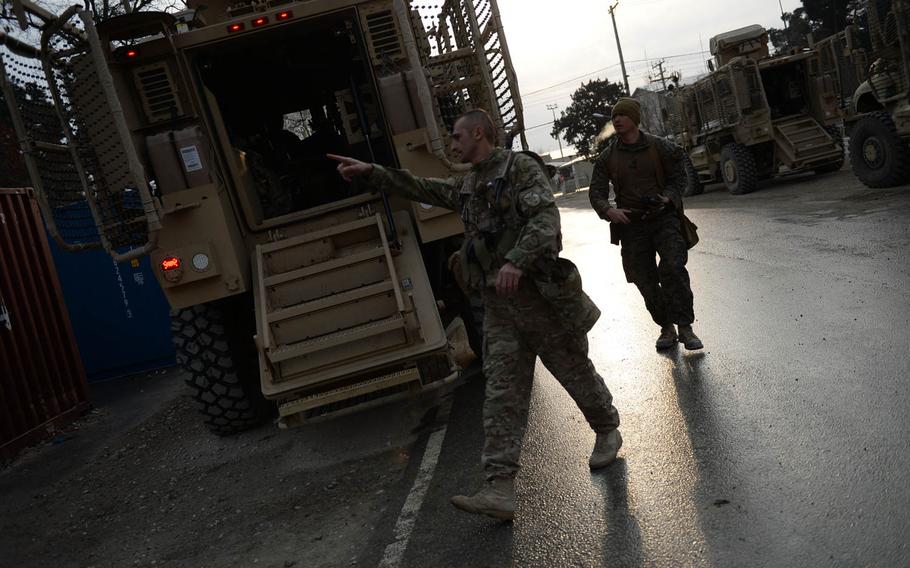 Georgian soldiers prepare for a patrol at Bagram Air Field, Afghanistan on Dec. 22, 2015. Countries like Georgia and Romania are playing a larger role in Afghanistan now that traditional NATO powers, such as Britain and France, have scaled down or ended their missions in the country. (Heath Druzin/Stars and Stripes) 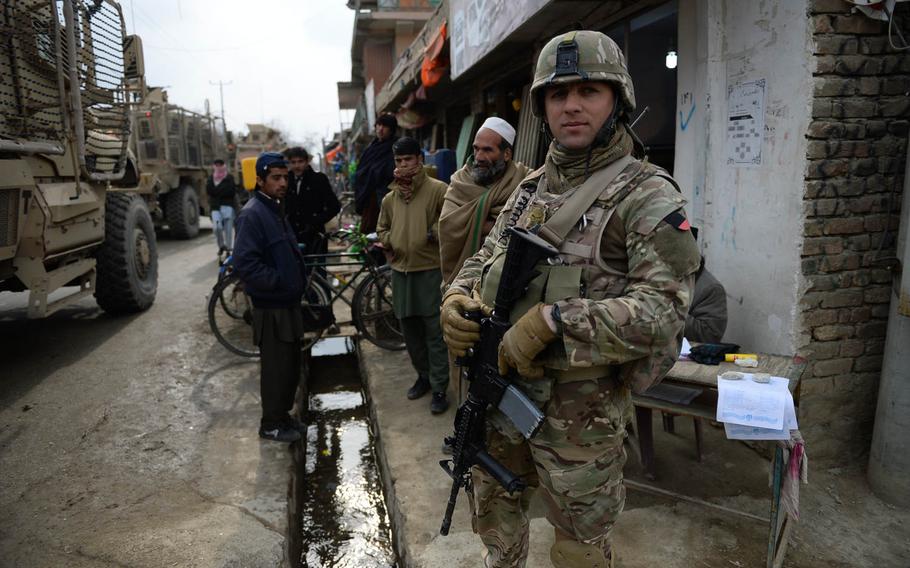 A Georgian soldiers pulls security around a military convoy during a Dec. 21, 2015, patrol in Charikar, Afghanistan. Despite having just under 5 million people, Georgia now provides the second most troops to the international military coalition in Afghanistan. (Heath Druzin/Stars and Stripes)

BAGRAM AIR FIELD, Afghanistan — The tiny country of Georgia now has the second-largest contingent of foreign troops after the U.S. in the NATO-led military mission in Afghanistan — more than Britain, Germany and Italy.

Since the U.S. and its allies reduced their force numbers in Afghanistan from 57,000 in January 2014 to the current level of 13,000, small countries — many of them former Soviet states or satellites — are providing proportionately larger shares of troops than the larger NATO countries that once provided thousands of troops.

The presence of troops from 42 countries, no matter how small the number — Iceland contributes two personnel — sends an important message to the Afghans, said German army Lt. Gen. Frank Leidenberger, who serves as chief of staff for Operation Resolute Support, as the current coalition military mission in Afghanistan is known.

“From a psychological perspective, for the Afghans, it’s important to understand this is not a bilateral or a NATO effort,” Leidenberger said. “No, the whole world community is here, and irrespective of how small the contribution, we have the flags out there and it’s always a symbol for the Afghans that the world is here for the Afghan people.”

The U.S. is still by far the largest troop contributor, with 6,800 of the roughly 13,000 troops serving with Resolute Support. Since NATO ended its combat mission in Afghanistan a year ago and drastically reduced its troop strength, some NATO powers have significantly scaled back or ended their missions, while some of the smaller nations have not.

Britain now has fewer than 500 troops in the country, down from 5,200 in January 2014, when it was the second-largest contributor after the U.S., followed by Germany and Italy.

“They make a significant contribution in terms of numbers and in terms of the risk they are willing to take doing ground defense,” he said.

It was Georgian soldiers who were on the first patrol out of the gate at Bagram Air Field on Dec. 22, less than 24 hours after a suicide bomber killed six American troops near the base.

“That’s a very sad feeling for Georgians because we lost our friends and our comrades,” said Lt. Col. Manuchar Babakadze, who leads a battalion of Georgian soldiers at Bagram. “But it does not mean we lock ourselves on the base.”

Georgia, a country of nearly 5 million people, has 870 troops in Afghanistan, while Romania is now the fifth-largest troop contributor, with 650 troops. Mongolia has 120 troops doing the sometimes risky job of base defense near the northern city of Mazar-e-Sharif. Even Iceland, which has no standing army, has two personnel pitching in for Resolute Support’s media and women’s rights campaigns.

Georgians are doing some of the few remaining foreign patrols, and Bosnian soldiers man checkpoints inside Bagram Air Field. By taking on these tasks, they free up other troops to concentrate on mentoring and training the Afghan troops who have taken over day-to-day fighting, said U.S. Marine Lt. Col Bradley Grosvenor, who works with the Georgians.

“We couldn’t do this job right now without them, with the troop caps and still wanting to have quality security,” he said. “It’s been huge — it means less Americans doing [base security].”

In Georgia’s case, Russia may have inadvertently pushed the country to keep a robust presence in Afghanistan. Georgia fought a brief but disastrous war against Russia in 2008 and sees eventual NATO membership as an important security goal.

“Our primary mission will be to become a member of NATO to provide a shield to protect from old enemies,” 1st Lt. Archil Chrelashvili said.

The day after the bombing that killed the six Americans, Babakadze led his soldiers, along with their U.S. Marine counterparts, to a previously scheduled meeting with the governor of Parwan province.

Twenty-eight Georgians have died in the war in Afghanistan, and the ongoing risks were illustrated that day, when troops on their way to the governor’s office walked by the charred remains of the motorcycle bomb that had killed the Americans.

Babakadze, who fought in the Russian-Georgia War and served in Iraq, where he suffered shrapnel wounds from a suicide bombing, shrugs off the danger.

“If you want help from someone, you have to help from your side also,” he said.