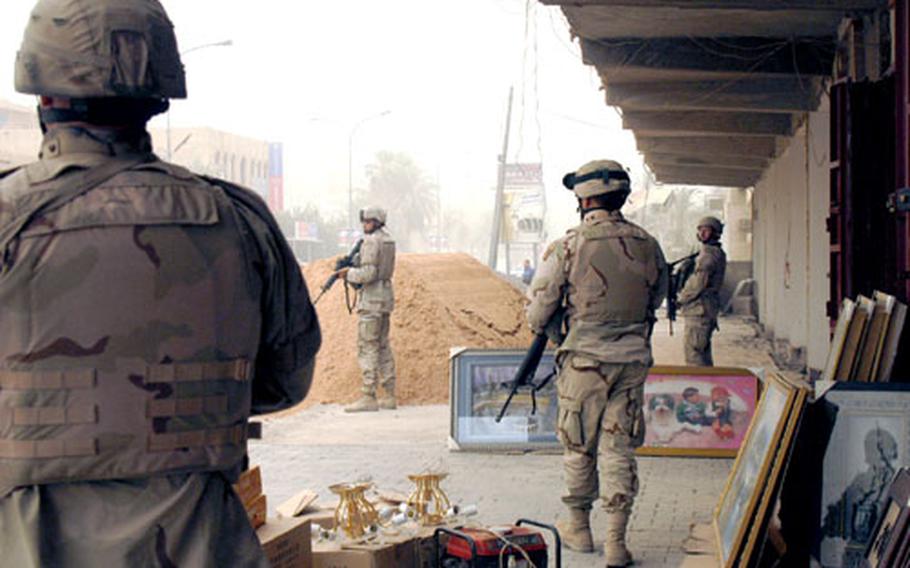 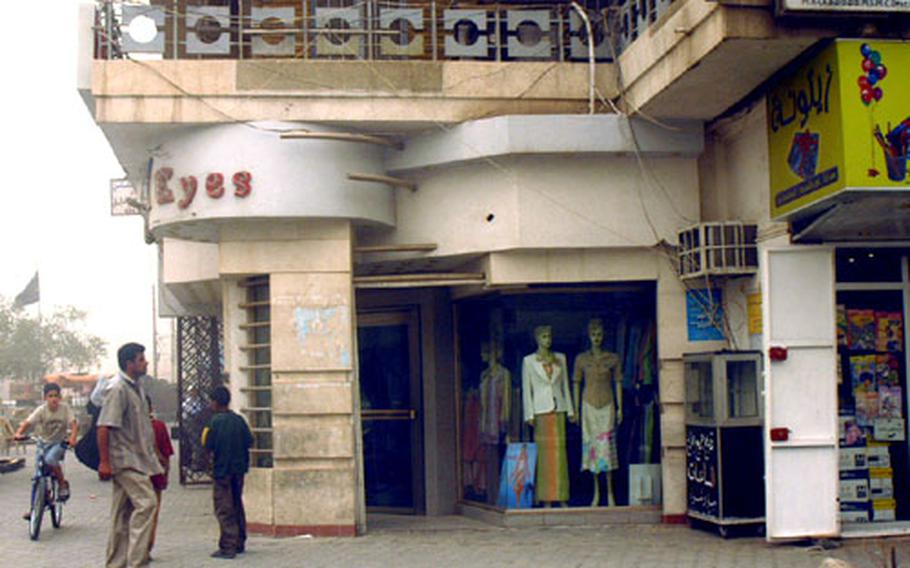 A street corner in Baghdad that soldiers from the 1st Platoon of Company A, 1st Battalion of the 156th Artillery in the Louisiana National Guard inspect when they are on patrol. (Teri Weaver / S&S)

BAGHDAD &#8212; So much can happen here in 12 hours. Ambushes. Car bombs. Drive-by shootings. Mortars. But sometimes, nothing happens at all.

The mix of stress and boredom wears on everyone differently, even within one platoon. First Platoon of Company A, 1st Battalion, 156th Artillery is made up of Louisiana National Guardsmen. On a typical Sunday this month, a convoy of armored Humvees leaves Camp Liberty before 7 a.m.

Its mission is familiar: Show a presence to ward off insurgent attacks while being ready to respond if they, or anyone else nearby, gets hit. The streets are familiar &#8212; they&#8217;ve been patrolling this area for about a month and a half now.

The platoon hasn&#8217;t taken fire in the past few missions, and some in the group think that means their due.

No one laughs at that.

Shortly after leaving the base, Sgt. Shane Garcie, 27, of Natchitoches, La., fires a warning shot at Iraqi traffic. A car got too close despite Garcie&#8217;s warnings; within the next hour, he&#8217;ll fire three more.

This platoon fires warning shots. They&#8217;ve lost three members already, including their lieutenant, Christopher Barnett, on Dec. 23. Barnett, 32, of Baton Rouge, La., had transferred to another unit a couple of weeks before he died, but he had been with 1st Platoon for years, and he was in many ways still its leader.

Two more from the platoon died in March from a car bomb.

During the ride, Morris talks about home. When the Louisiana National Guard was mobilized in May 2004, his son was 9. When he gets back this September, the boy will be two months shy of his 11th birthday. For Father&#8217;s Day, Morris asked for pictures.

The neighborhoods that 1st Platoon covers are a mix of poor, middle-class, and commercial. Some of the areas are so affluent that the houses have small, green yards. Some stink of sewage.

&#8220;I am the king of Slug Bug,&#8221; Garcie shouts, in reference to a game the platoon plays in which the first person in the vehicle who sees a Volkswagen Bug gets to punch, or slug, the others.

&#8220;We&#8217;ll do anything to keep ourselves alert,&#8221; says Morris who explains that the game is part of fighting boredom. They also talk about the architecture of the houses and what they would incorporate into their own dream homes. They talk about leave, the two weeks every soldier gets to go home. More than anything, they talk about going home.

After a short lunch, the platoon is back on the same roads. Stores are open now, selling jewelry, clothing, kitchen appliances, furniture, flowers, plants.

&#8220;Slug Bug,&#8221; says Spc. Philip Age, 20, of New Orleans. He&#8217;s replaced Garcie as the gunner, so that Garcie can get a break from the stifling dust and the pressure of constantly standing and looking for an attack.

At 2 p.m., the platoon checks in on a few families it has come to know. Kershaw, the medic, goes inside to see if he can help a woman who is sick.

A Western man treating an Iraqi woman proved challenging, he said later. She was having a problem that she didn&#8217;t feel comfortable discussing with Kershaw and a male interpreter. He was able to coax enough descriptions from the woman to take back a recommendation for a prescription. Next time he&#8217;s on patrol, he&#8217;ll take some medicine to the woman, he said.

Just before 4 p.m. the soldiers begin a walking patrol in a nearby commercial strip. They chat with merchants and use the opportunity to do a little window shopping. A couple of soldiers get some local phone cards, $10 each.

Around 5 p.m., Staff Sgt. Jonathan Meziere looks at his left hand, where his knuckles are scarred from burns.

Both soldiers died; there&#8217;s a picture of one taped to the ceiling above his old seat.

Meziere has had enough of memories.

After another hour, a driver suddenly slams on the brakes just parallel to Morris&#8217; truck. Age, the gunner, lets off a warning shot that flattens one of the driver&#8217;s tires.

The soldiers let him go.

First Platoon begins to make its way home. Children run after the trucks because another gunner has started throwing Tootsie Rolls. It&#8217;s a parade of sorts. Some of the adults wave, some don&#8217;t.

Then, finally, as the convoy turns onto a larger street, Morris pipes up.

Morris cheers and gives the requisite punches. Three within a few minutes. He raises both hands in the air, celebrating.

Just before 7 p.m. the platoon pulls back in to Camp Liberty.