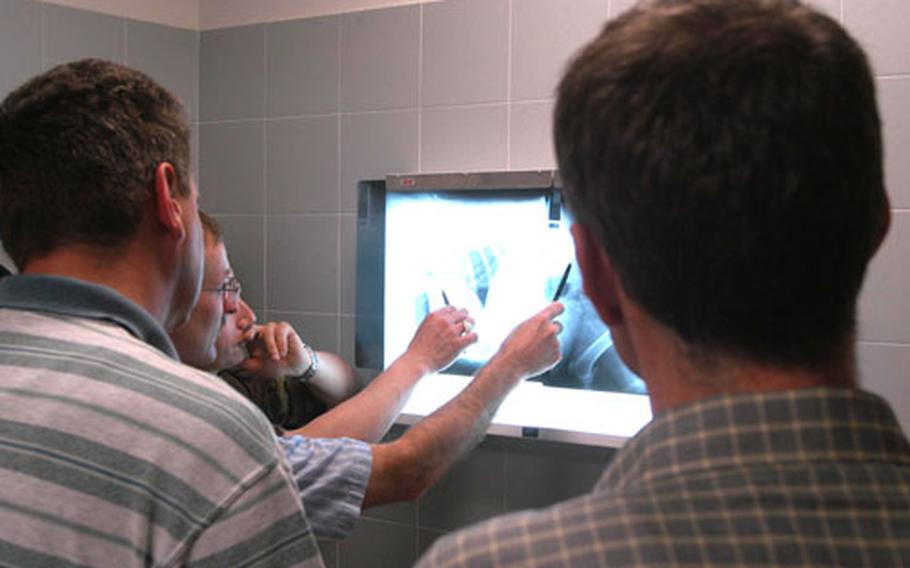 There was very little in the way of pomp and circumstance.

In fact, during a short stop at Aviano Air Base, three officers from the Slovenian army met more animals than they did Americans in uniform.

But the visit &#8212; the first by Slovenian military members to American bases in northern Italy since their country joined NATO &#8212; was exactly what the visitors had in mind.

&#8220;I got a lot of useful information &#8230; and documents, which I can use in my work,&#8221; said Maj. Brane Dolenc, one of three veterinarians who made the short trip west from their base in Ljubljana.

The visit, made under the auspices of the Partnership for Peace program, was hosted by the Army&#8217;s Southern Europe Veterinary Detachment based in Vicenza. The three Slovenians spent a few days at Caserma Ederle seeing how their American counterparts operate.

That included visits to the veterinary clinic in Vicenza as well as the commissary and dining facilities. Though many Americans probably know the U.S. vets best for taking care of their pets, that&#8217;s not their primary mission in Europe. Taking care of military working dogs and making sure the food that Americans eat is safe &#8212; two seemingly disparate missions &#8212; are higher on the agenda.

Dolenc said his unit does much of the same work.

Col. Peter Levstek said that Slovenian military veterinarians currently don&#8217;t care for the pets of military members, though they do treat working dogs and unit mascots.

Levstek was operating in the private sector in 1991 when the fledging country&#8217;s military asked him to start a working dog program. Dolenc and the other member of the group, Maj. Darko Semrov, joined the unit in 2000. They said they&#8217;re adding capabilities and missions as their country&#8217;s military continues to evolve. All three said they were impressed by the facilities, equipment and techniques the Americans use.

For his part, Maj. Tim Settle, the American vet detachment&#8217;s deputy commander, said a mobile laboratory that the Slovenians drove over with could be very useful for his unit.

It wasn&#8217;t the first time that Slovenian veterinarians had visited a U.S. military facility. Settle said every year the American vets host a conference in Germany and invite counterparts from other countries.

But Vicenza and Aviano are a lot closer to home. Aviano, where they visited the vet clinic and working dog compound, is less than two hours&#8217; drive away from the Slovenian border.

So was this the first of many visits by Slovenians in the near future?

Asked how it felt to be the highest-ranking Slovenian officer to visit Aviano, Levstek smiled.