‘Sleepy Hollow’ air base awakens with a roar 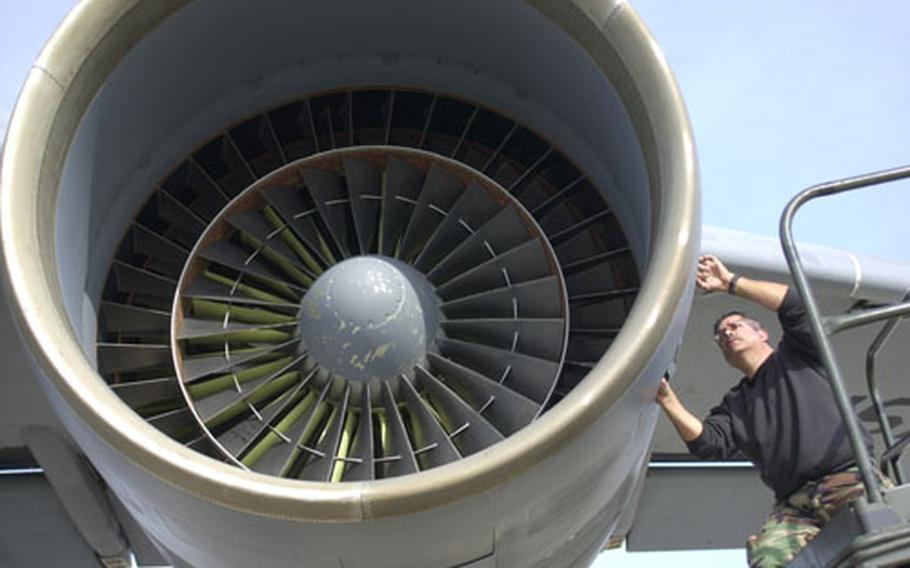 Air Force Tech Sgt. Ernest Pena works on a C-5 cargo aircraft at Morón Air Base in Spain. The base is bracing for an influx of planes and personnel due to the rotation of forces in Kuwait and Iraq in the next several months. (Scott Schonauer / S&S)

Air Force Tech Sgt. Ernest Pena works on a C-5 cargo aircraft at Morón Air Base in Spain. The base is bracing for an influx of planes and personnel due to the rotation of forces in Kuwait and Iraq in the next several months. (Scott Schonauer / S&S) 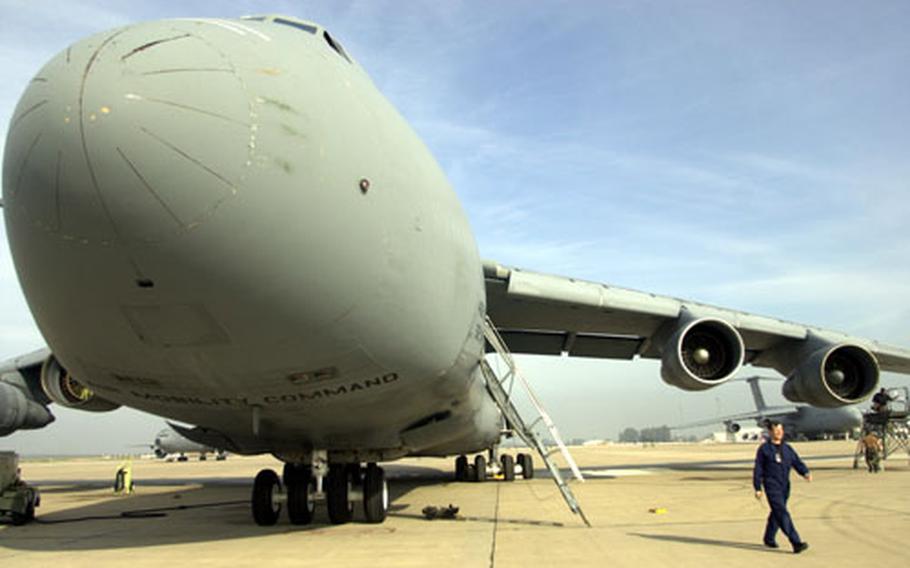 An airman walks on the ramp at Morón Air Base in Spain next to an Air Force C-5 cargo plane. (Scott Schonauer / S&S)

But since the Sept. 11, 2001, attacks against the United States, one of the Air Force&#8217;s smallest bases has been one of its busiest.

The military has relied on the airfield as a key pit stop for cargo planes ferrying troops and cargo to the Middle East and Central Asia. During the buildup for the war in Iraq, the base set records for the number of cargo tons and passengers flown and amount of fuel pumped.

Despite President Bush&#8217;s May declaration of an end to major combat operations in Iraq, the breakneck pace at Mor&#243;n has not let up.

That&#8217;s why the Air Force is sending some additional help. It is planning to station 25 to 28 more airmen in Mor&#243;n by the spring to help alleviate the workload. That might not seem like a lot of people to some bases, but with about only 100 airmen permanently stationed at Mor&#243;n, it is a population boom.

The base is so small that many airmen juggle four or five jobs to make things work. During the busy times, they can take on more duties.

Having more people will help airmen such as Master Sgt. Frederick Gambrel, the base&#8217;s communication maintenance manager, who also serves as a unit training manager, financial management officer, test proctor and physical training leader. An 11-hour day is typical for him.

Good time management is crucial to get everything done.

Airmen stationed there said that the base has not been this busy since the first Persian Gulf War in 1991.

Military cargo and transport planes have carried more than 80,000 tons of cargo and roughly 36,000 passengers. This is at a base that didn&#8217;t have a passenger terminal before the war.

Fuel specialists at Mor&#243;n have pumped an astounding 74.6 million gallons of fuel. That&#8217;s more than five times as much as what Aviano Air Base in Italy pumped.

Mor&#243;n is in southern Spain 35 miles southeast of Seville. In addition to the 496th&#8217;s 100 people, the base is home to a 15-person space surveillance detachment, under the direction of the Colorado-based U.S. Space Command. The base is supplemented by about 1,000 airmen sent on temporary duty.

The airfield also is an alternate emergency-landing site for the space shuttle during every launch from the Kennedy Space Center in Florida.

The base has no deployable units, but it has one of the largest ramps in Europe. The ramp is larger than either Rhein-Main or Ramstein air bases in Germany.

When the Pentagon launched Operation Enduring Freedom in Afghanistan, Mor&#243;n emerged as a major stopping point for planes. During the buildup for the war in Iraq, the military sent refueling tankers to the base.

Master Sgt. Michael Baker, the airfield manager, had the daunting task of finding parking spaces for the increased number of aircrafts.

He used a computer diagram with icons representing planes to make sure there was enough room.

Beginning this month, planes that ordinarily landed at Naval Station Rota on their way to the United States from Iraq will stop in Mor&#243;n instead. Repair work at the Rota airfield is the reason for diverting the air traffic up north.

Mor&#243;n is bracing for the additional planes by constructing more dormitories for plane crews and passengers. A small group of prefabricated units that can house 400 people will be erected within earshot of the runway.

It&#8217;s a big improvement over earlier this year, when airmen scrambling to find temporary living spaces put hundreds of cots in old warehouses and the gymnasium.

The base also is planning on boosting recreational facilities, giving a makeover to the recreation center.

The increase in aircraft comes as contractors finish a project that will include 37 new hydrant fuel pumps on the ramp. The work is scheduled to finish in January, helping planes land and refuel faster and more efficiently.

Base commanders have requested a wish list of base improvements. If troops remain in Iraq for years, chances are that the Air Force will continue to need Mor&#243;n.